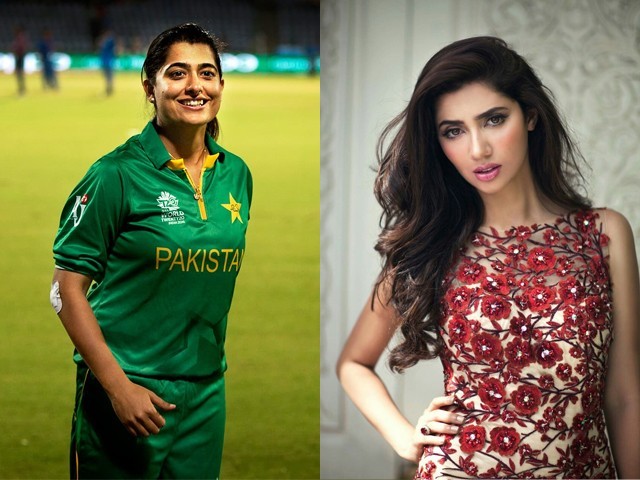 Sana Mir spoke out against the unnecessary emphasis on beauty products for women in sports, as shown in Mahira Khan’s commercial.

For this year’s World Radio Day, the United Nations Educational, Scientific and Cultural Organisation (UNESCO) picked a theme to encourage women in sports, and ran a worldwide campaign to promote sports culture in women. However, barring the issue of having a limited number of women in sports around the world, Asian women have an added dilemma to face, and that is the demand for women in sports to also look “glamorous”, so as to increase viewers’ interest in women’s sports.

There has been a demand for attractive female presenters in sports, giving looks preference over knowledge and interest in the game itself, and unfortunately, this phenomenon has spread out to the field as well. The case in point is a new advertisement featuring Mahira Khan which suggests that smooth and hairless skin is perhaps as important as being good at the game itself.

The ad did not go unnoticed, and became a big talking point in Pakistani media since former captain of the Pakistan national women’s cricket team, Sana Mir, spoke out against the unnecessary emphasis on beauty products for women in sports, as shown in the commercial.

To all young girls out there who aspire to take up sports.“Make no mistake: you need strong arms, not smooth arms, on…

Mir’s primary concern seems to be changing the priorities of young girls who want to represent sports in the future. To be good at their job and have successful careers, women aspiring to be sportswomen should be focusing on developing their skill and honing their talent, not on whitening their skin or removing the hair on their bodies.

Being a sports anchor, I have seen many young sportswomen who are conscious about their looks and feel it is important to wear sunblock to avoid getting tanned as they play. On the other hand, the sportswomen who are now used to the lifestyle have a different view on looking good. I remember a conversation I once had with a female cricketer about whether it is difficult to manage one’s hair or complexion on the field, and she suggested that when a player is on the field, such thoughts do not cross their minds at all.

Similarly, when Mir’s post started making the news, I had a brief chat with national swimmer Kiran Khan, who also has a very strong opinion on the entire situation. She strongly backs Mir for her approach by relating to it with her own experience.

“Ads should advocate girls towards success rather than constantly pressuring them to look fair and have good hair to get noticed. I have had bad hair days but it never stopped me from going to my training sessions. In fact, I have had days when I used to not wax my body hair because of a busy training schedule and competitions, but that did not lower my self-confidence, and I never thought of what people will think. Honestly, my appearance never mattered to me when I was training or competing, nor should it matter to any sportswomen because athletes are always meant to be tall, broad, strong and raw. Advocate girls to be strong, not sassy!”

On the contrary, for a person like myself who was born and brought up in this country where more than half of the population belongs to the conservative mindset, this sort of ad doesn’t really resonate with the masses either. We are in a country where fully covered sportswomen are still struggling to get accepted, despite setting many records on the field.

Talking about the real facts here, which I have witnessed personally, if the viewers of the game here accidentally encounter Pakistani sportswomen playing, they raise their eyebrows and wonder where our future is going, since women who should be holding rolling pins to make rotis are holding cricket bats instead. The families of female athletes discourage them, and keep reminding them to consider what people will think. Parents feel concerned that if their daughters are out playing a man’s game, what good families will come asking for their hand in marriage? Thus, for sportswomen in this part of the world, there are bigger concerns then just having silky smooth skin.

I have asked various female athletes what their biggest challenges are given their profession, and most of the time, the response is support; first from their families, and then by the society. A while ago, there was a commercial showing a Pakistani girl who follows her dreams to play cricket, and as a result, her father doesn’t speak to her for months. The ad was thoroughly criticised for its progressive message, and was later banned. All of this is closer to reality for our sportswomen.

Conversely, the commercial in question isn’t relatable at all; not in the way Mahira looks, to how she managed to play basketball in six inch heels or a constricting dress that no sportswoman in Pakistan, given their limited earnings, could easily afford, or manage to play in. The creators of the ad might have forgotten that the life of an athlete, male or female, is not quite as simple as showcased in the commercial. What would make such sports-based ads marginally more relatable is if they actually cast real sportswomen to successfully represent the struggles that come with the job.

This is one reason why most people came out in support of Mir’s post, happy to see her defending the values over sponsorship and defend the interests of the real life girls who are interested in pursuing sports; girls who should not feel conscious of doing so at the expense of their looks.

Another reality which cannot be ignored is that women in our country spend thousands of rupees on a regular basis on items such as fairness creams and other “beauty” products, despite knowing they capitalise on insecurity. This makes it more important to appreciate Mir, and hopefully her speaking up will encourage other women of this country to conduct a self-assessment and be more sensible about their priorities.

I hope the next time advertisers think about presenting a sports-based commercial for women, they will keep all these facts in mind and promote the importance of women having ‘strong arms’ rather than ‘smooth arms’.