Adolf Hitler and Narendra Modi, what are the similarities? 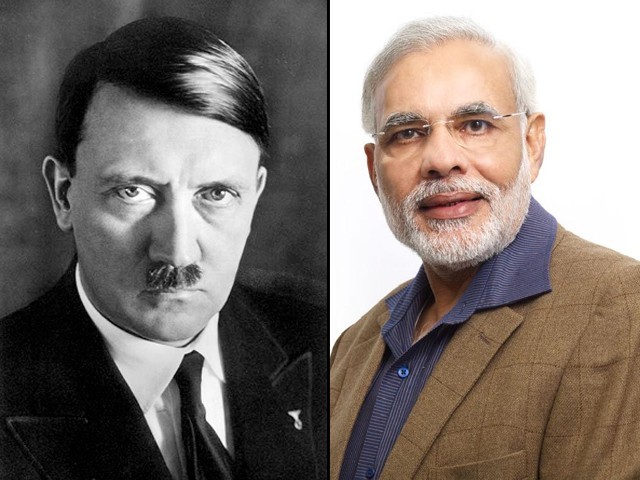 The Gujarat chief minister, who claims that Takshashila is in Bihar and that Alexander the Great had been defeated by the Biharis (when the truth is that his army never crossed the Ganges) and who passes off his version of nationalism as secularism, cannot be that leader.

If there’s one thing that is common among all the great dictators and demagogues – from Adolf Hitler, Benito Mussolini, Slobodan Milosevic to Narendra Modi – it is their uncanny adroitness in garbling and falsifying facts so as to mislead the masses and thus, suit their nefarious designs.

It seems Hindu nationalist leader and Bhartiya Janta Party’s (BJP) prime ministerial candidate Narendra Modi – who finds himself in hot water over his alleged involvement in the 2002 Gujarat riots – has learnt a lesson or two from Herr Hitler’s shenanigans.

But, alas, as I mentioned earlier, facts have little or no importance to such despots.

Hitler never believed in socialism in the first place, for he knew it was big industrialists and landlords who would pour money into the party coffers and he was supposed to work for their interests.

Who cares a fig about the wretched, poor masses?

Although the very name of the Nazi Party proclaimed it as ‘socialist’, Hitler was even vaguer on the kind of ‘socialism’ he envisaged for new Germany and thus, offered an outlandish, heretofore never-heard-of definition of a ‘socialist’ in a speech on July 28, 1922, which would make one hold his stomach and roll on the floor with laughter:

“Whoever is prepared to make the national cause his own to such an extent that he knows no higher ideal than the welfare of his nation; whoever has understood our great national anthem ‘Deutschland ueber Alles’ to mean that nothing in the wide world surpasses in his eyes this Germany, people and land – that man is a socialist.”

Ha! I, for one, do not know whether to laugh or cry at this ludicrous statement made by Herr Hitler, for this sounds more like a definition of a ‘German nationalist’.

So therefore, in my opinion, we will not be doing injustice to the great dictator by assuming that for him nationalism and socialism was one and the same thing.

There’s apparently a big question mark over Modi’s secular credentials by virtue of his alleged role in the riots too. Time and again, he’s been asked to spell out his views on secularism and his idea of India. But, just like Hitler, he chooses to obfuscate and mislead the public and in this manner, tries to offer a bizarre method behind his madness.

“They want me to spell out my views on secularism. But, what is the definition of secularism? For me, my secularism is ‘India first’. This is my secularism,” Modi said while addressing a rally during his whirlwind election campaign.

Voila! That’s secularism. I get it.

Nevertheless, just to make sure that I heard him right, I looked for the definition of secularism in the dictionary so as to enlighten myself.

According to it secularism is,

“The view that religious considerations should be excluded from civil affairs or public education.”

That’s secularism for the whole world and I hope Modi gets a chance to read this. Comprehension of it maybe in question, but at least the definition is out there in the open for everyone to see.

Thus, the Indians, who might not have India as their first priority due to their religious beliefs or any other reason, would also be considered secular if they believed in the aforementioned definition of secularism and acted accordingly.

By not following Modi’s fantastic ‘India first’ secular doctrine, they will not become traitors.

But, why should facts bother the Hindu nationalist Modi. He’s been criticised so often by his opponents for staging ‘fake encounters’ with facts, but such criticism, unfortunately, roll off Modi like water off a duck’s back.

A pluralistic country like India needs a secular leader who will not discriminate against any fellow countryman because of his religious beliefs and will treat every Indian as an equal, not as a second or third-class citizen.

The Gujarat chief minister, who uses a puppy analogy while referring to the deaths in 2002 Gujarat riots, who claims that Takshashila is in Bihar and that Alexander the Great had been defeated by the Biharis (when the truth is that his army never crossed the Ganges) and who passes off his version of nationalism as secularism, cannot be that leader.

It’s time to ring the curtain down on Modi’s dissimulation.

Modi, however, will do a great service to himself and India by voluntarily casting off the cloak of ‘nationalism’ behind which he takes refuge, so as to hide his true self.

“Patriotism is the last refuge of a scoundrel.”