Can India trust Modi’s ‘anguished’ words in his blog about Gujarat Riots? 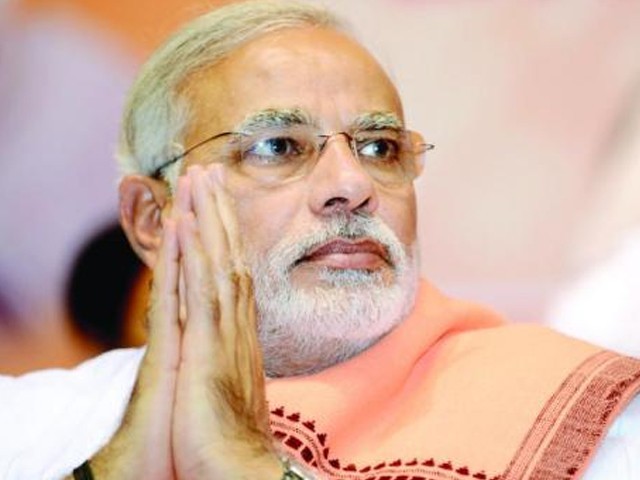 Is Modi's 'anguished' blog an apology or is it simply a strategic move to position him as a moderate leader just a few months before the general elections? PHOTO: AFP

In the 1920s, Gandhi withdrew the first non-cooperation movement against the British Raj when the protesters turned violent and killed some policemen in Chauri Chaura, Uttar Pradesh. In spite of strong resistance from fellow freedom fighters, Gandhi cancelled the first serious large scale agitation against the imperial power because it went against his philosophy of non-violence.

Moreover, Gandhi is renowned for observing several fasts during his long public life in order to maintain religious harmony in the country.

Bear in mind, it was much before the arrival of Mahatma – as Gandhi was popularly called – in the political arena, that King Ashoka of the Mauryan dynasty turned to Buddhism in remorse for killing thousands in pursuit of a conquest of a neighbouring kingdom.

King Ashoka was a legendary ruler whose rule extended over the entire Indian subcontinent from the capital of Pataliputra, that is, modern-day Patna. This incident occurred more than 2,000 years ago when the violence shook him so much that he almost gave up his power and became a propagator of world peace and communal harmony.

Penance and compassion, it seems, have been an integral part of the Indian subcontinent’s history. Anyone who intends to rule India cannot last without this cultural asset and redeeming quality.

It is for this reason that the scrutiny of Narendra Modi – the prime ministerial candidate of the Bharatiya Janata Party (BJP) – has to be more intense than any other mortal. One feels the need to assess not only his political credentials but also the contributions that he has made in enriching the pluralistic traditions of the country.

Can a man who, as the chief minister of Gujarat, presided over the killing of more than 1,000 people and remained immune to the sufferings of the Muslim minority in his state, be allowed to become the premier of a multi-ethnic, multi-religious nation?

Modi cannot and should not, escape this question.

Recently, he offered an explanation for the happenings in 2002 and how hurt and anguished he felt after the incident. He even wrote a blog about his 12 years of silent suffering for the communal violence that killed hundreds of Muslims at the hands of Hindu fundamentalists.

This was his first public explanation of an incident that has been described by different analysts as genocide, pogrom, massacre and even ‘ethnic cleansing’.

No other communal riots in post-independence India have attracted so many terrifying adjectives.

As expected, the timing and nature of Modi’s ‘anguish’ laden blog has raised questions.

Is it an apology or is it simply a strategic move to position Modi as a moderate leader just a few months before the general elections?

I am fairly confident that not only his critics but even his hardcore supporters would vouch that whatever the Hindu right-wing leader wrote in his blog was nothing but a strategic move to sugar coat his image before the impending elections.

It seems obvious to the people that by offering this belated explanation for the 2002 religious riots, the BJP leader is trying to reshape the debate about him. Modi wants the Indian public to think that the man who aspires to be the leader of the country has a kind heart.

Unfortunately, Modi’s laboured explanation is too little, too late and does not offer any hope for reconciliation and justice to the victims.

What is even more interesting is the timing chosen by Modi to stage his emotional outpourings. His explanation came only a day after the verdict of a local court in Gujarat which exonerated him from any wrongdoing in the killing of more than 70 Muslims inside a housing society in Ahmedabad. The petitioner was a 74-year-old woman who was seeking justice for the brutal killing of her husband who had been a former parliamentarian.

It seems that the chief minister of Gujarat considers this acquittal from a lower court to be a big victory before his march to the throne of Delhi. Unfortunately, this victory of his is a defeat for the families who have been at the waiting end of justice.

Modi’s blog conveniently overlooked the sufferings of these people who lost their dear and near ones. It is silent on the delivery of justice to them and only talks about his ‘personal grief’ and ‘silent suffering’ over the riots.

So, the question arises whether Modi is morally and conscientiously capable of offering an apology for the tragedy that his Muslim subjects went through under the very nose of his administration. After all, he built his political career on the ashes of the innocent victims of the riots and the religious and social polarisation that took place after the communal violence, benefitted Modi in not one but three elections.

During his three terms as the chief minister of the state, Modi never attempted to reach out to the minority. On the contrary, he played on the prevailing prejudices of the majority against the Muslims and exploited the religious tension to the hilt.

Modi and his administration made no attempt to reconcile two communities who have co-existed for centuries. In fact, he did the opposite. If one were to go back in time and see the language that Modi used after the 2002 riots to win votes, one would see that it was not the language of contrition and anguish; it was the language of revenge or victory.

He even refused to visit the relief camps where the families of many victims took shelter and his refusal seemed to justify the tragedy.

Modi then went on to promote and protect those who were involved in the riots. A female legislator was made a minister despite the charges of murder against her but she was forced to resign later when a court convicted her for the crime and gave her a life sentence.

With such heinous acts under his belt, in my opinion, the BJP leader lost the moral right to apologise a long time ago. But then, why is there no intense media scrutiny of this man who aspires to be the leader of India, when he has been an active participant in such immoral acts?

India’s corporate media treats him with kid gloves and there is hardly any debate about the appropriateness of the man for the post of the prime minister. In fact, for quite some time there has been a concerted attempt to promote Modi as a mascot of development who can usher in a new economic dawn to the nation.

It is obvious that the large industrial houses, which are promoting such a divisive character as the leader of the nation, have their economic interests in mind only and are not concerned about the bigger harm that he and his ideology can bring to the well-being of the country.

There is no doubt that the majoritarian agenda that Modi represents would harm the pluralistic character of the nation. His ascension has the potential to strengthen all the forces that want to see India as a hard-core Hindu nation. It would give legitimacy to his deeds in 2002 and it would set the wrong precedent for the country because Modi is quite literally the anti-thesis of what India has always represented, and the compassion that should define a ruler is definitely not his hallmark.

So perhaps we need to be asking a different question: does India deserve a prime minister who cannot feel the pain and suffering of his own people?