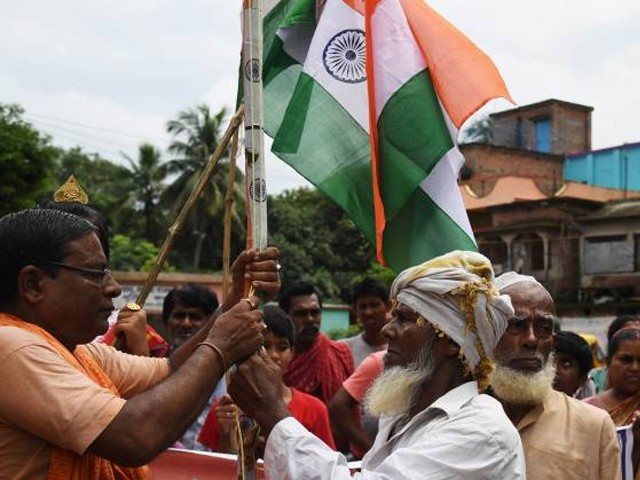 Indian Prime Minister Narendra Modi, while addressing the Lok Sabha on Wednesday, poured scorn on the Congress party, blaming its flawed policies and self-indulgence for the Partition of the subcontinent. His over an hour-long speech, amid rising slogans from the opposition, was punctuated with gesticulations and anti-Gandhi family barbs.

There was no reference to the contentious Rafale deal, the details of which Defence Minister Nirmala Sitharaman refused to divulge, for they were “classified”. The prime minister, almost two months after accusing the Congress of conniving with Pakistan “to influence Gujarat elections”, once again attempted to divert the attention. Though still a very popular figure, Modi’s charm seems to have evaporated, to some degree, as the country still awaits “ache din” (good days).

Escalating criticism of his policies has often culminated in Modi harking back to Congress, making them count their mistakes, leading to the “backwardness of India”. But little did he know that another parliamentarian not from the Congress, the fulcrum of his Wednesday monologue, but from his own Bhartiya Janata Party (BJP), had another history to tell.

Vinay Katiyar, a member of the upper house – Rajya Sabha – told a news agency that the country’s Muslims, who amount to 14% of the total population, had “partitioned India”.

“They (Muslims) have partitioned the country on the basis of population. So why are they here? Muslims have been given their share. They should go to Bangladesh or Pakistan,” he said.

Katiyar follows a long list of BJP leaders having a dubious distinction of frequently targeting the country’s largest minority group. Just days ago, he had blamed “pro-Pakistani” elements for violence that broke out in Uttar Pradesh’s Kasganj district on this year’s Republic Day. A person had lost his life and Katiyar indicted Muslims even before a proper probe was launched.

The Hindu nationalist BJP arrived at the helm of affairs in 2014, with its prime ministerial candidate Modi promising “sabka sath, sabka vikas” (together with all, development for all). However, PM Modi and his ministers, in their almost four-year rule, have repeatedly ratcheted up the anti-Muslim rhetoric, appealing to the majority community.

The ruling party in India, as soon as it came to power, undertook an arduous task of forging a “collective Hindu identity”, one of the foundations of the party’s political philosophy, Hindutva. The edifice of this “collective Hindu identity”, just as any other nation, is based on the identification of “an other”, against which one defines oneself. The BJP leaders take a leaf, literally, out of Bunch of Thoughts, a book by MS Golwalkar, Rashtriya Swayamsevak Sangh’s (RSS) second Sarsanghchalak (supreme leader).

About Muslims and Christians, Golwalkar had asked if “they were true to their salt and grateful to their land” which brought them up.

“Do they feel that they are the children of this land and its tradition and that to serve it is their great good fortune? Do they feel it a duty to serve her? No! Together with the change in their faith, gone is the spirit of love and devotion for the nation,” he had written.

The alacrity, with which the BJP leaders label Muslims as Pakistanis in India, and their localities as mini-Pakistan, is creating crevices in India’s social fabric.

“They harbour pro-Pakistani sentiments, they lure Hindu women to later convert them to Islam, and they eat beef,” are some of the common refrains used for the Muslim community in the country today.

However, it’s the acceptance of this meticulously constructed discourse, with a tacit approval of the government that sets the alarm bells ringing. The prime minister has been a mute spectator; the party, instead of reprimanding repeated offenders, has often rewarded leaders with tainted pasts and history of communal utterances. In 2017, after a thumping majority in Uttar Pradesh, the BJP made the Hindutva mascot, Yogi Adityanath, the chief minister of the state.

Another parliamentarian from Karnataka, Anant Kumar Hegde, gained notoriety in 2016, calling for the “end of Islam”.

“As long as we have Islam in the world, there will be no end to terrorism. If we are unable to end Islam, we won’t be able to end terrorism,” Hegde had told reporters, urging them to report his statement.

The leader was later “proud” of what he had said, and was made a minister in the 2017 cabinet reshuffle.

India has been the embodiment of diversity for 70 years, and Hindus and Muslims, apart from living in the same locality, have even shared food from the same plate. But no action is taken against blatantly communal politicians and withdrawal of riot cases; for instance against those accused in the 2013 Muzaffarnagar violence have emboldened the fringe to take the law into their own hands. The cruelty against the Muslims in the name of cow protection and “love Jihad” has increased to menacing levels. One such unfortunate episode surfaced recently from Rajasthan when an 18-year-old boy brutalised a 45-year-old Muslim man, forcing him to utter “Jai Shri Ram” (long live Ram). The boy shot the video and circulated it on social media.

In December 2017, another Muslim labourer was bludgeoned to death and his body was set on fire. The assailant had also recorded the occurrence and warned the entire community of the same fate, should they indulge in “love jihad”, another bogey of the ruling party.

The loyalty of people of India and Pakistan, the two archenemies, is often calculated on the barometer of hatred. The more you hate the “other”, the more loyal you are to the country you live in. Leaders from the ruling dispensation are unremittingly engaged in normalising the “Muslims synonymous with Pakistanis” and “their localities with mini-Pakistan” narrative.

The genesis of the “mini-Pakistan” reference lies in the Partition and a series of communal riots over the last 70 years, coercing Muslims to seek homogeneity. However, these Muslim ghettos are not the lone representatives of India’s social fabric; a confluence of several religions, ethnicities and castes. It’s this social fabric of the country that the BJP is determined in destroying to create propitious grounds for its long-standing dream of a Hindu rashtra (nation).

India goes to elections in less than a year-and-a-half time, and the prime minister and his foot soldiers have already hit the ground running. Almost four years after its decimation, the opposition is still in complete disarray. Though it is all but certain that the BJP will come back to power once again, the ruling party will not leave any loophole for the Congress to capitalise on. For the prime minister, who accuses the Congress of playing divisive politics, his ministers will continue to create many fictitious Pakistans in India.