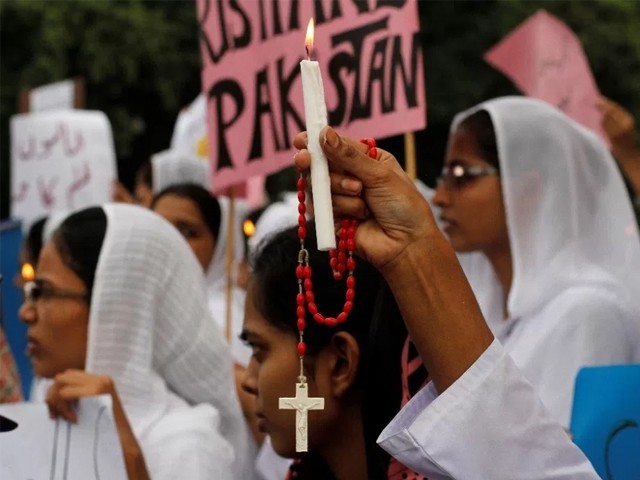 Members of the Pakistani Christian community hold candles during a protest rally to condemn the suicide attack in Peshawar on a church in Lahore, September 23, 2013. PHOTO: REUTERS

It happened again; this time in a closed setting with a small group of people. We were just a bunch of colleagues having fun, most of who will probably have a good laugh and forget about it in within the hour. But will I forget it so soon? My past experiences, the history of which is entrenched into my memory, remind me that perhaps this will not be so easily forgotten.

I believe the last time something like this happened was back in school, during my O’ levels; then too, between a group of friends. I don’t seem to remember it well, so it probably did not affect me as much back then. We were, after all, children, and the kids saying it to me had most likely heard the word as a categorisation of people from my community from their parents or elders.

As far as I can recall, it never happened again, until now. I can, however, remember a few instances where colleagues preferred not to share a meal with me. Other than that, I’ve never felt like an outcast, and have never been made to feel differently by my peers or my friends. Yet, none of those millions of earlier instances of brotherhood and affection seemed to console me that day as I struggled to forget what had happened. During a friendly and jovial game, my colleague – someone who sits in the cubicle right next to mine every day, and a man I used to call my friend – insulted me by calling me a “bhangi”.

The term “bhangi” refers to cleaners, sweepers or garbage pickers; those who are unfortunate enough to not have had the resources we educated people have had while growing up. In this case, however, bhangi was a derogatory word to insult me, because it is a word the populace associates with Christians.

Days after the ordeal, I kept questioning why I was referred to with this word, and why it was an insult reserved for me out of all the colleagues present in that room. Was I singled out like this just because I was beating him at a game? I suppose it hurt more because the colleague is someone I considered a dear friend of mine. I began to wonder, is this how he had perceived me and referred to me in his mind all along? I then wondered if this is how Christians like myself are still perceived by the educated and experienced people, who work in the same companies, in the same designations as us.

At first, I was angry. I thought I should file a complaint with HR regarding the matter. It is, after all, against personnel principles and ethics to pass inappropriate remarks and target someone because of their religion. But then I stopped myself, because what good would it do? Bringing attention to this issue, dragging myself into the limelight, when this was hopefully a one-off event? Wouldn’t it just make things worse? I could simply ensure it never happens again, by not allowing myself to be as close and as good of a friend as I used to be to my colleague.

In retrospect, even if the HR department processed my complaint, would disciplining the person even have achieved anything? Would he actually have felt that he was in the wrong to refer to me by that word? After all, if that person had the capacity to realise what he had said was wrong on so many levels, he would have realised it by now and would have apologised for his actions and tried to reconcile with me. However, that did not happen, and probably never will. I say never will, because even after the incident, when a few of my colleagues reprimanded him and tried to make him see his error, the discriminatory attitude was so engrained in the psyche of this educated fellow that he refused to accept his wrongdoing.

What appalled me further was that later he tried to make a reference to my sacred scripture to try and justify his actions. The fact that this man would single me out like this and verbally assault me to the point that others would intervene in the matter, convinced me that someone I considered my friend had never thought of me as the same. Perhaps from the moment he met me and discovered my faith, he had considered me a “bhangi”, and only tolerated my presence because I was unfortunately at the same level in the company as him.

My personal experience pushed me to recall conversations with my family and friends, where they too discussed instances similar to my own. My father, for example, who diligently worked for the same company for almost four decades, all the while achieving and surpassing sales targets but always being passed over for promotions.

Even my young cousins have faced discrimination in schools and colleges by their classmates, and sometimes, also by their teachers. They all felt the same way – dejected. Not only because of the treatment itself, but more importantly, because they never expected such actions from people they interacted with regularly, people they trusted, and people they called their friends.

This incident was thus a reminder that I am not alone in facing discrimination, and most likely face it a lot less than others in my community who are not as fortunate or privileged as I have been. As we move from the urban to the rural sphere, the frequency and intensity of such instances increases in proportion.

In my experience, while Christians living in rural areas face constant and harsher forms of discrimination, nonetheless most Christians I know end up feeling a sense of discrimination in the work place or otherwise. This may emanate from slight issues, such as people talking about you in a derogatory manner behind your back, refusing to share a meal with you or hesitant about inviting you to their homes. But it may also escalate towards blatant prejudice, as you are repeatedly passed over for promotions and other opportunities.

From a young age, my parents taught me that even though everyone is not the same, they all deserve equal respect and acceptance. Perhaps if all parents taught the same to their children, Pakistan might just become a more tolerant and peaceful nation. I may not forget what happened to me for a long time, but I intend to not let this affect my life in Pakistan or let this be a cause to harbour hate against anyone else, regardless of their religion, caste, colour or creed. But this does not stop me from hoping that people recognise how they treat others, and realise that being in a majority does not give them the right to ridicule, target or mock those who belong to a different community or sect.

I sit here and write this because as a minority who wishes to cause no trouble, I have no other means to speak out and get this off my chest. To anyone in Pakistan who has faced discrimination or abuse because of the community they belong to, please focus on the positive experiences, of which there are indeed many. It is perhaps the only way to continue.

To all my Muslim friends, colleagues and brothers who have never discriminated against me, belittled me, or made me feel like an outsider, and have wholeheartedly accepted me into their lives, I would like to thank you. Thank you for your kindness and acceptance. It is only in light of people like my colleague that the true essence of your kindness stands out and makes us realise that yes, Pakistan has many bigots, but it is also a nation of many kind-hearted people, many of whom I am happy and proud to call my friends.

My hidden miscarriage left me broken and alone – while he moved on, happily