Donald Trump’s America is awfully racist and discriminatory, but is Pakistan any different? 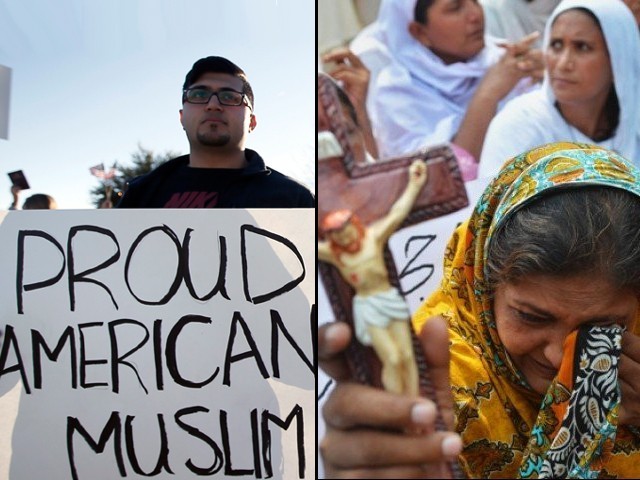 How tolerant and fair is the Muslim majority in Pakistan towards its minorities?

Q: Mirror mirror on the wall, who’s the biggest racist of them all?

A: The human race

Recently, I came across a video which showed a young Palestinian-American Muslim mother talking about the struggle of handling her young daughters. This was in reference to race and religion in the current political climate raging in the US. Her talk made me ponder about the truth of raising my kids in the US. And for a moment, it made me second guess my decision of moving to the American shores some 20 years ago.

Welcome to the American world of Donald Trump.

A world where race is an issue, where being a Muslim, an African-American, or belonging to the Jewish faith gives one pause, unlike before. Where being parents to school going Muslim kids puts one in a position of preparedness to answer questions, unlike before. And I would like to emphasise on the term unlike before, because it really is unlike before.

Following the wreck we call the Trump train, I had to answer social and cultural questions put forward by my kids:

“Why can’t I wear short shorts?”

“Why is my curfew earlier than everyone else’s?”

“Why do you have to pick and drop me everywhere?”

Those were hard questions, but ones I had been preparing to answer since I became a parent. But these recent issues of race are entirely alien – especially in a country that prides itself on being ‘the land of the free and the home of the brace’ – and I find myself unprepared and on unfamiliar turf.

It takes me back to Karachi during the 80s and 90s. The rise of Muttahida Quami Movement (MQM) had Karachi’s diverse population feeling uncomfortable because they were being made to answer the following question,

“Will you be leaving Karachi and moving to your province of origin?”

Was my experience any different than that of the young mother and daughters she mentioned? Were my mother’s feelings any different from the way I feel today, when it was gently suggested to her that maybe my parents should consider leaving Karachi.

And many of our family friends actually did leave.

Therefore, however much I may try to pretend that the reality of race is something I’ve faced for the first time, it’s not entirely true. As for religion, yes. But then it’s because I belong to the majority Muslim sect in Pakistan. Everyone living in Pakistan does not hail from the same sect as I do.

Thirty years ago, when I was in school, an incident took place and I can vividly recall it even today. A biology teacher was very insensitive and mean to a 15-year-old Ahmadi girl. Hence, the truth remains that Ahmadis, Hindus, Christian, Sikhs and other minority religions face discrimination in Pakistan too.

How tolerant and fair is the Muslim majority in Pakistan towards its minorities? Not really, is it? Therefore, why expect fairness from our adopted countries when our country of birth is the same?

The real truth is that we easily succumb to racial and religious profiling in our country of origin too. The only difference may be that we were the majority there, while in the US we find ourselves on the other side of the fence.

And it’s not too much fun to be on the other side, now is it?

So how different is our children’s experience in the US when compared to the young Ahmadi girl in my school? Actually, if truth be told, it may be better. No teacher can tell them to their face or in front of a class that since they are non-Christian they need to leave the classroom. No, that does not happen in the US, that too at an expensive private school such as the one I attended in Karachi.

I set out with the intention to discuss dealing with the questions my children encounter about belonging to a different race and religion and how I answer those questions. And while that is true, I most certainly have to be truthful in saying that I come from a similar place, where minorities were and still are mistreated. Bengalis and Makranis for the colour of their skin and other minorities for their accents or religion.

Tragically, the truth remains that the human race is racist in nature; it thrives on creating differences and conflicts and it enjoys the plight of the minorities and plays the victim card while doing the same. And while I want to tackle the racist truth of the US, I want to acknowledge that I come from a place that is not much different.

There the minorities are different, but discrimination a little worse. Take that truth my fellow humans, and swallow it too.