From slaps and shakedowns to metal rods and death, the evolution of corporal punishment 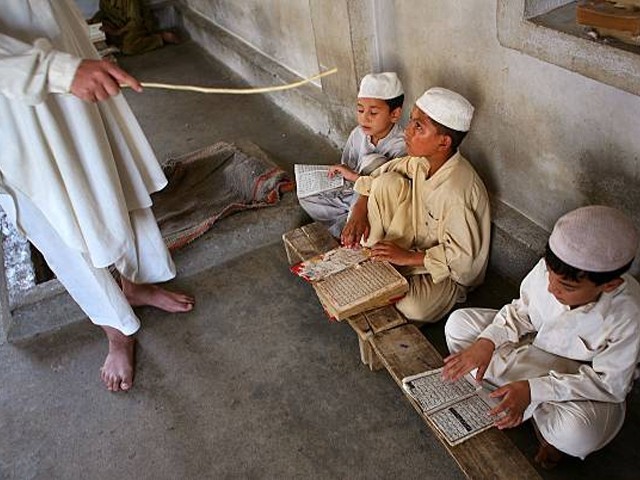 Students at an Islamic studies school, or 'madrassa' are told to study verses of the Koran September 10, 2006 in the Sakhacot Tribal Area of western Pakistan. PHOTO: GETTY

This new year has been a horrific one for the children of Pakistan so far. Days after the brutal murder of little Zainab, nine-year-old Muhammad Hussain’s Quran teacher beat him with a metal rod so badly that the boy died.

Unshaken and unrepentant, the teacher has since justified the murder as a simple case of a teacher disciplining his pupil that accidentally went horribly wrong.

This is the Mullah who beat an 8-year-old student Muhammad Hussain to death at a Madrassa in Karachi's Bin Qasim Town pic.twitter.com/oAlLpDv4Qh

Most of us still have memories of the slaps and shakedowns from our childhood. In my family, enough time has passed that we are now able to laugh about how my mother would use the threat of a coat hanger to wake me up in time for school.

But, as a lawyer, the cases of child abuse I have seen are far, far more sinister and serious than the occasional small slap or shake I remember from my childhood. And perhaps most disconcerting is the fact that cases like that of Hussain’s (and there are many, many Hussains from the madrassas of Lahore to the mosques of Langkawi and London) are remarkably predictable and preventable.

The abused is usually a boy, the abuser usually a Quran teacher – a literal man of God, in whom the parents have put a near blind trust in to protect and propel their child towards prosperity in both life and the afterlife.

But perhaps what is most distressing in cases like Hussain’s is how easily preventable a child’s abuse (and, often, his death) can be.

Children are unlikely born the conniving, calculating people they are capable of growing up to be, which means most abused children either simply tell their parents exactly what’s going on with them (because the naivety of childhood means grownups are still their allies and their almighty, powerful protectors) or they exhibit very obvious signs of distress (like complaining about body aches that have a mysterious onset before going to the place or seeing the person that is the source of their stress).

But because parents, many of whom have personally experienced some form of corporal punishment as children, have stupidly internalised and accepted aggressive measures of child discipline as an effective, ordinary part of childhood. And so, these parents wind up making perhaps the biggest mistake of their lives by downplaying or downright dismissing their little one’s complaints as a run-of-the-mill ‘this is the way these religious teachers and their Quran lessons go’ situation.

Cases like Hussain’s are so disheartening and devastating because of the ways in which so many grownups fail the Hussains of the world.

My blood boils not only because of the abominable actions of the accused but also those parents who could, should and would have known something was off had they just thought to slow down, start paying attention and stop treating their child’s physical and mental wellbeing as a given.

My blood boils because of the non-existent child protection system in Pakistan, which despite being signatory to all the appropriate child-protection international bodies of law, is still so incapable of actually following the laws it loves paying lip service to.

My blood boils because I know that right now, there are 1.8 million little ones enrolled in 13,000 madrassas across the country and because it’s only a matter of time until we hear of another Hussain.

That’s why I propose that lawmakers legislate in a way that punishes not just a child’s abuser but also imposes liability on and holds accountable those in a child’s life who so horribly neglect and so badly fail to protect them.

The current generation of parents doesn’t get to make the same excuses as the previous generations of parents (who bred like rabbits because more children meant more sources of income for the family).

Because most of us are now choosing to have children (for reasons beyond having some free labour hanging about), the set standard of parenthood and the onus on us to be watchful guardians over societies’ most vulnerable is and should be higher.

So where perhaps the prior generations of parents can be let off the hook for being not-so-attentive (often downright negligent) caretakers,  we get to have no excuses for failing the very same children who we have so willingly chosen to bring into this crazy world.

Because even wild animals know to rally behind, nurture and protect their young.