Can someone in Pakistan please address the ever-growing elephant in the room? 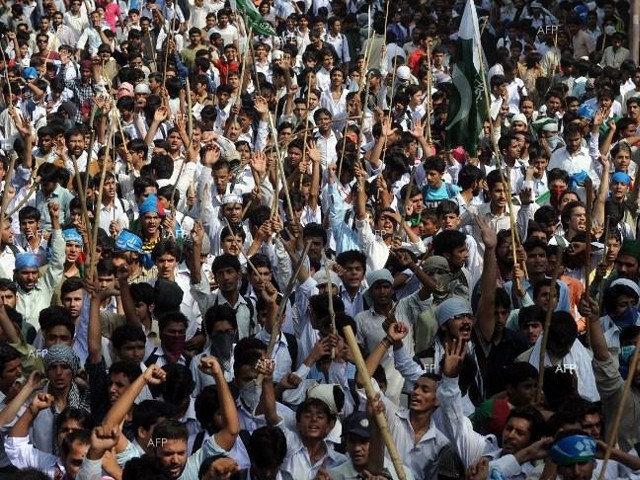 Pakistani activists of the hardline Sunni party JI shout anti-US slogans near the US consulate during a protest against an anti-Islam movie in Lahore on September 19. PHOTO: AFP

The way a doctor needs to address a patient’s critical problems first, before evaluating the less threatening ones, a country too needs its public policy practitioners to tackle its grave issues before moving to its trivial ones.

We can build all the roads, metro buses, and Orange lines as envisioned by the government ruling the centre, or we can start focusing on health and education as proposed by the opposition instead. However, there is absolutely no way to meet the needs of Pakistan’s people if the population continues to grow as it has been for the past seven decades.

Today, Pakistan’s population makes up 2.62% of the total world population (200 million out of seven billion). More astounding is the fact that although East Pakistan had a greater population than West Pakistan during Partition. Today, the population of Bangladesh is 30 million less than that of Pakistan. Even in India’s case, the population at the time of the 1951 census was 361 million and today it is 1.31 billion – a 262% increase. It is still approximately half of what Pakistan experienced over the same period. This goes to show that the increase in population in today’s Pakistan is considerably greater than its South Asian neighbours.

While the population of our country has amplified exponentially, the resources unfortunately haven’t increased at a rate to sustain this growth. The per capita water availability has reduced from 5,260 cubic metres in 1951 to 1,032 cubic metres today and is expected to further decrease given the sharp increase in population and limited water supplies.

According to the United Nations (UN), if the per capita availability of water falls below 1,700 cubic metres, then that area is identified as a region experiencing water stress, whereas below 1,000 cubic metres is identified as a region experiencing water scarcity. Pakistan is expected to soon fall in the category of a water scarce country, which should be a cause of concern for policy makers.

In terms of infrastructure, West Pakistan inherited 8,122 kilometres of railway tracks at the time of independence, which according to a liberal estimate stands at 11,881 kilometres today, a slight increase of 46%. The road network today stands at approximately 270,000 kilometres from 50,367 kilometres at the time of Partition. This is also less than Pakistan’s population increase.

Thus, despite the tall claims that our lawmakers continue to make, these statistics show that the road and rail network availability per capita has, in fact, seen a decrease since Pakistan’s creation in 1947. Currently, we face a shortage in some of the most fundamental resources such as electricity, natural gas and crude oil, the demand for which continues to increase with an amplifying population.

Even Pakistan’s average Gross Domestic Product (GDP) growth, since Partition, is approximately 3.5% and has not increased following the increase in population.

Wheat production, however, has outpaced the population growth and grown at around 600%, thanks to the use of modern farming techniques and government incentives for farmers.

Many of the problems that currently plague the country including illiteracy, lack of specialised labour, pollution, urbanisation and inflation can all be indirectly attributed towards the population explosion in Pakistan.

Let’s delve further into the problems of illiteracy and lack of specialised labour in the country. When the school system of a country does not even have the resources to cater to its increasing population, it is only natural for most of the population to remain illiterate, or turn to alternative options like madrassas.

None of Pakistan’s universities are ranked amongst the top 500 in the world, and the higher education sector enrols less than 4% of the age cohort, compared with 11% in India and 32% in Malaysia. This only goes to prove that our higher education facilities are not even close to being sufficient enough for our population. The major percentage of the population does not have the resources to invest in higher education, and many people are opting for unskilled and menial jobs which do not help the economy.

Another result of an increasing population is a rise in pollution. A growing number of cars and other means of transport that use fossil fuels surges air pollution, which can lead to smog. Furthermore, large swathes of areas have been converted into garbage dumps in urban areas. Apart from these issues acting as major eye sores, they are also health hazards and serve as rich breeding grounds for diseases causing microorganisms.

Moreover, there is a dearth of job opportunities in the rural areas which results in mass migration to urban centres. This has resulted in a disproportionate increase in population in cities like Lahore and Karachi, and has led to uncontrolled urbanisation. This larger population calls for a greater amount of commodities from food and housing and thus results in inflation due to the mismatch in supply in demand.

Despite all these facts glaring hard at the country’s lawmakers, no major political party has a population control policy in its manifesto. Most of the programs launched, till date, have been worked on half-heartedly with the help of donations from developed countries. And all that has done is raise conspiracy theories in an already conservative society.

Unfortunately, in today’s Pakistan, even speaking about population control is considered a taboo and is treated with caution. Although improbable, we can also begin to see a change at ground level when leaders like Imran Khan and Nawaz Sharif begin to tackle these issues. It’s important to note that a rapidly growing population is one of the most pressing issues in Pakistan today, and it requires immediate and effective intervention.

The writer is a LUMS graduate currently working in the marketing team of Sapphire. He tweets @MAliIlahi (twitter.com/MAliIlahi)

Is PML-N the most liberal regime Pakistan has seen in recent times?