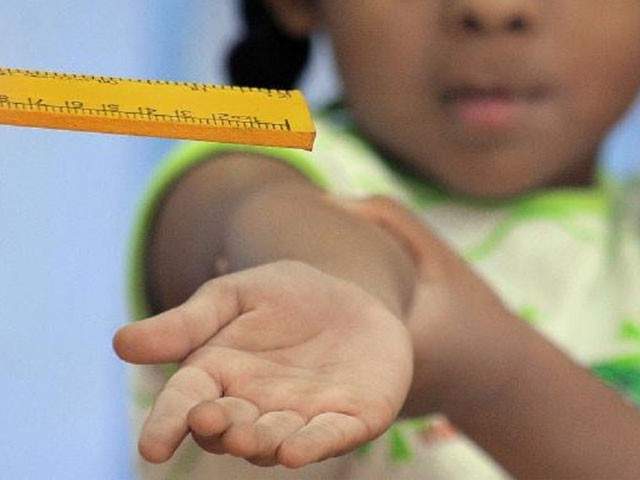 The recent death of Hunain Bilal only brings to light the tragic reality of corporal punishment. PHOTO: AFP

The recent death of teenage student Hunain Bilal in Lahore only brings to light the tragic reality of corporal punishment among the countless unethical but socially accepted norms in the Pakistani society. Allegedly, Hunain had failed to memorise his lesson, due to which the teacher “punched him repeatedly, grabbed his hair and hit his head against the wall, all the while yelling at him”.

As a result, the child collapsed and died on the spot. Hunain’s case is not rare in Pakistan where corporal punishment is considered the best way of disciplining at both home and school. Although a 2014 National Assembly Bill prohibits it, it continues to be rampant in schools and madrassas. According to the Islamabad-based non-governmental organisation (NGO), Society for the Protection of the Rights of the Child (SPARC), nearly 35,000 high school children refuse to continue education in the fear of corporal punishment. This is a huge number for a country that claims that its youth is its future.

In a survey conducted in 2014 by the Society for the Advancement of Education and, the now defunct campaign, Alif Ailaan, over 73% of government school teachers and over 78% of private school teachers were in favour of corporal punishment for disciplining. These high numbers reflect teachers’ incognisance regarding the counterproductive and adverse psychological, emotional and social impacts of physical and verbal abuse on young minds. It is more troubling to note that the percentage is higher in private schools, which charge by the nose for ‘quality education’.

It is important to add here that no discourse on corporal punishment for children can be limited to educational institutes because it is also highly pervasive in homes. In their book ‘The State of Pakistan’s Children’, Samra Fayyazuddin, Anees and Zarina Jillani map out a trajectory of child abuse in the Pakistani society. According to their research, boys are victimised more than girls and mothers are more physically violent than fathers. Whether it is at home or in school, the use of physical aggression or severe verbal hostility has proven to be counter effective when it comes to disciplining.

It has proven to breed aggression, hostility, negativity and aversion to adult presence. Children who suffer from corporal punishment at home are tuned to this aggression and bring it to their schools. These children battle with humiliation, depression and feelings of anger and helplessness. When they turn to their parents for help, the situation is normalised by being told that it is “normal and happens to everyone”. When left to fester, the long-term consequences of this abuse include decreased self-control, criminal behavior in adulthood, negative child-parent relationships later in life, an inability to form and maintain healthy social ties and an extreme distrust of others.

Educationists who understand the short and long term detrimental effects of any form of verbal or corporal punishment upon children strictly discourage any form of hitting even between students. In fact, no physical touching is allowed in some schools. However, this becomes a losing battle when parents engage in it at home. When sending children to school, parents have to understand that both institutions are paramount in the holistic upbringing of the child. Hence, synergy between the two is imperative. Just as parents have to take into immediate account any inappropriate punitive measures practiced in school, they also need to cooperate with the school when requested to cease the administration of physical or verbal abuse at home. Without both institutions working in healthy accordance, the by-product, the child, is bound to be crippled.

The American Association of Pediatrics (AAP) suggests disciplining strategies in order to stop or correct unwanted behaviour. These include praising acceptable behaviour as opposed to criticising unacceptable behaviour, setting ground rules and sticking to them, developing a bond of love and trust between the adult and the child and modelling the required behaviour. Out of all these, modelling has proven to be the most efficacious. If a parent or educationist feels that the child’s behaviour is beyond their control, they need to consult with each other rather than resorting to extreme measures that furnish no resolution.

Needless to say, the cycle of aggression against children at home or at school cannot be condoned under any circumstances. With extensive psychological, educational and social research to back the long-term negative effects of such violence, no excuse for it can be or should be considered acceptable. Educationists have a serious responsibility of not only imparting education to the child but cultivating a healthy, happy and morally-grounded human being too. It is a grave responsibility and cannot be shouldered successfully without parental cooperation. Let us make the world a happier place and say no to corporal punishment.