There is no excuse for hitting your child, Adrian Peterson 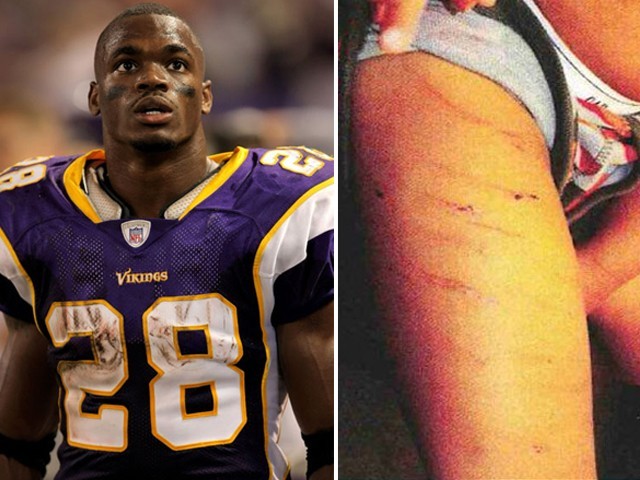 Adrian Peterson, an NFL player for the Vikings, has been indicted for beating his four-year-old son.

The principal at the school I went to was notorious for canning its students. Every morning, right after the assembly was over, we would see a few students standing in a corner, waiting for him to arrive and give them a sound ‘punishment’ for all the ‘mischief’ they had caused. I, too, at times was told to accompany this separated lot and often cringe, even today, at the thought of those blows.

Back then, it was a norm. A teacher could beat up a child and everyone would be fine with it. Sadly, the situation hasn’t changed much today. We still come across cases in which teachers beat students under the guise of ‘disciplining’ them and many parents still side with this form of punishment. But this is not the worst thing that can happen to a child.

The worst is when even parents end up slapping, punching, beating or spanking their children. We have had many discussions focusing on the various forms of corporal punishment exercised in schools, but have never thought of what the child goes through at home with their parents. We have never spoken about the lines that have to be drawn there first. And that is exactly why Adrian Peterson, an NFL player for the Vikings, has been indicted for beating his four-year-old son.

Peterson is a renowned American footballer who was charged with child abuse for hitting his son. In his defence, he stated that he was only trying to discipline his son “the (same) way I was disciplined as a child”. And that right there is the main reason why universally parents still resort to physically hitting their children to make them more obedient. The vicious cycle continues, where parents resort to physical abuse because they themselves were subjected to it when they were young.

I come across many parents who believe that spanking their child is still the best way to make them understand and, to be honest, I am flabbergasted by their responses. These are educated, well-established, middle-class parents, just so you know, and their sense of parenthood is truly astounding.

They don’t understand that when you hit a child you give them the idea that their body is no longer their own. That an outside entity can harm them and make them feel pain, and that’s alright. Often, many children who fall prey to sexual abuse do not speak up about it because of this very reason. They have been conditioned to believe that an adult can treat them however way he or she pleases, and there is nothing that the child can do to stop it.

In a way, parents who hit their children are worse than those individuals who sexually molest them.

Because when a child is molested by a stranger, the kid has an unconscious idea that they will be protected by their parents if they go and tell them. But what happens when the child is physically abused by his or her parents themselves? To whom should they go to find protection then?

The Prohibition of Corporal Punishment Bill 2013 was a major step in Pakistan towards curbing the practice of beating up children at school. But what about when they get a beating at home? Why is there no law protecting the child from an abusive parent(s)? There is no definitive statistic for the amount of children beaten at homes because rarely does any household think of it as wrong to hit a child.

I remember a parent once asked me,

“Do I not have even this much of a right over my child to hit him if he is doing something wrong?”

The answer is a clear and resounding no. No. No. No.

Those parents who take up the excuse of ‘disciplining’ their children should know that hitting a child is never productive – researches have proved that. In fact, other, non-violent alternatives, like grounding the child or making him or her think about what they have done are much more effective techniques.

Corporal punishment is not unique to Pakistan. In India, in February 2013, an 11-year-old boy was tortured with hot iron and was locked away at a madrassa for more than a week. Similarly, another seven-year-old Indian girl was hospitalised after her teacher beat her up for not reading loud enough. According to a report, in Nepal, 14% students drop-out of school because of the way teachers would thrash them. In Bangladesh, public schools and madrassas are notorious for chaining students and beating them for the slightest of issues. In Sri Lanka, in 2012, a number of students were admitted to Marawila and Bandarawela hospitals after receiving severe beatings from their teachers.

This issue is present throughout the region.

And why is it so?

Because subcontinent’s society imposes the idea that a student is supposed to respect his or her teachers, and they do this by the use of fear. A teacher believes that a student will respect them only if the student is afraid of the teacher. And the same is relevant for parents. But this is not how it works. And this is something that should not, in anyway, be deemed appropriate.

Peterson, being an NFL player, couldn’t wriggle his way out of this case of allegedly abusing his own son. This should be a clear message to all that no matter what you think, the civilised world will not tolerate a child getting hurt – even if the attacker is his or her own parent or teacher.