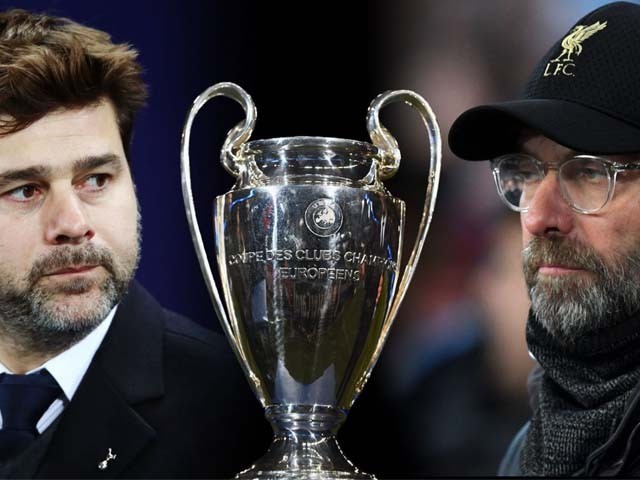 Tottenham and Liverpool meet in the UEFA Champions League Final at the Estadio Wanda Metropolitano on June 1, 2019. PHOTO: GETTY

The 2019 Champions League final in Madrid will be reminiscent of the English final of 2008 when Manchester United beat Chelsea in Moscow to lift the trophy. However, this time around, Liverpool are contesting for their sixth European crown and only their north London rivals, Tottenham Hostpur, stand in their way.

It may come as a surprise to many that Mauricio Pochettino’s men have qualified for the final of Europe’s biggest club competition but there is no denying that the Lilywhites have been in a sublime form this season. On the other hand, Jurgen Klopp’s side have reached the final for the second successive year as the German boss is aiming for his first silverware at Anfield. Although Liverpool and Spurs could not win their domestic titles, they were both dominant in Europe.

Will Klopp finally be able to win his first cup with the Reds or will Pochettino leave Spurs with an everlasting memory before his evident departure?

Klopp’s arrival at Anfield greatly improved the side and the players have since formed a formidable partnership, coming in second place in the English Premier League (EPL) this season behind Manchester City by just one point. Furthermore, the Reds have been in exquisite form in Europe for the last two years as they have beaten some big guns. Their dominance in Europe sent Bayern Munich and Barcelona home after Liverpool comprehensively beat their German and Spanish rivals. Their historic comeback against Barcelona was a match for the ages. Can Klopp’s team finally succeed in the Champions League after 14 years? Let’s take a look at some of the factors that will come into play in the final.

There is no doubt that Mohamed Salah, Roberto Firmino and Sadio Mane can easily break down any defence given that the trio have scored 56 goals between them this season in the EPL. Moreover, the front three continued their marvellous form in Europe too when they scored on numerous important occasions to help Liverpool qualify for the next stage. Mane was the man to watch at the Allianz Arena when the Senegalese single-handedly manhandled the Bavarians in their own backyard. Apart from them, James Milner often adds his name to the score sheet with his sublime penalties. Liverpool’s ferocious attack at Anfield in the semi-final was the reason the Reds are in the final. Thus, breaking down Spurs’ defence at the Wanda Metropolitano stadium should not be a difficult job for Klopp’s players. Mohamed Salah of Liverpool celebrates after scoring a goal to make it 5-0.

Virgil van Dijk will be the player to watch out for against the Lilywhites in Madrid. The former Southampton man is the main reason behind Liverpool’s astonishing performance this season as the big Dutchman has provided a great amount of support to his team due to his heroic defending at the back. The stout centre-back has been in phenomenal form in his first full season at Anfield and it will be hard for Spurs to traverse Liverpool’s defence with Van Dijk patrolling the back.

Even before the arrival of Klopp, Liverpool had been a strong competitor in Europe. The team mounted a remarkable comeback against AC Milan in 2005 when the side triumphed under the leadership of Steven Gerrard. The Reds once again faced Milan two years later in final, but this time the Italian rivals avenged their earlier defeat. Liverpool had a long drought in Europe after 2009 but that ended when they reached the final against Real Madrid in 2018.

The depth of Liverpool’s European experience will be the key, and it should not be forgotten that Liverpool qualified for the Europa League final in 2016 as well, against defending champions Sevilla. But despite Liverpool’s prowess in Europe, it looks like the Lilywhites are fully prepared for one last battle in Madrid. Pochettino’s name will be written down in Tottenham’s history books as the Argentinian boss has played a fundamental role in developing the north London club with his master tactics and sheer determination. Although the former Southampton manager is still aiming for his first trophy at the club, his leadership has changed the course of things as Spurs have emerged as one of the most intrepid warriors in England. The Champions League final of 2019 is Spurs’ biggest match in recent decades, and it looks like Pochettino has a few tricks up his sleeve too.

Tottenham Hotspur have become a courageous attacking side ever since Pochettino has been at the helm. Their splendid display against Ajax in the Netherlands proves their attacking potential. With the likes of Lucas Moura and Harry Kane at the front, the team has the required talent to lift the European crown. Although Kane is still recovering from his injury, the presence of Chrsitian Eriksen and Dele Alli will give a huge boost to the side. Heung min Son has been one of the best players for Spurs this season. The South Korean international gave a flawless performance against Manchester City in the quarter-final when his three goals over two legs helped Spurs thrash the Citizens. He has four goals this season in Europe and Pochettino will surely be relying on Son in the final.

As the Lilywhites prepare for what looks like their last game under Pochettino’s command, their lack of European experience might prove detrimental since their opponents have an illustrious history in Europe which they can capitalise on. The north London side might not be able to sustain the enormous pressure that comes along with the biggest game they’ve played in years. Players at the Tottenham Hotspur Training Ground on May 15, 2019.

As both the English sides are adamant to showcase their abilities in Spain tomorrow, given the circumstances and Liverpool’s stellar form this season, I’m hopeful for an exciting clash between the two sides. I predict either a 2-1 or 3-1 victory for Liverpool.