Messi vs Salah: Can Liverpool defeat Barcelona in their own backyard? 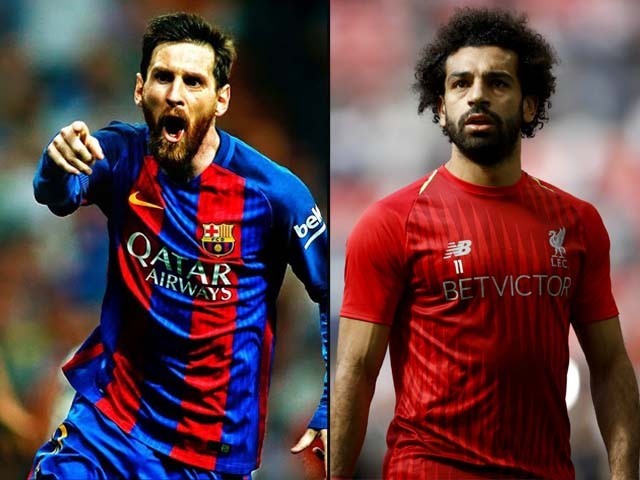 Liverpool will undoubtedly be preparing for the Messi onslaught.

It has been 16 years since Liverpool last got their hands on the Champions League trophy, but Jurgen Klopp and his players will be hoping that the drought ends this year. The team will be travelling to Camp Nou to face the recently crowned Spanish champions, Barcelona, in what promises to be a mouthwatering Champions League semifinal. Will the Reds repeat their 2007 victory at Camp Nou or will Ernesto Valverde’s men emerge triumphant? FC Barcelona team celebrate the victory at the LaLiga Championship during the match FC Barcelona against Levante UD, for the round 35 of La Liga played at Camp Nou on 27th April 2019 in Barcelona, Spain. Photo: Getty

Liverpool’s performance this season in the Champions League has been labelled a fluke by some, while others have called the team brilliant. Honestly, Klopp’s men have been in pretty good form this season in Europe and it is foolish to suggest that they have reached the semifinal due to sheer luck. The Reds were placed with French champions and Italian giants, Paris Saint-Germain (PSG) and Napoli in group C. Although it was a real test for Liverpool, they managed to reach the last 16 and emphatically beat Bayern Munich 3-1 on aggregate before demolishing FC Porto in the quarterfinals.

It is no surprise that Barcelona made it to the semifinals this season after they easily navigated Tottenham Hotspur, Inter Milan and PSV Eindhoven in the group stages. They further cemented their status as potential title winners after defeating both Lyon and Manchester United. Barcelona’s self-belief will also be bolstered by the fact that they won the La Liga over the weekend.

The upcoming match could go either way and there are some crucial factors which may end up deciding which way the pendulum swings. Liverpool have emerged as a truly formidable side in their past two seasons. Roberto Firmino, Sadio Mane and Mohamed Salah have formed a deadly partnership upfront and have found the net on numerous occasions in the Champions League. Breaking down Barcelona’s defence at Camp Nou is no easy feat, but it looks like Klopp’s side may be up to the task.

Virgil van Dijk is arguably the best defender in Europe at the moment. The big Dutchman ensured that Liverpool conceded only two goals in their last four matches in the Champions League. Further, he managed to score a decisive goal at the Allianz Arena against Munich. His performance at Camp Nou could potentially decide which team gets the upper leg. Does this man even need an introduction? Even those who do not follow football are aware of his prowess. The five-time Ballon d’or winner has scored over 40 goals this season in all competitions, and Liverpool will undoubtedly be preparing for the Messi onslaught. He ran circles around the Manchester United defence at Camp Nou just two weeks ago, scoring a brace against one of the best goalkeepers in the world, David De Gea. The little magician has found his lost form again and is a clear contender for the Ballon d’or this season. For more than a decade, he has proven himself to be the single biggest threat that any club can face, and Liverpool will have to ensure that the Argentinian isn’t allowed to run rampant in his own stomping ground. Lionel Messi of FC Barcelona, celebrate the Championship with the trophy during the Spanish Copa del Rey match between FC Barcelona v Levante at the Camp Nou on April 27, 2019 in Barcelona Spain. Photo: Getty

Barcelona have been dominant in Europe, winning the coveted Champions League trophy in 2006, 2009, 2011 and 2015 respectively. While Liverpool made it to the final of the Champions League last year, they have been nowhere near as prolific as Barcelona in the tournament. Liverpool’s inexperience in the league over the past decade could prove to be the difference between the two sides in the semifinal.

Former Liverpool players who now call Barcelona their home, such as Luis Suarez and Phillipe Coutinho, will be instrumental in helping the Catalans overcome Klopp’s men. The likes of Ivan Rakitic, Sergio Busquets and Ter Stegan ensure that Valverde will have plenty of players to choose from for his starting lineup. Valverde has the benefit of leading a squad in which many players have tasted Champions League glory before, and that extra bit of experience may help push Barcelona over the edge.

Also, the fact that Liverpool are still battling against Manchester City for the top spot in the Premier League could mean that the players are a little more tired than the Barcelona squad. The first leg of the semifinal will be a close battle and I predict either a 2-1 Barcelona win or a 1-1 draw. Although one must keep in mind that in the past 41 matches at Camp Nou between Barcelona and an English opposition, the English sides have won just two matches. Interestingly, both of those matches were won by the same club – Liverpool.