For Ajax, the Champions League final beckons, but will the Spurs spoil their party? 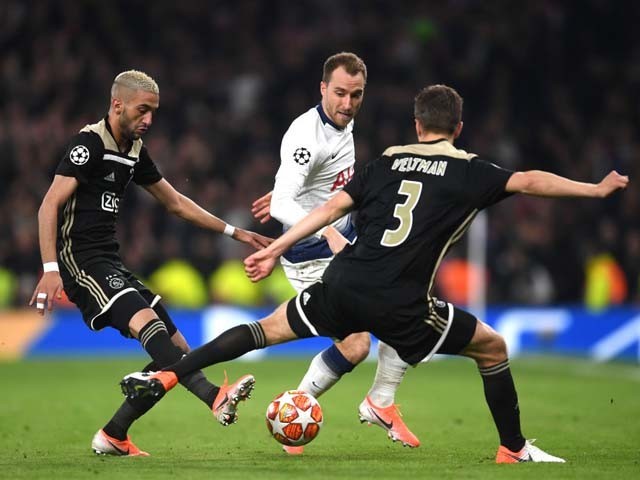 After 22 long years, Ajax are in the semi-finals of the Champions League and have been absolutely dominant in Europe this season. After eliminating current champions Real Madrid from the competition, they continued their dream run by defeating Juventus at Turin. Erik ten Hag’s side surprised everyone when they extended their stellar form against Tottenham Hotspur and won 1-0 in the first leg of the semi-final at Tottenham Hotspur Stadium.

Can Ajax retain the lead or will the Spurs reduce the deficit when the two sides meet in the Netherlands? Ajax’s players pose for a team photo ahead of the UEFA Champions League semi-final first leg football match between Tottenham Hotspur and Ajax. Ajax’s success story in Europe this season has been quite remarkable. It may sound outlandish, but Ajax have not lost a single match away from home in this tournament against German champions Bayern Munich, current Champions League holders Real Madrid, Italian champions Juventus, and English rivals Tottenham Hotspur. The Dutch side has remained unbeaten away from home this season on Europe’s biggest stage.

Additionally, their young players have formed a formidable partnership and continue to threaten the big guns of Europe. As Ajax get ready to welcome Tottenham at Johan Cruijff Arena tonight for the second leg of the Champions League semi-final, they will know that they only need to retain their 1-0 lead to qualify for the dream final at Wanda Metropolitano Stadium in Madrid. By contrast, Tottenham had a modest European journey before the knockout stage. The team had managed only one point in their first three games but stood firm and regained their focus and potential. They came second in the group stages, behind Barcelona, and went on to eliminate Borussia Dortmund in the round of 16. However, their real test came against English champions Manchester City in the quarter-final. Spurs convincingly beat the Citizens 1-0 at home before losing 4-3 in a dramatic clash at the Etihad, thus qualifying for the next stage due to their away goals. But Mauricio Pochettino’s men failed to find the net against Ajax in the first leg of the semi-final and allowed Donny van de Beek to score the only goal of the night.

Will Spurs reduce the deficit in Amsterdam or will the Lilywhites qualify for the biggest final in European club football? Here are some players to watch out for and some factors to keep in mind for the clash.

The return of Heung min Son

Hueng min Son, along with Harry Kane, has perhaps been the best player for Spurs this season. The South Korean has stepped up on numerous occasions to help Spurs in tricky matches and played a fundamental role against Manchester City in the quarter-final. His ferocious shot was enough to wrap up a 1-0 victory for Spurs in the first leg before he scored an elegant brace at the Etihad. Unfortunately, he picked up a yellow card in that last encounter and missed the first leg against Ajax at home. His presence at Johan Cruijff Arena will be a big boost for Pochettino as the midfielder has four goals to his name so far in this tournament. The Lilywhites have a lethal attacking squad as Christian Eriksen, Lucas Moura, Dele Alli, Son and Kane all have the potential to find that crucial breakthrough. It should not be forgotten that Fernando Llorente often adds his name onto the goal sheet with his neat and timely strikes. Thus, Tottenham definitely have the capacity to break down Ajax’s defence. Ajax know how to play football in the highly competitive Champions League. The team has cemented its position as a Dutch powerhouse in Europe for decades now. They won the 1995 Champions League and were the runner-up the following season when Juventus lifted the trophy.

There is no doubt that Ajax have proven themselves to be a remarkably consistent side this season. Their victory against some big European clubs this season is proof of their marvellous potential. Given that the Dutch side will have the advantage at home against Spurs, a draw will be enough to take Ajax to the final. Kane is easily one of the best strikers to have ever played for Tottenham. The Englishman can easily navigate past rigid defences and is a deadly finisher. He has five goals this season in Europe but it is still doubtful whether he will be able to play against Ajax due to his ligament injury. His absence will further shrink Spurs’ chances of winning at Johan Cruijff Arena. The young Ajax captain is all over the news at the moment given that his goal at Turin against Juventus took his side through to the semi-final. The Dutchman has been in impressive form this season and is one of the reasons behind Ajax’s historic run in Europe this season. He will be a big threat to Spurs since his terrific defending prevented Tottenham from scoring in the first leg. As the north Londoners prepare to travel to Amsterdam to battle for their fate in Europe, I predict either a 1-1 draw or a 1-0 win for Ajax. Although the sun has still not set for Spurs, the circumstances look difficult and they will need to put in a great performance if they wish to progress to the final of the Champions League.