Why is the US making a mountain out of the Masood Azhar molehill? 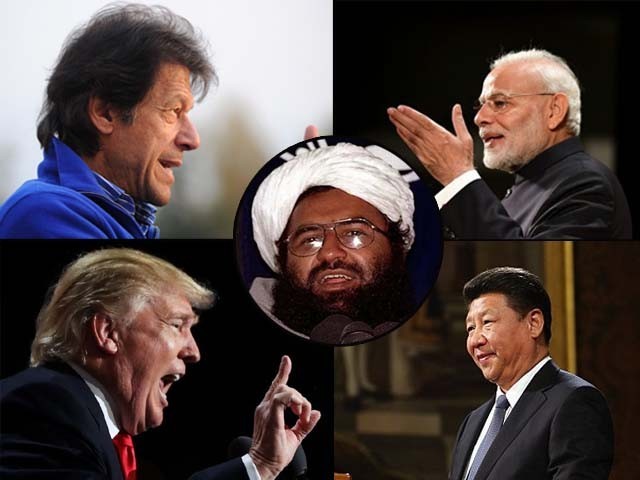 The reality Pakistan must now face is that the US is squarely focused on provoking China and for this, India will remain a key ally of Washington.

The United States has introduced a United Nations Security Council (UNSC) resolution to blacklist Masood Azhar as an international terrorist. Azhar is the leader of Jaish-e-Mohammed (banned in Pakistan since 2002) and has been blamed by India for masterminding February’s Pulwama incident, even though no evidence has been produced which links Azhar to the incident.

China has refused to list Azhar as an international terrorist after careful consideration of the definition of international terrorism according to international law. China has made this position absolutely clear and as such, it would appear that the US is looking to transform the UNSC into a place of high stakes geopolitical theatre, because China’s veto of the US resolution is inevitable.

The US therefore is using the internationally immaterial issue of Azhar in order to provoke tensions between China and India at a time when the ruling Bharatiya Janata Party (BJP) is already invoking blood-curdling Sinophobia in further attempts to rally the jingoist Hindutva vote.

But this is not all that the US is doing.

Washington is also provoking and in fact insulting Pakistan by suggesting that a local matter is worthy of wasting the UN’s time, even after one of the permanent members of the Security Council has made its position unambiguous.

As if on cue, India’s jingoistic media kicked into high gear suggesting war against China. Meanwhile, members of the BJP and the Rashtriya Swayamsevak Sangh (RSS) continue to call for a boycotting of Chinese goods. When it comes to Pakistan however, America’s willingness to inflate the international importance of Azhar makes it clear that the US is willing to risk productive relations with Pakistan in order to both placate India and to goad India into an even more extreme position vis-a-vis China (not that the BJP needs much help in this respect).

Although the US has admitted that Pakistan’s role in the Afghan peace process is crucial, beyond this, the US has clearly made its decision in terms of a long term strategy in South Asia. While some US diplomats will feign attempts at a balanced South Asia policy, the reality is that India is now a key US strategic partner. US diplomats at the UN will happily do India’s bidding, even over a matter as absurd as trying to convince the world that Azhar is an international terrorist when legal precedent says otherwise.

Pakistan must adjust its own expectations accordingly. While it would be imprudent for Pakistan to provoke any superpower, the message that Washington is not so subtly sending is that when it comes to a superpower partner, China is the singular key to Pakistan’s prosperous future, while the US is becoming little more than a puppet master helping direct flagrant Indian aggression against China.

This is all the more reason for Pakistan to take a more assertive role in the Afghan peace process. As the country most directly affected by Afghanistan’s prolonged status as a failed state, Pakistan has no excuse not to emerge as an international leader in driving forward an all-parties peace process. Any idea that Pakistan should merely shadow the US in respect of the peace process should now be put to rest, as it is clear that the US has India’s strategic desires at heart and that, by comparison, Pakistan’s security needs come a very distant second or even third.

The reality Pakistan must now face is that whilst America’s priorities in the South Asia during the 80’s related to containing Afghanistan to the West and the Soviet Union to the North, today the US is squarely focused on provoking China and for this, India will remain a key ally of Washington.

All that Pakistan must now do is acclimate itself to a new reality where China’s all-weather friendship will grow in stature and material importance while the US will be willing to insult, debase and ignore Pakistan as though the events of the 80’s never occurred.