When will people like Khateeb stop using a peaceful religion as a tool for violence? 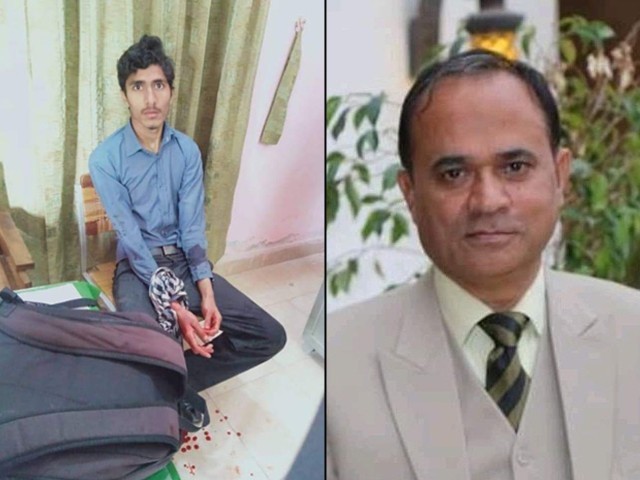 The teacher wanted to organise a welcome party which the said student considered ‘un-Islamic’ due to the intermingling of males and females.

A frightening incident recently took place in Bahawalpur in which a student fatally stabbed his teacher. The teacher wanted to organise a welcome party which the said student considered ‘un-Islamic’ due to the intermingling of males and females. In a chilling confessional video, the student alleged that the late professor used to ‘insult’ Islam on a regular basis. He showed absolutely no remorse for his action, and when asked as to why he didn’t take the legal route, his answer was that courts in Pakistan are freeing ‘blasphemers’.

A student of 5th semester at Govt Sadiq Egerton College in Bahawalpur who identifies himself as Khateeb Hussain when told the professor he attacked with a knife had died from his wounds says: Acha hua – also says “Bilkul mutmayeen hoon” pic.twitter.com/Jhn6nyr4HH

But perhaps even scarier were the comments that I saw on social media. Many were simply supporting the hideous act and endorsing the student’s justification of taking matters in his own hands. Instead of condemning the act, many were simply blaming Pakistan’s ‘broken’ judicial system, which supposedly had ‘forced’ the student to murder his professor.

If the truth is same as he claimed then salute to him..

The past few years have witnessed many such incidents, including high profile murders like Salmaan Taseer and Mashal Khan.

But why are such incidents occurring?

There has been a tendency to blame the infamous blasphemy law for these murders. There is absolutely no doubt that blasphemy law is often misused for settling personal rifts. However, I think that the situation has worsened way beyond the mere misuse of the law as many murders that have taken place don’t even involve the law. Legal recourse is simply not taken and a clear pattern, which is becoming evident, is that perpetrators are themselves deciding what constitutes as blasphemy and then acting as judge, jury and executioner.

In my opinion, there are several reasons behind such actions. First is the way we venerate religion and its associated symbols. More importantly, it is the way we expect any ‘violators’ of religion to be dealt with. Extremely powerful slogans like “hurmat-e-Rasool pe jaan bhee qurban hai” (for the honour of Prophet (PBUH), we are ready to give our life) actually expect that one should be prepared to even court death for the preservation of Prophet’s (PBUH) honour.

Second is the way we glorify past perpetrators of such murders. Every society has some heroes who are glorified so that others can emulate them. In a society like ours, unfortunately, some ‘heroes’ like Ghazi Ilmuddin are glorified and revered. Such reverence and adulation are dangerous because his main claim to fame was to murder a person who he thought had committed blasphemy. The kind of adulation he has received after death has created an incentive for many deeply devout Muslims to follow suit.

Mumtaz Qadri, when he committed the murder of Taseer, was perhaps also looking for the same kind of exaltation and legacy as that of Ilmuddin. Like Ilmuddin, Qadri also decided what constituted as blasphemy and then acted as an executioner. Unfortunately, the subsequent events have proven that he was not wrong in his calculations as his funeral was attended by millions and his shrine continues to attract hordes of disciples, including high profile politicians like Captain Safdar Awan and Fayyazul Hassan Chohan.

The young student who just murdered his professor has done the same, and unfortunately, some of the initial online reactions highlight that he too is being respected and adulated.

Third is the way the entire issue of blasphemy has been politicised in recent times by our mainstream parties, particularly Pakistan Muslim League-Nawaz (PML-N) and Pakistan Tehreek-e-Insaf (PTI). The latter tried to politicise a small change in oath-taking by claiming it to be an assault on the finality of Prophethood. In response, PML-N unleashed bigots like Awan who indulged in blatant anti-Ahmadi diatribe in the National Assembly. Imran Khan later attended the Khatam-e-Nabuwat Conference in which he openly alleged that PML-N had changed the oath in order to appease their international masters. On the other hand, PML-N leaders like Shehbaz Sharif courted hardline clerks like Pir Sialvi to gain support.

The entire General Election 2018 in Punjab was fought on the religious turf and both parties tried to outdo each other. The situation at one point worsened so much that Ahsan Iqbal barely survived an assassination attempt. In addition, newly formed parties like Tehreek-e-Labbaik Pakistan (TLP) also intensified the rhetoric. Subsequently, TLP also indulged in outright vandalism when Aasia Bibi was released, once again projecting the issue to centre stage. All such political tactics have resulted in a situation that blasphemy, real or perceived, has become an important issue, encouraging people to ‘do’ something about it.

For years, I have heard the nonsensical claim that since Pakistanis don’t vote for religious parties, therefore they are ‘moderate’. The way our political landscape has evolved, it has forced literally all the parties to move more towards the religious right. Religious parties don’t get votes mainly because they don’t have much to sell as religion is not their exclusive domain.

If we want to prevent such incidents from happening, the task in front of us is long. As I discussed above, blasphemy law alone is not the problem. We need to start by putting a stop to the glorification of violence in the name of religion and cease veneration of those who have committed such violence. We need to redefine what constitutes as disrespect of Islam and Prophet (PBUH). In my mind, those who commit violence in their name are being disrespectful as they are projecting a very negative image of an otherwise very peaceful religion. Perhaps this is the way to define disrespect.

Our political parties also need to stop whipping religious sensitivities for petty gains. The onus here is on mainstream parties like PML-N and PTI. If we don’t stop such politicisation, extremism will only continue to seep into the social fabric of Pakistan, wreaking havoc in the long-run.