When Mashal Khan fell victim to our criminal mind-set 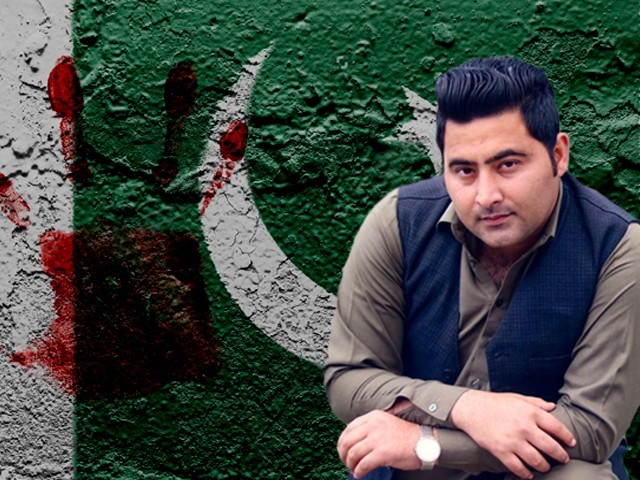 What happened yesterday to Mashal Khan at Abdul Wali Khan University in Mardan is not something new.

Yesterday, I received the news through a WhatsApp message wherein my younger brother sent me a video clip and requested me to watch it. Although the video was brief, about 45 seconds, but it was long enough to make me sick to my stomach. What I was seeing was barbarism at its worst – a large crowd beating an already dead man. Many were silently watching and no one was even trying to stop it. That video, along with many others, has gone viral. At a time when the global opinion about Muslims and Pakistan is already worsening, this occurrence has merely aggravated the problem.

And yet, despite the extremity of the incident, I was not surprised. What happened yesterday to Mashal Khan at Abdul Wali Khan University in Mardan is not something new.

My mind flashed back to an incident which had occurred during my teen years and had shaken me to the core. It was a case which, along with Salamat Masih’s case, played an instrumental role in transforming me as an individual.  It was the case of Hafiz Sajjad, who was burnt alive by a mob in Gujranwala for allegedly desecrating the Holy Quran. According to the details in the newspaper which I was reading at that time, Sajjad had allegedly burnt pages of the Holy Quran and as soon as the nearby cleric got the whiff of it, he issued a fatwa. Resultantly, a mob had gathered outside his residence, dragged the individual out of his home and started beating him. As they were thrashing him, someone in the mob stopped the others and suggested that the culprit should be meted out proper Islamic punishment of stoning. At that point, the police reached the spot and took the individual into what under normal circumstances would have been a protective custody.

But soon an even larger crowd had gathered in front of the police station and started to demand that Sajjad be handed over to them. Due to the huge size of the increasingly vociferous mob, the police inspector buckled under pressure and handed Sajjad over to the mob who started stoning him mercilessly and thereafter set his body on fire. If this were not enough, they tied his corpse to a motorcycle and dragged it through the streets for two hours.

However, two days after the incident, details of the case were revealed which established beyond doubt that Sajjad had in fact been a traditional devout Muslim and had accidently dropped the Holy Quran on the stove while reciting it. Although it was a genuine accident, someone from the neighbourhood reported his action to the nearby mosque as a deliberate act. Needless to say, the cleric did not even bother to ascertain the facts before agitating the nearby community to take action. This agitation “convinced” people to do what they did. Although the incident was shocking, the reaction to all that barbarism was even more tragic. There was hardly any agitation or debate and no political party even raised the issue.

The said incident has been followed by a flurry of such incidents of religion inspired mob violence. In 2009, there was a similar incident of mob violence against Christians in Gojra. In 2013, a Christian colony in Lahore was attacked. A Christian couple was burnt alive in 2014. In 2016, Ahmadi places of worship in Chakwal were attacked. Hence, what has happened in Mardan is only the latest in a series of such incidents.

Although specific details of each incident vary, there are nevertheless several things common. All of the aforementioned incidents, along with countless others not mentioned here, demonstrate a variety of elements – use of religion in perpetuating violence, venting out of core violent instincts, complete inability of anyone near the mob to even raise a dissenting opinion, impotence of the state apparatus to give protection at the time violence was taking place, and lastly but perhaps most importantly, the reluctance of political parties to stir any debate on the failure of our administration to give protection and on the controversial blasphemy laws in Pakistan.

The last element shows that the issue perhaps does not register as an issue with the populace. After all, by design, political parties try to stir debate on issues where there is some political meat which in turn emanates if there is some genuine concern for it in the public.

One can claim that these incidents are still occasional and therefore do not represent the so-called “moderate” majority. However, I beg to disagree. The majority may not be physically participating in such violence, but it holds views which are conducive to such violence. Many of us are willing to believe in the accusation of blasphemy even without any proof and often demand “maximum” punishment for the accused.

A few months ago, when the five bloggers were abducted, a malicious campaign was waged against them on electronic and social media, accusing them of blasphemy. Some TV anchors were openly demanding their death, a view endorsed by a large number of Pakistanis on social media. Since I knew Salman Haider through Facebook, I therefore decided to write an article defending him. I was aware that Haider was a devout Muslim and there was no way he could be a blasphemer. I still remember the response to the article on the Facebook page of The Express Tribune. An overwhelming majority of commentators was simply insistent on calling him a “blasphemer” despite the fact that no proof had ever been presented against him. Based on their perception, many of the commentators wanted him to die. Some even said that I should be abducted or killed just for writing an article defending him.

The entire abduction episode gives us a good and clear idea of the collective mind-set of our society. It is this very mind-set which lowers the threshold of mob violence whenever an accusation of blasphemy is made.

But what is the cause behind it? I think the general diagnosis of some liberals that the root cause is Pakistan’s blasphemy laws is somewhat misplaced. In my opinion, the blasphemy laws are only a symptom. Yes these should be amended but we need to address the real problem.

In fact, in blasphemy cases, people have even been killed while in jail while their cases were in progress. Repealing the laws, if such repeal is even successful, will only remove a symbol of the religion’s infusion with the state; it will by no stretch of imagination prevent people from endorsing or instigating violence. In this matter, repealing the laws without addressing the real issue will cause people to become even more bigoted than they are now. In fact, the law cannot be repealed through democratic ways in the first place until the major issue is tackled.

Let’s not forget that laws, even if imposed through dictatorial ordinances, can only be repealed through legislature. No party has the guts to do it and one of the main reasons is that unfortunately, most of the ordinary Pakistanis want these laws in place. These laws are the reflection of Pakistan’s general populace, and assuming that a sizable number even supports the notion that these laws should be amended, they are completely impotent due to extreme reverence of religion and their inability to bring any counter argument to conservative religious scholars and clerics.

In my opinion, it is our cultural setup which is the main reason. This system gives religion extreme reverence and cultivates an identity based on it, which is extraordinarily sensitive on all religious matters. This reverence of religion is primarily cultural through the state as its major patron. The issue is not restricted to the fusion of religion with the state; the state is one of the patrons of religion, but is not the sole determinant of its reverence.

All of this cultivates an atmosphere where a mob can actually get away with extremely violent acts in the name of religion. People, even if they do not actually feel the anger, can still get violent to vent out their instincts under the guise of religious sensitivity, knowing fully well that no one will be able to stop them. In fact, we know of several instances where the police and respective administrations were merely silent spectators while the mob was imposing their “justice” on the victims.

Can we change it? Yes, it is an extremely tall task but something we need to start. We have to first control the hate speech on electronic media and also present a counter narrative to violence in the name of religion. Only by coming up with an effective counter narrative can we tackle the issue. Most importantly, we need to make ourselves understand that when we kill, endorse violence or even express excessive outrage, we are portraying the legacy of our Prophet (pbuh) in a wrong manner.

Somewhere between the labels of “Tum Kaafir, mein musalmaan” (You’re a disbeliever, I’m a true Muslim), some people lost a son, a brother and a friend.

Acting violently, endorsing violence or even tolerating it, and then expecting the world to consider our religion as peaceful is not going to happen until the narrative changes.