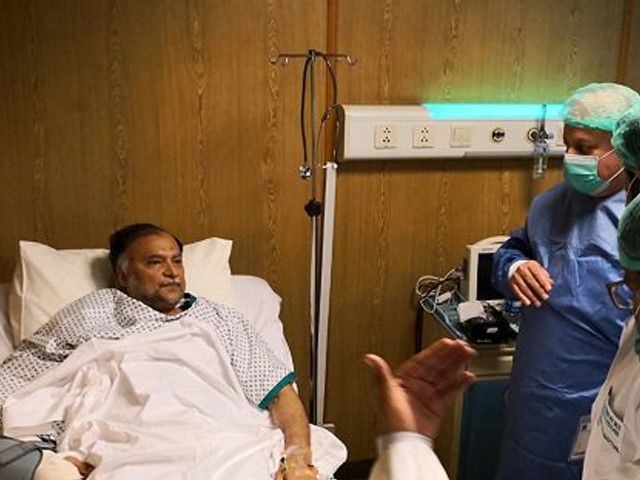 As I write this, the country is still reeling from the shock of an assassination attempt on Interior Minister Ahsan Iqbal. I am grateful that the minister has survived and is on his way to recovery. The accused attacker, who has been caught, claims to have attempted this assassination on the pretext of protecting “Khatm-e-Nabuwat” (finality of Prophethood).

Considering the fact that Ahsan himself is a religious and a very decent person, this is an extremely dangerous development. It shows that now, literally, anyone could be a target, if some fanatic believes that he or she has violated the sanctity of the finality of Prophethood.

Needless to say, it has literally become a subjective and highly individualistic notion, as to what constitutes as blasphemy. Seven years ago, when Salman Taseer was martyred, the murderer had simply assumed that criticising the controversial law was reason enough to consider Taseer a blasphemer, and then acted on his own impulse to punish him.

This time, the alleged attacker has simply used the controversy surrounding the amendment in oath-taking, which was in fact subsequently retracted, to punish the minister. In between the time period of Taseer’s murder and the attack on Iqbal, Pakistan has witnessed the murder of Shahbaz Bhatti and mob style murders of several individuals, including Mashal Khan. There has been an increase in the number of complaints filed under blasphemy law, and above all, there is continuous politicisation of the finality of Prophethood by all important stakeholders.

The last development, which has been gathering pace rapidly since 2017, is the most dangerous and if it is not kept under check, it would lead Pakistan to complete mayhem. Unfortunately, the way things are shaping up, I don’t see any stakeholders even interested in stopping this trajectory, in fact all of them are using it to claim a political advantage over the other.

Political use of sensitive matters like the finality of Prophethood has always been around but has gathered unprecedented steam since last year. We have to just take a look at the chronology of the events in the last one year to understand the gravity of the situation:

1. In November 2016, some quarters ran a malicious campaign to create controversy about the appointment of General Qamar Javed Bajwa as the Chief of Army Staff (COAS). Sajid Mir, a Senator from Pakistan Muslim League-Nawaz (PML-N) was one of the leaders of this campaign.

2. In January 2017, few bloggers were kidnapped and a vicious campaign against them started on electronic media, accusing them of blasphemy. This campaign elevated the issue of Namoos-e-Risalat (respect of Prophethood) to the centre stage.

3. In March 2017, an analyst accused then Prime Minister Nawaz Sharif of committing blasphemy against Islam, after the latter had attended a Holi ceremony in Karachi.

4. In early October 2017, a new controversy arose when the PML-N government changed the words of the oath-taking by replacing the phrase “I solemnly swear” with “I believe”. This change was politicised by the opposition who accused the government of “compromising” on the finality of Prophethood. Under pressure, the government later restored oath-taking to its original form.

5. On October 10, 2017, Captain (retired) Muhammad Safdar Awan from PML-N made a highly controversial and inflammatory speech targeting the Ahmadi community.

6. In November 2017, the Faizabad dharna led by Tehreek-e-Labaik Pakistan (TLP) took place which demanded the resignation of Law Minister Zahid Hamid and called for punishment of those who were allegedly behind the change in oath-taking. On November 25, 2017, after three weeks of sit-in, the government tried to disperse the protesters but could not do so effectively. Next day, the government capitulated, and Hamid had to resign. This abject surrender was one of the lowest points amongst the series of events pertaining to this issue.

7. In December 2017, spiritual leader Pir Hameeduddin Sialvi demanded the resignation of Rana Sanaullah due to the latter’s supposedly pro Ahmadi remarks. He also threatened violence if PML-N’s leadership tried to play with the emotions of Muslims.

8. In January 2018, PTI’s Jehangir Tareen met Sialvi and offered complete support of the party. Following his meeting, Shehbaz Sharif also met the spiritual leader to pacify him, after which the latter retracted his strict demands. As a result of the meeting, a committee was formed to investigate Sanaullah’s remarks.

9. On February 22, 2018, Pakistan Tehreek-e-Insaf’s (PTI) Chairman Imran Khan attended the Khatm-e-Nabuwat conference and gave a speech in which he alleged that oath-taking was deliberately changed by the government to please a foreign lobby. Considering the fact that Imran is supposedly a prime minister in waiting, this was one of the most significant attempts to politicise the entire issue.

10. In April 2018, TLP organised another sit-in, this time in Lahore, to demand implementation of the Islamabad agreement. Unfortunately, this time too, the government accepted all the demands, thus further endorsing such forms of tactics.

11. In April 2018, at Lahore’s PTI election rally, Sheikh Rasheed once again raised the issue of Khatm-e-Nabuwat.

The above chronology of events shows a pattern. The governing party is constantly being pressured on this issue and it responds by either caving in or unleashing bigots like Awan. On the other hand, opposition and certain TV anchors are continuously whipping the issue which is merely increasing its significance in the political arena.

Given the above scenario, the attack on Iqbal is hardly a surprise. In fact, I fear as we are slowly approaching the elections, both government and opposition are going to play on this turf. Apart from increasing the likelihood of such attacks, this will further endanger the already vulnerable Ahmadi community.

All the political stakeholders need to understand that this needs to stop, otherwise the existing fissures will worsen and the social fabric of this country will be completely destroyed.

It is time that we learn something from history.