Mumtaz Qadri: From Ghazi to Shaheed 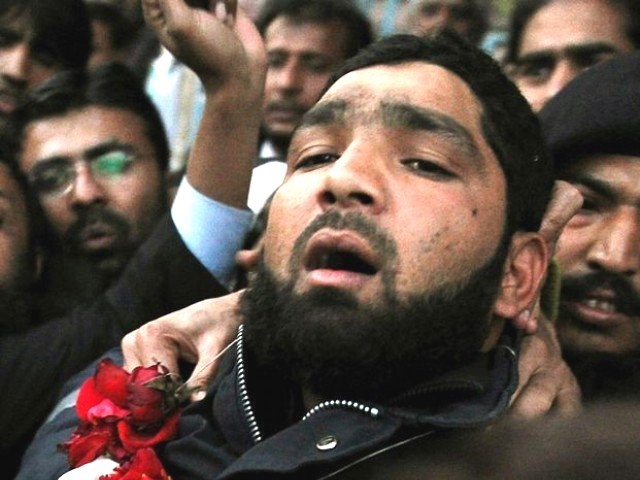 The poster boy for the arbitrary use of blasphemy laws has been hanged. PHOTO: AFP

The poster boy for the arbitrary use of blasphemy laws has been hanged. His supporters have carried out various protests all across Pakistan. Members of the Islamabad Bar Association called his hanging a judicial murder and observed a “black day”. Tens of thousands gathered for his funeral. Many of them turned violent and attacked journalists and reporters even breaking their equipment. Some self-professed clerics cornered up and verbally abused Information Minister Pervez Rashid at Karachi airport. The government responded by not allowing any in depth coverage of these incidents and asked anchors to keep a lid on it.

But does keeping the lid on things help Pakistan change? Our biggest fear was not if Mumtaz Qadri would be hanged or not but if we will be able stop another Mumtaz Qadri from becoming ‘Ghazi’. So have we created the required deterrence with this hanging? Who was till yesterday celebrated as a Ghazi is now being observed as a ‘Shaheed’. So where do we go from here and how do we respond to the fear which remains?

Malik Mumtaz Hussain Qadri joined the Punjab Police Service in 2002 before becoming and elite commando in 2007. This resident of Pindi was the son of a vegetable seller. Little is known about his educational background. He was 26-years of age and had been married for only 16 months and perhaps looking to build a family life before he shot Salman Taseer in cold blood and smiled with content while he was arrested.

Overnight, an unknown man who stood guard behind VIPs jumping on and off motorcades to provide protocol became a household name. He was glorified with much more thump than he was vilified. His actions were validated more openly than they were condemned. Politicians revered him, lawyers wanted to represent him and police wanted to serve him as Mumtaz Qadri wore the crown of ‘Ghazi’.

We ignored rallies, speeches, sermons and campaigns in his honour and favour for five years. We allowed his influence to grow day after day. And we think we will able to handle the situation by asking media to now put a lid on it.

If the lid had to be put then it had to be put on the sermons of Hanif Qureshi who according to Mumtaz Qadri’s confession inspired him. His one hour 41 minute video is available on Youtube in which he encourages the gathering to riddle Salman Taseer’s body with bullets. In which he pushes the gathering to commit the crime by repeatedly saying the law doesn’t apply to us. In which he says that though they are not like Taliban who attack army and police personnel but they are no less violent when they feel offended.

Hanif Qureshi was granted bail back in 2011 and little has is known about the case which was registered against him in relation to Salman Taseer’s murder. What I do know is that I have seen him sit as a religious expert on almost every single big media channel where he has been acknowledged as a religious authority and he has been allowed to increase his influence over the past five years.

How do we expect to deter another commoner from becoming ‘Ghazi’ if we are not going to stop their brainwashing, their training and manipulation at the ends of imposters like Hanif Qureshi who cowardly never volunteered to be tried along with Mumtaz Qadri, who was happy to make Mumtaz Qadri the poster boy and sole target of opposition so he could escape blame as he seems to have successfully done so.

The effects of Hanif Qureshi’s teachings and growing influence are glaring us in the face. It takes a special kind of impudence and utter disregard for law to physically assault a sitting minister at one of the most secured premises like Karachi Airport within the presence of armed police guards, Airport Security Force and military officers.

So the next big question which Pakistan faces including the government, the army, the media, the judiciary and the people is, are we going to keep ignoring the masterminds who lead the narrative of intolerance? Will we simply keep finding content and evidencing rule of law by hanging foot soldiers?

Foot soldiers that perhaps in another life would have like to live as law abiding citizens, raise kids, build a home and play their part in the development of the country.

If we are to change the narrative, if we are to lead the fight back and if we are to spread the ideology of peace, tolerance and rule of law then we also need to show unity between our ranks.

I must admit that the special impudence of the radicals was met by a special kind of courage, resolve and grace by Pervez Rashid who remained calm and kept walking forward. But why does he appear to be bearing the brunt alone?

At this time my concern is not only that will Pakistan Tehreek-e-Insaaf (PTI), Pakistan Peoples Party (PPP), Muttahida Qaumi Movement (MQM) and Awami National Party (ANP) stand with Pakistan Muslim League- Nawaz (PML-N) or not, but also that will the likes of Pervez Rashid find support within his own party or not.

The PML-N leadership has stuck its neck out by annoying within the same week self-professed clergymen from both Deoband and Barelvi schools of thought with first passing the Women’s Protection Bill in Punjab and then carrying out Qadri’s death sentence. The party now faces a divide within its own ranks.

On one end, it has members like Pervez Rashid risking their lives at the hands of another Qadri wannabe. On the other hand, it had members like MNA Capt Safdar who is not only the son-in-law of the Prime Minister of Pakistan, but also heads the Youth Wing of PML-N. It was only a few months ago that a video of him fiercely defending acts of Mumtaz Qadri in a mosque surfaced on social media. PML-N also has members like Pir Aminullah Hasanat Shah who in his capacity as the Minister of State for religious affairs has confirmed that ‘Ghazi’ is now a ‘Shaheed’.

This struggle is not and cannot be only the concern of one Taseer Family and its friends or one political party like PML-N. Progressive mind who believe in a tolerant and peaceful Pakistan will need to rise above vested interests. We need to think above any party lines, any media house dictates, any university code of conduct, any company’s corporate policy and any social norm which demands us to remain silent and ignore.

We must create awareness about the misuse of blasphemy laws and we must address the misrepresentations made by Islamic traditions on the issue of blasphemy. We need to support members from within the clergy for speak and support reform. Change does not only need will, it also needs a consistent push forward and the push has to come from all quarters. The Supreme Court has already hinted that it is willing to hear a petition for reforms by saying, criticising blasphemy law is not blasphemy. But the reform remains the primary domain of the National Assembly. We need to decide now on which course we want to put Pakistan on for future generations.

If we do not speak and act to stop the common man from becoming a criminal, we will continue to see ‘Ghazis’ turn into ‘Shaheeds’.