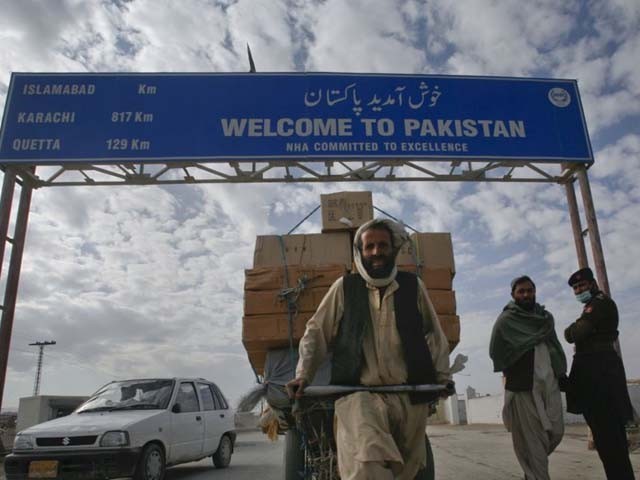 A Pakhtun man passes a road sign while pulling supplies toward the Pakistan-Afghanistan border crossing in Chaman. PHOTO: REUTERS

Prime Minister Imran Khan’s ‘Naya Pakistan’ just passed legislation loosening the country’s previously difficult visa procedure. This legislation allows most of the world’s nationalities to either receive a visa on arrival or electronically, which will not only boost tourism and facilitate business dealings, but also show the international community that Azad Kashmir is truly free and not ‘Pakistan-occupied’ as India falsely alleges.

This is all part of Imran’s ‘Naya Pakistan’ vision of revolutionising his country’s domestic and foreign affairs. This legislation is expected to immensely boost Pakistan’s tourism industry and facilitate the clinching of international business deals along the China-Pakistan Economic Corridor (CPEC).

The future influx of tourists to Pakistan’s world-renowned mountains and beaches will help to dispel the country’s negative reputation that was manipulatively cultivated by the United States (US) and India as part of their years-long infowar against the country. This will powerfully prove that Pakistan has been deliberately misportrayed this entire time and prompt people to question what else the western mainstream media has been lying about when it comes to the South Asian state.

As far as the business angle of this decision is concerned, Pakistan can greatly speed up the time that it takes for it to actualise its geopolitical destiny as the ‘zipper of Eurasia’ in utilising CPEC as a platform for super-continental integration. This can ultimately culminate in Pakistan becoming the  ‘convergence of civilisations’ by bringing together the diverse interests of China, Central Asia, Russia, Turkey, Iran, the Arabs, and Africa and directly counteracting the US’ ‘clash of civilisations’ stratagem.

The most immediate impact of PM Imran’s move, however, is that people will be able to see that Azad Kashmir is truly free and not ‘Pakistan-occupied’ like India falsely alleges. This can in turn help Pakistan contradict one of the most malicious myths spread about it since independence. The rest of the world will now be able to see with their own eyes that the population there doesn’t behave like their counterparts across the Line of Control.

The part of Kashmir under India’s control can legitimately be described as Indian-occupied because of how much the population is fiercely resisting New Delhi’s ‘authority’ in response to the rampant abuses that the state regularly carries out against them. This abuse actually goes to great lengths. New Delhi, in an attempt to suppress the voices of the Kashmiris, often shuts down the internet and assassinates activists in cold blood. There have been equally extreme cases of foreigners (especially journalists) being barred from the region for ‘security purposes’.

Altogether, the grand strategic impact of ‘Naya Pakistan’s’ visa liberalisation law is that the country is confidently opening up to the outside world in order to bring regular folks, business people, and ultimately even entire civilisations together on its territory. This will showcase its recent socio-economic and security successes while simultaneously having a powerful effect in reshaping international perceptions, especially when it comes to Kashmir because of how much Pakistan’s transparency contrasts with India’s secrecy.