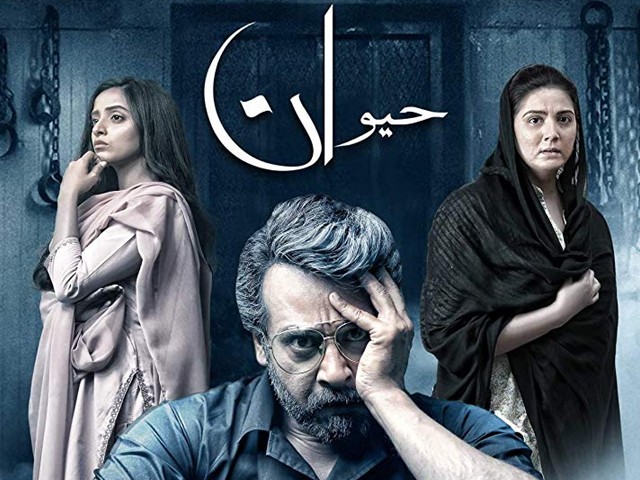 The story revolved around the sexual abuse and murder of a little girl called Masooma. PHOTO: IMDB

While highlighting social taboos and evils through local dramas is a bold initiative that our entertainment industry has been taking for around two years now, it doesn’t always hit the mark. At times, our serials normalise things that ought not to be, sometimes in the wake of ratings and sometimes because the makers want to portray situations as close to reality as possible.

Recently, the much-hyped drama serial Haiwan, that kicked off the trend of #MyChildMyResponsibility on social media, concluded on a deeply unsatisfactory note. A drama that was meant to give a strong message of protecting children from the predators that lurk in ordinary and familiar faces ended very ineffectively and disappointed viewers to say the least.

The story revolved around the sexual abuse and murder of a little girl named Masooma. The heinous crime was shown to be committed by Hameed (Faysal Qureshi), the father of the victim’s best friend Jojo, who also lived next door.

Hameed is shown to be a respected and charitable individual who had committed the ‘sin’ or ‘mistake’ under the influence of alcohol. Apart from indicators showing his unstable mental state, nothing else is revealed about his background and there is no backstory to comprehend why he would not only rape but also murder a child. The writer does not even show any details about Hameed’s possible mental illness. As a viewer, all you see is that a mentally disturbed man raped and murdered a 10-year-old because he was probably not in his senses. That’s how easy it is to pass away child rape and murder for our show creators.

It was, however, the last episode that was the biggest disappointment and completely destroyed the essence of the drama. Firstly, no legal action is taken against Hameed for his paedophilic ways. He is handed over to the police by his family, but sometime later the police call his son and reveal that medical reports proved Hameed to be mentally unstable and hence the court released him. Hameed then spends his time at a shrine in a state of unrest, begging Allah to forgive him for his sin. Then one day he comes across Masooma’s mother and falls at her feet to beg for forgiveness. The victim’s mother later sees her deceased daughter at the same shrine waving happily at her, and it seems she forgives Hameed.

Although the ending is heart-wrenching and triggers all possible emotions within the audience, it was not right at all. Yes, the unfortunate reality remains that in most such cases in Pakistan, parents end up forgiving abusers and murderers (perhaps due to honour or security issues caused by social class differentials). However, there is no point in airing a show specifically written to create awareness on this issue if the message it sends is to forgive your child’s abuser and murderer if he feels guilty and seeks repentance for his crime.

Hameed should have been prosecuted in any case and either kept imprisoned or sent to the gallows, the way we saw done to Dabeer, who was the paedophile in the popular show Meri Guriya. In Meri Guriya, which focuses on a similar issue, while Dabeer’s mother repeatedly sought mercy from the victim’s mother, there was no forgiveness from her end. Instead, she remained determined to make Dabeer’s fate a lesson for all those who could even think of committing such a crime. Dabeer was thus hanged to death in a public square and punished by law, bringing the drama to a very meaningful and educating conclusion.

Alternatively, the makers of Haiwan could have also presented a sound story to prove Hameed’s mental illness right from the beginning; something to really make the audience believe that Hameed was actually mentally unsound. Even something along the lines of Hameed having been abused as a child might have given the audience some insight into his character without justifying his crime. Presenting child rape and murder committed as just another sin in the heat of the moment makes it seem justified as a trivial offence, such as lying or breaking someone’s heart.

The medium of TV dramas is the best way to educate the masses in Pakistan, and in this endeavour, the team of Haiwan failed. They did not send the strong message they were capable of sending through a meaningful conclusion to the story; a conclusion we could have learned from, the way we did when Meri Guriya ended. Rather, dramas like Haiwan end up underplaying horrific crimes such as rape and child abuse that remain rampant in our society by showing no accountability for the crime committed.

This is not even the first time our dramas have portrayed child abuse and rape in a problematic manner. In 2017’s Muqabil, child abuse survivor Parisa (Kubra Khan) was shown to marry Armaan, the son of her rapist, in order to punish him. The rapist was the driver at their house who raped Parisa when she was 10-years-old, and for some reason, Parisa is shown choosing to live in the same house as her rapist and his son. Anyone can tell that in normal circumstances, survivors of child abuse would find it immensely difficult to face their abuser again, let alone marrying their children so they could live in the same house. The same show portrays the rapist as a decent individual who made this one mistake of raping a child and then proceeded to regret it his entire life. How is this different from making fun of the pain victims of abuse go through?

We really need to stop glorifying abusers and presenting them as otherwise decent individuals when they are not raping and killing children. Yes, it is very important to highlight the issues present in our society, but it is equally important to not make it socially acceptable to simply forgive abusers and child murderers for the crimes they commit.

Over the past several years, the topic of child molestation and sexual abuse has become a favourite for local drama creators, but increasingly it feels like this is being done to sensationalise the issue, and in turn earn ratings. Udaari, Muqabil, Dar Si Jaati Hai Sila, Meri Guriya and Haiwan are a handful of dramas on this topic that come to mind immediately. There were many others that were perhaps less memorable. Highlighting social taboos such as these is a great step, but is now becoming redundant, as it distracts viewers from an actual message.

If the industry wishes to take up this important topic, then it must realise its responsibility to do a better job. If not, then I believe it’s high time we dig deeper and extract other taboos and social evils to refresh our redundant storylines and educate the masses on important issues such as child labour, cyber bullying, single parenting and women empowerment. Hopefully they will do a better job with a different topic.