To solve the economic crisis, PTI will have to move beyond optics and IK’s persona 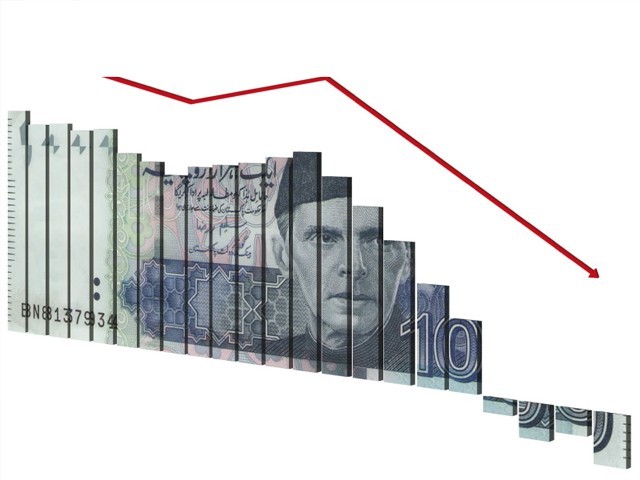 The sudden drop in our currency was not a surprise. DESIGN: JAMAL KHURSHID

The Pakistani rupee plunged against the US dollar yet again last week, this time by almost Rs10. The sudden fall of the rupee, which traded for around Rs140 against the dollar, gave birth to speculation and as a result also led to the stock exchange witnessing a sharp decline in index points. On Monday, the Karachi Stock Exchange saw another bloodbath as it lost 1,355 points.

The premier’s statement regarding the possibility of early elections and the forecast by the State Bank of Pakistan that 2019 will slow economic growth from the projected 5% to 4% played a crucial role in the stock exchange crash. But what was perhaps more surprising was Prime Minister Imran Khan’s claim that neither he nor his finance minister were aware of the devaluation of the currency and only came to know of it when the news broke on TV.

One wonders how the premier can claim to govern the country and how on earth investors are supposed to trust an economy where the leaders claim to not be informed before important decisions that impact our economy are taken. A prime minister unaware of the financial crisis and a finance minister whose sole strategy to avert the current crisis remains criticising the former government only send the message to the local and international business community that the current government is non-serious and inept when it comes to dealing with the crisis at hand.

After all, the continuous devaluation of the rupee and the frequent stock exchange crashes are not a joke; these result in losses worth billions of rupees for investors and the business community at large, and yet our premier casually informed the nation he remains unaware when such integral steps are taken.

Ever since the Pakistan Tehreek-e-Insaf (PTI) assumed power, it has faced the daunting task of decreasing the current account deficit. Adding to their worry is the balance of payments crisis, while the trade deficit per month stands at around $2.93 billion. The $1 billion of cash flow from Saudi Arabia has not proven sufficient in fixing the current account deficit problem. The government is facing another challenge in the form of repaying external debt servicing as well.

This means that whenever one rupee is devalued against the US dollar, it causes billions of rupees to rise in our actual debt amount. Devaluation also leaves a devastating impact on the production sector, and as a result the production costs of imported items rise, leading to price hikes overall and inflation. The rupee has been devalued around 10 to 12% during the first 100 days of the PTI government, and many analysts believe it will further devalue in the future. This will leave the PTI government no option but to seek more loans from friendly countries, even after seeking a bailout from the IMF.

The sudden drop in our currency was not a surprise. Pakistan’s currency was overvalued, and the former Pakistan Muslim League-Nawaz (PML-N) government kept it overvalued by pumping dollars into the market through loans and investments. However, PML-N was not able to address the root cause of our economic woes, and it seems that PTI too has no answer.

Finance Minister Asad Umar is also hoping the IMF bailout package will shrink the current account deficit and will thwart a potential financial breakdown for the time being. What PTI and Umar need to understand is that by no means will an IMF bailout or loans from China and Saudi Arabia avert the financial crisis in the long run. In a press conference, Umar rightly pointed out that the PML-N government artificially controlled the dollar rate against the rupee, but he conveniently did not mention that at the same time the PML-N was also able to bring in investments in the power and energy sectors in order to be able to do so. He also did not get into the absence of a Standing Committee of Finance in the National Assembly, which only results in the inexperienced PTI staying deprived of consultation and advice from members of the opposition.

Had there been a Standing Committee, it could have advised the PTI to not to devalue the currency in a hurry, only to create panic in the market and amongst investors. We saw the chaos when the rupee fell and the stock market crashed. After all, a stable currency is the sign of a healthy and progressing economy that attracts investment, while a currency losing its value so abruptly causes overall concern.

According to David Malpass, US Undersecretary of the Treasury for International Affairs, the PTI government needs a strategy different from that of its predecessors. Its failure and the current uncertainty are not stemming from its indecision over IMF, but from the lack of a stabilisation strategy once the 100-day period was over.

Malpass has hit the nail on the head. No one can accuse the PTI of causing the currency crisis or the growing economic woes, but instead of tackling them by devising a new policy to actually address structural problems, PTI has been wasting everyone’s time through optics. From the austerity drive to claims of getting billions of dollars from friendly states, we have only seen optics from the sitting government to somehow offer a feel-good ‘victory’ to its support base.

However, optics will not help the PTI avert the economic crisis, and if it continues to devalue currency without taking investors and the concerned quarters into confidence, the PTI will never fulfil Imran’s vision to rely on investments instead of carrying a begging bowl. The recent rupee plunge should raise alarm bells for the PTI that they are losing the plot, as its finance wizards continue to waste time by repeating the policies of former governments. Soon we could be facing a financial crisis that will not be averted by loans and grants alone.

However, on the day of the stock market crash, instead of addressing the issue and giving confidence to investors, Imran chose to give an interview to his favourite journalists and revealed that early elections are a possibility.

These statements clearly show the PTI does not understand the impact the statements of a leader can have at a time when the country is facing financial turmoil and its masses are feeling increasingly helpless. Such statements and ineptitude on the government’s part will only signal that investors and businesses should stay away until there is some stability in Pakistan’s current situation. Foreign remittances are one way to stabilise the currency and to address our economic woes in the long run, but in the absence of any visible financial policy to address this issue, the PTI will not be able to impress any investors on the basis of optics or the persona of Imran alone.