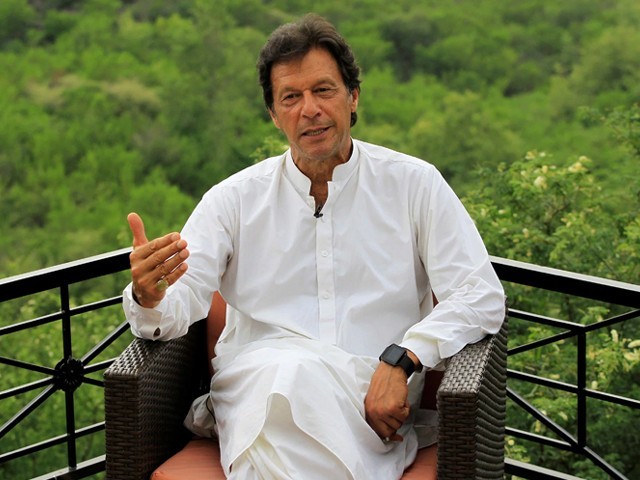 I recently met Prime Minister Imran Khan at his house in Bani Gala with a group of colleagues.

So much has changed.

The prime minister is fond of such meetings with groups of journalists at his private residence. But it’s different now.

Elaborate official arrangements, professional security detail, a great team of time managers from the Prime Minister House, and a stern bodyguard standing behind him at all times, including when he was sitting in the close-door huddle with us.

But he has not changed. Nothing noticeable. No aura of officialdom and power (except maybe for the poker-faced guy standing alert behind him).

Imran is overwhelmed by the problems facing Pakistan. He and his team are in power for the first time. They’re learning on the job, the nation’s expectations are high, and the losers  – the tried, tested and failed politicians who became rich during public service  – are colluding with media owners and journalists to confuse and detract.

The Baji of Raiwind* (famous for reportedly running the Aunty Media Cell**) is allegedly spending a fortune on creating distractions for Imran’s government. She commands an army of political touts whose job is to clutter the media with nonsensical issues and statements. Her social media team is busy producing fake posts and videos.

As if this was not enough, previous governments of Pakistan Peoples Party (PPP) and Pakistan Muslim League-Nawaz (PML-N) have left Pakistan in a spectacular economic mess. More public debt in the past 10 years than in the 70 years since Independence. Even if Imran wants to fix it, it will take time, and he has no immediate options except more borrowing (preferably from allies like Saudi Arabia, UAE and China, and not the International Monetary Fund).

At one point, he became emotional.

“I can’t call them politicians. They are not politicians, they are criminals, how they piled up debt on Pakistan. How could they do it?” he said, moving his hands animatedly, referring to the PML-N and PPP governments since 1991.

The two parties have been rotating power, barring the stint of Pervez Musharraf’s administration.

Since he and many in his government are first-timers in the power corridors, the Pakistan Tehreek-e-Insaf (PTI) government is prone to mistakes. And it did commit some big ones in the first few days after assuming office. Luckily, the government has an amazing media manager, Information Minister Fawad Chaudhry, who is giving a tough time to the multi-pronged attacks by the opposition. But he is alone, looking after too many things as he faces off with the many tentacles of the Aunty Media Cell. There are the talk shows, news bulletins, editors, TV channels, media owners, lobbies, political parties, and the Parliament itself. At times, the PTI appears overwhelmed. But the prime minister, his information minister, and a handful of spokespeople are successfully holding the fort – for now.

But this is not enough over the long run. The Raiwind cell and allied parties are exploiting the first two months of the new government to spread despondency and chaos. It’s calculated, lethal and effective. They all are veterans and know how to do it. Imran and his team are novices, though no easy target.

The prime minister is alert to the conspiracies.

“We have to be clear on this: they want to create issues for us. But we will not be deterred. We are moving forward,” he said, when told how his detractors are working.

He explained how his government is facing tiers and tiers of government employees and bureaucrats with loyalties to ‘Old Pakistan’ politicians.

He is right. The two largest parties have planted their loyalists in all important government departments. They are civil servants, and the prime minister cannot get rid of them easily. If he brings in professional outsiders to run the show, the bureaucracy will resist. He knows this is not an option.

“There are good people in the system, we just need time to identify them and bring them up,” he said.

Tough call, but doable if done methodically. Imran is talking about changing 40 years of a political culture where parties and politicians infested the government with inept loyalists who have almost paralysed the state and led to a collapse in services.

But it is not just the bureaucracy. While he and his government are busy planning for the future, disgraced former premier Nawaz Sharif’s daughter and family are busy spreading despondency and disinformation among Pakistanis. The Sharifs have allies among other parties that are indignant at Imran’s election sweep. Television news channels are influential in shaping the narrative in Pakistan, where news is the only entertainment in a country deficient in theatres, clubs and sports.

This is why media owners are very important. Most of them are not journalists, but businessmen with little respect for journalism. They have been taking in lucrative advertisement money from the Sharif government, while denying salaries to working journalists. And many of them are accomplices in the opposition’s game of keeping focus on destabilising the new government. For some of these media owners, business interests trump the country’s stability.

But the problem is that Pakistan can no longer afford this type of politics. The country is facing a debilitating economic crisis, a huge debt burden, a large young population waiting for opportunities, and is in administrative paralysis (collapse is too harsh, and maybe not applicable). And the biggest problem: a looming water crisis.

When journalists tell the prime minister they are under pressure to cover petty politics instead of the real issues, he smiles.

“I am handling this pressure. Can’t you handle it too for some time? This is a phase. It will pass.”

But how long can Imran handle pressure? What will he do if he fails to meet the high popular expectations of his government?

“There is one thing I have consistently been good at for the last two years, which helped me in creating the biggest upset in Pakistani politics and brought me here,” he said.

“What is that, Mr Prime Minister?” a journalist asked.

“Handling pressure,” he says calmly, then smiles. “How do you think I got here?”

*Raiwind is former Prime Minister Nawaz’s palace in Lahore, where he lives with his powerful and influential daughter, Maryam Nawaz. Critics refer to her as Baji, which for them means controlling woman.

**The name of the powerful and resourceful media cell reportedly run by Maryam. Critics call it the Aunty Media Cell in derision.