A peddler’s life in the city of Badin: Making peanuts selling peanuts 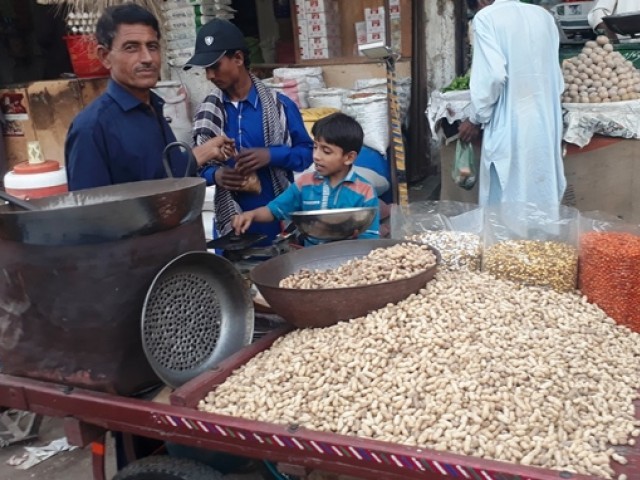 Like him, there are many others who depend on selling vegetables, juices, newspapers and so on to survive. PHOTO: MURTAZA TALPUR

My first interaction with the peanut selling peddler was nearly 28 years ago. In those days, I had gone to Badin (a city in Sindh) with my father. My father bought peanuts from him and that’s how I first met him. Just a month ago, I met him again with the purpose of writing a story about him and his life. The kind, old man was honoured and said to me:

“I am happy to know that at least someone cares about the story of a poor man.”

Muhammad Ashraf Chandio, 53-years-old and not formally educated, runs a roadside peanut cart in Badin. His father died when he was only eight-years-old and from that day, he too worked as a labourer. For 15 long years, he continued breaking bricks and stones with a hammer, digging deep with shovels and dragging concrete-filled carters. About his time as a labourer, he says:

“It was my very first experience. I took a hammer and with as much force as I could muster, hit the bricks and stones. This process was repeated all day. At the end of the day, the skin on my hands was peeling off and they were swollen. The pain was excruciating. This situation continued for many days, but eventually, I got used to it.”

Since 1985, his only source of income has been his peanut cart. He remarks:

Why then did Ashraf continue to spend his life selling peanuts? The main reasons according to him are:

“Poverty, deprivation and a lack of resources.”

Whatever little he earned was spent on daily amenities. At one point in time, he did try to expand his business by establishing a wholesale shop in the city. To help him set this up, he went to a number of friends and relatives to borrow some money, but no one agreed to help him. Dejected, he gave up on the whole idea of setting up a wholesale business and continued selling peanuts.

Ashraf leaves each day early morning and returns late evening. He pushes his cart no matter how hot or cold, come rain or shine. His hardwork and struggles allow him to earn just enough to feed him and his family. He says:

“Soaring inflation has made poor peoples’ lives a daily nightmare. Inflation has cracked the backbone of an already marginalised segment of society.”

Like him, there are many others who depend on selling vegetables, juices, newspapers and so on to survive.

Ashraf lives in a small straw cottage about one kilometre south of the city. He doesn’t just need to feed himself, but also his three daughters, wife, and son.  His son, who received intermediate education, also sells peanuts in the city. This is the tragedy of our society: a cart-vendor’s son becomes a cart vendor. A cobbler’s son becomes a cobbler. A poor peasant’s son or daughter becomes a peasant. Similarly, a minister’s son or daughter becomes a minister. Unlike in the West, where individualism allows each individual to choose their own life path, this system of family dependence prevents most people from living the sort of life they would ideally wish to live. Thus, there is no way out of this cycle of abject poverty and deprivation.

Ashraf lives in a city that is situated about 200 kilometres away from the industrial and trade hub, the city of lights: Karachi. Badin is an example of one of the most underdeveloped cities in the country. With shattered roads, bubbling gutters, a horrible stench that prevails across the city, low-hanging electricity wires, tons of roadside waste, and walls painted red with paan spit. Everywhere you look, you see people infected with all sorts of water borne diseases and diseases stemming from poor waste disposal mechanisms, reckless health conditions and malnourished children. Interestingly, the city is rich in natural resources such as oil and gas reserves, human capital, natural freshwater bodies, livestock and the fishing industry has a lot of potential, as does agriculture. In spite of all this, the people of the city are socially and economically deprived. The Pakistan Peoples Party (PPP) government has been ruling the city since the past four or five decades, but conditions here are worsening every day.

Life in the city of Badin is monotonous and the only goal is to survive on a day-to-day basis. People get up bright and early in the morning. Work all day, search for food, and come back in the evening, with or without food. Often the food search is unsuccessful and people go to bed on an empty stomach. The next day, they wake up and do this all over again. Not really living, merely existing.

In a rapidly changing, globalised world, peddlers such as Ashraf find it particularly difficult to survive. Despite Badin’s location from Karachi, there are little to no opportunities here for small businesses to be set up and flourish. Like Ashraf, there are numerous poor peddlers in Karachi too who spend their lives with no education, no healthcare and no social protection. Unless they don’t follow the criteria of this changing world which demands a skilled, trained and educated labour force, the coming days may be increasingly difficult.

The author is currently associated with the Association for Water, Applied Education and Renewable Energy (AWARE) in Sindh. He tweets @murtazatalpur83 (twitter.com/murtazatalpur83)