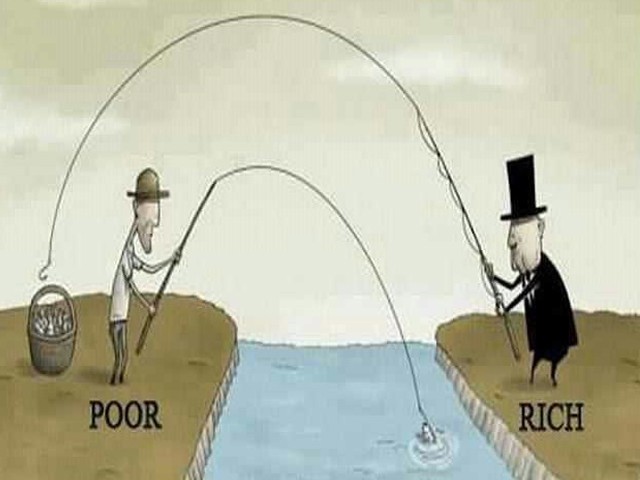 It is obvious that poverty can only be eradicated numerically with the help of fast evolving methodologies until good governance finds its way out of the corridors of power into villages and streets where real humans with real problems live. PHOTO: TWITTER

Credit Suisse insisted that the world lagged behind Pakistan in the rate of total wealth increase between 2000-2015.

If only the world could faithfully embrace the numbers that come from statisticians, every Pakistani, including the so-called 50%  living below poverty line, would have been living a  luxurious life, at least in their heads.

“The mind is its own place, and in itself can make a heaven of hell, a hell of heaven.”

When we divide the country’s total income (GDP) with its total population, we see that, unfortunately, the income of an individual living below the poverty line in Pakistan is not duly credited to him for his expenditure. This adamantly poor Pakistani struggles to take home $1,560 annually. Instead, over the decades, the share statistically belonging to him has been impacted by the 0.1% of Pakistanis with wealth – which amounts to $100,000 and $1 million – who grow richer and richer with time.

Yet, unlike the cynics and skeptics, statisticians claim that poverty has been rapidly decreasing in Pakistan. The Economic Survey of Pakistan 2015-16, using the Cost of Basic Needs (CBN) approach (taking patterns of consumption of a particular reference group) delineates that only 29.5% of the population, instead of 50%, live below the poverty line. It is, however, unknown whether the remaining 21.5% have progressed towards a higher income slab or they have suddenly attained a state of nirvana.

Obviously, it’s not the latter.

It is just that analysts have improved upon their methodology of collecting data, resulting in an optimistic average income that low-income individuals would never receive in the real world.

These findings will prove to be ironic when those depending upon the Benazir Income Support Program (BISP) will multiply – an estimation predicting the number will increase from five million in FY 2015 to 5.3 million by the end of FY 2016. The BISP will spend Rs102 billion for alleviating poverty in FY 2016 with every beneficiary receiving an amount of Rs1566.66 per month with which they can dream of starting small enterprises to become self-sufficient, instead of staying dependent upon the generosity of the BISP.

Perhaps an annual amount of Rs102 billion is insufficient to create small and medium enterprises and provide skill-based jobs to the poor. Therefore, a monthly stipend seems like a more viable and sustainable public policy instrument for eradicating poverty and decreasing inequality.

Pakistan Poverty Alleviation Fund (PPAF), following suit, has also disbursed an amount of approximately Rs11.96 billion to its partner organisations under PPAF core interventions administered under various operational units. Similar efforts for eradicating poverty will be made through disbursing zakat amounting to Rs5303.53 million among the provinces and other administrative units during FY 2016.

However, defying optimism and the impact of national programs for poverty alleviation, a study “Multiple Inequalities and Policies to Mitigate” by Oxfam focuses on multi-dimensional inequality in Pakistan. It reveals that children born to lower-income families in Pakistan during 2010 and 2011 are less likely to break their poverty trap and move to the middle class category than those born during the period of 1994 to 1995. It is certainly not possible for these children to break the inequality trap when only 50% of the poorest attend school against the 82% of the richest.

It’s obvious that poverty can only be eradicated numerically with the help of fast evolving methodologies, until good governance finds its way out of the corridors of power into villages and streets, where real humans with real problems live.

Our government should not only enhance expenditure on social protection by providing everyone a level playing field but also, more importantly, make programs such as BISP and PPAF relevant and effective with more sustainable plans so poverty alleviation is not merely restrained to disbursing money. It’s imperative to train human resource and provide them with skill-based jobs so they can become self-sufficient. This would serve as a better alternative since making them dependent upon monthly stipends may end up creating inefficiencies and distort capabilities of individuals.

In the longer run, it is also more rewarding to invest in human capital rather than improving upon mere statistical methodologies for minimising inequalities, because ascribing everyone per capita incomes – that they never get to spend– is not helping at all.