Sorry PTI, but the game of elections is poised between PPP and PML-N 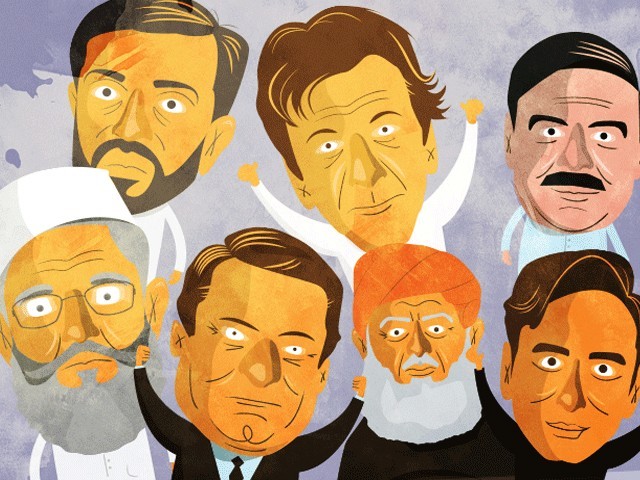 Given the dynamic circumstances of our political arena, it is almost impossible to predict a winner at this stage. DESIGN: AAMIR KHAN

The stage is all set for the battle of the General Elections 2018, with all major political parties eyeing the throne. Though we are more than a month away from the big day, the three leading parties, the Pakistan Muslim League-Nawaz (PML-N), the Pakistan Peoples Party (PPP), and the Pakistan Tehreek-e-Insaf (PTI) are all hoping to make the government in the centre as well as in their respective provinces.

Given the dynamic circumstances of our political arena, it is almost impossible to predict a winner at this stage. Nonetheless, looking at the present situation, one can try to assess whether the new elections will bring the winds of change that we hopefully expect, or whether our democracy will shock further with its unpredictability.

PML-N is still the favourite

While the surveys are in PML-N’s favour, ground realities are changing every second, especially as certain forces work to ensure that PML-N does not return with the same fervour. Strangely, as everyone focuses on PTI’s chances, no one is discussing the dark horse – PPP – which is very much still in the race.

The PPP won around 40 National Assembly (NA) seats in the General Elections of 2013, making it the second largest party in the parliament. Unlike the previous elections where PPP was not allowed to run an election campaign in Khyber-Pakhtunkhwa (K-P), this time the party is freely campaigning, which can bring in a victory of around eight to 10 seats in K-P. Likewise, being instrumental in toppling the PML-N from the government of Balochistan, the PPP has the chance of securing some seats from Balochistan as well. Additionally, the void left by the Muttahida Qaumi Movement (MQM) in Karachi and Hyderabad is surely going to benefit PPP too, giving it the opportunity to grab an additional 10 to 12 seats.

Big win likely in NA for the PPP

Unlike the previous General Elections, the PPP has improved its relationship with the powers that be, which is why winning 60 to 65 NA seats does not seem unlikely. If it manages to win 65 seats, it will be in the driving seat to form a coalition government either with PTI and independents, or with PML-N and Muttahida Majlis-e-Amal (MMA). The latter seems unlikely, for if the sources are to be believed, PML-N will not be sitting in a coalition government with the PPP.

Like always, PTI is sure it is going to sweep the elections, but once again, the reality on the ground is entirely different. In the previous elections, PTI was able to win a major chunk of seats from K-P. However, this victory was the result of the Taliban not allowing the Awami National Party (ANP) and PPP to campaign in K-P. As a result, PTI benefitted from the space left by the two major parties.

This time both ANP and PPP are running a strong campaign, and given PTI’s performance and the incumbency factor working against it in K-P, it will be very hard for the party to even win 17 NA seats from K-P. If it somehow manages to win even 10 seats, that can be labelled a good show.

Will electables change the game?

In Punjab, dozens of electables have jumped ship from PML-N to PTI, especially from South Punjab, and this is where PTI can really benefit. In the last General Elections, PTI was able to win only five NA seats from Punjab, but now with big names like Nadeem Afzal Chan and Raza Hiraj in its league, PTI stands the chance to win around 30 to 35 NA seats from Punjab.

In Sindh, however, other than Shah Mehmood Qureshi’s constituency, the chances are very dim for PTI. Even in Balochistan, winning two seats will be a miracle for PTI. So this leaves the total tally of the expected number of seats for PTI somewhere amid 45 to 50 in the NA.

Had Imran been able to focus on central and northern Punjab with the new narrative of highlighting the weak points of PML-N’s Punjab government, its chances of winning more seats would have been higher. However, Imran stuck to his old mantra of accusing Nawaz Sharif and holding the PML-N responsible for every ill the country is facing at the moment. His old narrative did not prove fruitful in attracting large numbers of electables from northern and central Punjab, neither has he been able to dent the PML-N’s vote bank through this narrative, if the by-elections are any indication. In fact, there is only a wave of increased sympathy in Punjab for the PML-N’s supposed victimisation.

If given a level playing field, PML-N is most likely to return

Coming back to the PML-N, with its strong grip over central and northern Punjab – still the strongest and most coveted region in the election – the party is all set to win at least 70 NA seats. The Lahore division, Gujranwala division, Sialkot division, Rawalpindi division and the Sargodha Division, are all still considered the PML-N’s forte. If the party can win around seven to eight seats from the Hazara belt and another five to six seats from Swat, Shangla and adjacent areas – the stronghold of Amir Muqam – it can eventually win around 90 seats in the NA easily.

PML-N’s coalition government is the most probable outcome

This number can give PML-N the status of the largest majority party in the parliament, but it is not sufficient to get a simple majority. This means the PML-N will bank heavily on Mahmood Khan Achakzai’s Pakhtunkhwa Milli Awami Party (PkMAP) and Dr Abdul Malik Baloch’s National Party. Additionally, the MMA’s revival, with an alliance between Jamiat Ulema-e-Islam-Fazl (JUI-F), Jamaat-e-Islami (JI) and other religious parties, will provide the trump card.

Maulana Fazlur Rehman’s JUI-F normally wins 12 to 15 NA seats from K-P and Balochistan, and with JI and other religious parties as allies, it can increase its tally to 20 seats. If we add the number of MMA, PkMAP and BNP’s seats with PML-N’s expected 90 seats, the PML-N will be in a position to make a coalition government in the centre as well as in Punjab, particularly with the help of independent candidates.

PPP has a shot at the centre

If, however, the PML-N shows an average performance in Punjab and instead of winning 90 seats it manages to win only around 70 from Punjab and the rest of the country, then the equation will be completely different. It will then be a coalition government led by the PPP, MMA, ANP, and the independents.

It seems that the game is poised between the PPP and the PML-N, though PTI’s eventual performance could cause an upset to this prediction. After all, a coalition government is deemed easy to control and dictate by the forces that be. The PTI can turn the tables if somehow voters from Punjab entirely turn against the PML-N, which seems very highly unlikely.

The road to Islamabad goes through Punjab, and we all know whoever wins Punjab actually wins the centre as well. Whether we see a PML-N led coalition or one led by the PPP, or even miraculously one led by the PTI, the game will change depending on help from the independents from Punjab, the MMA and the ANP.