“They hired a Pathan?! I thought it was for smart people”: Pakhtun stereotyping is not ‘just jokes’ 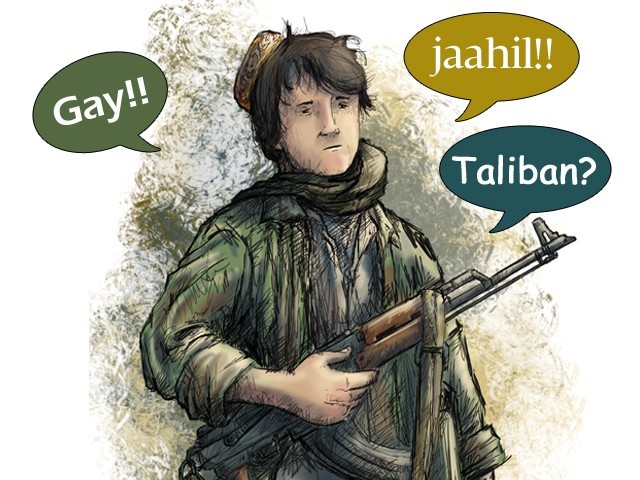 Some of the Pakhtun stereotypes prevalent in Pakistan are that of illiteracy and religious extremism. ILLUSTRATION: JAMAL KHURSHID/EXPRESS TRIBUNE

I recently moved to the United States for my graduate studies. At the Denver International Airport, a large poster of Malala Yousafzai welcomed me. I wished this would not be the only time I felt at home, but I remained sceptical. Only recently had I read a news article about the increase in race and religion-based violence in America. I decided to reserve my judgement for later. Inadvertently though, this brought back memories of another relocation I experienced three years ago.

On June 10, 2015, a week before I graduated from the Ghulam Ishaq Khan Institute (GIK), I received a job offer from a renowned fertiliser manufacturing company. I was ecstatic. But a quick Google search revealed that the location, Rahimyar Khan, was exactly 1,000 kilometres away from Malakand, my hometown. During the arduous bus journey, I kept wondering if I was prepared for the unique challenges of the job. What if my GPA was too low? Upon my arrival at the plant’s township, I realised that none of these factors were relevant. In fact, a wholly unrelated aspect of my identity would be the centre of attention – my race.

I was not new to racial stereotyping. Racist jokes have always found comical appreciation from our culture. Yet somehow, in a company of close friends, jokes were “just jokes”. It was not until I was surrounded exclusively by people of races not my own, at professional positions much higher than mine, that I realised how detrimental “just jokes” could be. In the following paragraphs, I recall some events that highlight my ordeal living as a Pakhtun in Punjab.

I was hired into the instrument and control (I&C) department, reputed for being the department with the smartest people. On my first day, I met a young engineer who had been working at the plant for five years. Prompted by my accent, he asked me where I was from.

“Oh, they hired a Pathan in I&C! I thought it was for smart people,” he remarked.

Unlike the people around me who laughed uncontrollably, I struggled to find the right expression. I tried to assure myself that this would be an isolated incident, but over the next two and a half years, I would hear hundreds of racist slurs, jokes and inquiries based on stereotypical notions ranging from terrorism to homosexuality. Shockingly, the offenders did not come from a single race or even age group. I was marginalised and mocked by children as young as six, and department managers as old as 56.

Wit aside, another Pakhtun stereotype prevalent in Pakistan is that of illiteracy and religious extremism. As someone who has always stood for interfaith harmony, I was the farthest from this stereotype of all. This, however, did not stop an elderly mechanical engineer from confiding in me that he was a huge admirer of Omar sahab. Upon my polite inquiry of who Omar was, the gentleman replied, “Mullah Omar”. I nodded, thinking that if he was going to pigeonhole me into a box, he should have at least used the right box.

Other incidents involved questions about how much land my father owned to afford to send me to the GIK Institute. The effort to engage in debate about prejudice and stereotypes did not appeal to me. A knowledge of the fact that my father was a doctor and an author of two books, would only elevate me to the title of an “exception”. But would that stop further stereotyping?

I am a straight man and hold nothing against gay people. But the idea that an entire race can be homosexual eludes me. Two Pakhtuns walking together would be no less than Pakistan’s own pride parade, a spectacle to enjoy for both the young and the adults. On the spectrum of stereotypes from positive to neutral to negative, I did not know where to place this one.

The confusion did not end here. Conforming to the stereotype about Pakhtuns being assertive and powerful, I was expected to display masculinity. How can I both be gay and manly at the same time? The stereotypes were not even consistent, and it agitated the critic inside me.

Is it all bad?

Reflecting on the idea of positive stereotypes, is it really always bad to be stereotyped? What harm could the stereotypes of toughness, strict religious adherence or bravery do to me? After all, these are desirable qualities in Pakistan. It turns out to be more complex than that. Positive stereotypes like athleticism, righteousness and intrepidity set the bar very high for people like me who may not fit well with them. I played a fair bit of sports, but seeking constant approval of the other two was beyond me.

Proposing peaceful solutions to office fights was too ‘un-Pathan’ of me. I was the go-to person when there was confusion about which dua (prayer) to recite during a lunar eclipse. I did not like the extra pressure of conformity to positive stereotypes. No matter how hard I tried, I always fell short of their expectations. A pedantic knowledge of the solar system could never fill the gap a dua left. Consequently, I was always vulnerable to the internalisation of unwarranted doubt in my abilities as an individual.

This disconnect from my own race, in addition to the alienation from other races, effectively denied me a sense of belonging. In moments like these, I would find solace in books; the words never changed based on who was reading.

The Pathan on television

Television, however, was not an option. Prominent Punjabi comedy shows airing on news channels reinforced the stereotypical image of Pakhtuns. Even the state-owned Pakistan Television aired an extremely racist poem in the name of humour in June 2017.

Earlier in 2013, one of the biggest mobile operators in Pakistan aired a TV ad which depicted Pakhtuns as dull-witted. Images of turban-clad Pakhtuns have been used to represent terrorists with impunity. Media thus is arguably one of the biggest contributors to the normalisation of racist narratives.

In October 2017, I resigned from my job and moved to Peshawar. This is a personal, rather perfunctory account of my experiences. However, let that not take away from the massive scale on which Pakhtuns are stereotyped on a daily basis. I dismissed a lot of these incidents as involuntary misfiring of the amygdala, an unwanted consequence of millions of years of biological evolution. However, I cannot help but mention how detrimental stereotypes, prejudice and racism can be for a community.

Seemingly harmless stereotypes can turn into ugly scapegoating, especially in the time of crisis. A local example is that of blaming Pakhtuns and Afghans for terrorism. From a global perspective, the issue is similarly manifested in the institutional racism in enforcing immigration laws.

Stereotyping comes naturally to all of us. Fortunately, human beings are capable of not only learning but unlearning. We have already unlearned numerous primitive behavioural traits which were not useful anymore. We just need to add stereotyping to the list. And until that happens, we always have the choice not to act on them.

The author hails from Malakand, and is currently pursuing his Masters degree in the United States.