Dhaba vs fine dining: A $60 meal at a Michelin star restaurant or a $2 meal fit for a Mughal emperor? 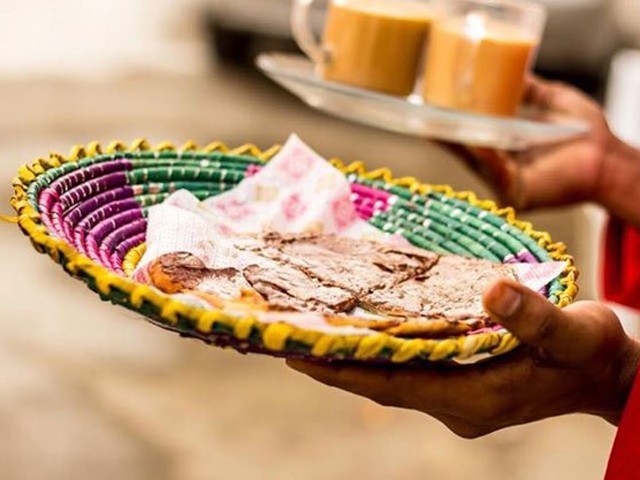 My experience brought about a new found approval for dhabas and taught me that taste need not be defined by your surroundings. PHOTO: FACEBOOK/ CHAIWALA

Known for the fresh sub-continental food they serve in an open air atmosphere, dhabas can be dubbed as local fast food joints that offer patrons tasty, traditional dishes at an affordable price. The word ‘dhaba’ has become so popular in fact, that both Indian and Pakistani restaurants abroad have adopted it as a part of their name.

I grossly undervalued the economical and cheerful appeal of a dhaba until a few months ago, when visiting the land of gold souks and skyscrapers otherwise known as Dubai. I decided to go for dinner at a posh restaurant called Guilt. This of course is not the restaurant’s real name; alas you were reading a restaurant review.

Not knowing any popular dhabas in Dubai, eating at Guilt made sense at the time seeing that I was on holiday and that the restaurant was located inside the hotel I was staying at. As I arrived that evening for dinner, I was shown by the doorman to a woman at the reception desk who showed me to a man who showed me to the door of the restaurant where yet another man takes you to your table – I felt like the baton in a relay race.

Guilt was a Michelin star fine dining restaurant, but besides having gone there to enjoy the food on offer, I also went there to see its guests because I am indeed a people watcher. So you can imagine the crushing disappointment of finding that the restaurant was not a sparkling sea of noisy Arabs or expatriates even. In fact, most of the diners that night seemed to be burnt out elder folks with a taste for what I was about to discover was overpriced, undercooked and pretty, yes, pretty food.

With hardly any guests to laugh at, I thought I would have a giggle at the food. Good idea, if only I could find it. It turned out there was a sliver of what looked like thinly sliced raw meat on my plate. So thin in fact that when you tapped it with a knife it made a clinking sound. I tried scooping it up with a fork, and then a spoon but neither was successful, so in the end I gave up and just licked the plate. What did it taste like? Well, Carpaccio I guess, with a hint of porcelain.

Then the waiter came with the water. He unscrewed the cap as though diffusing a nuclear bomb, and for one glorious moment I thought he was going to ask me to sniff it. But that would have been only mildly ridiculous compared to the main course that night which resembled a Jackson Pollock painting on a plate. So instead he poured a splash of water into my glass. Twenty dollars for a bottle of water, justified only if you get it out of Sana Javed’s bath but pour away I gasped, “it will be fine”.

Finally came the bill, which was perhaps the funniest part of all because when translated into English, came to around $200. The Foie Gras alone had been for $60, and for that price I would expect the damn thing to get up and do a song and dance routine. Instead it just lay there, being the dead liver of a fattened duck.

Since perception is subjective, readers may be wondering why I am comparing fine dining to a dhaba? Well, amongst the world’s culinary masters, the view is that food should not only entice our palate, but awaken all our senses, at a cost. However, considering the fact that more than half the world’s population lives on less than $2.50 a day, my argument stands: it does not matter how much money you possess; if you wish to create artwork, use a canvas not a serving dish. If you wish to see art, go to a gallery not a restaurant. Some of the most delicious meals I have eaten have also been the ugliest. After dinner at Guilt, trying to figure out why anyone would pay an exorbitant amount of money for otherwise bland albeit attractive food was a hard nut to crack.

That said, Dubai is perceived as a city of immense opulence and every such city should have a place which serves cupcakes made of edible gold or how I see it: a giant black hole which swallows up precisely the sort of people the rest of the common herd wishes to avoid. Did I overpay for what was supposed to be a gastronomical experience? Guilty as charged.

My experience brought about a new found approval for dhabas and taught me that taste need not be defined by your surroundings. Dhabas with their daigs and charpoys not only offer better food, but a better overall atmosphere. That is why I love visiting purveyors of the finest nihari, chaat and garama garam halwa puri on my trips home. The hustle and bustle, the smell of sumptuous food, a sea of vibrant patrons, the chefs theatrics while pouring a cup of karak chai, the steam rising from within his brewer pot, all make for a lush experience which should not be taken for granted. Interestingly enough, a lot of the classic dishes dhabas serve are derived from ingredients used during the Mughal era, and for a mere $2 you can feel just as an emperor would after a meal: fat, happy and satisfied.

Dhabas also represent a focal meeting point for friends or acquaintances and can play an important role in society as being venues for social and political interactions. Karachi is seeing a steady rise in dhaba culture and considering the talkative nature of most Karachiites and our addiction to chai, this trend makes perfect sense. ‘Modern’ dhabas are bigger, cleaner and more family friendly compared to older, more classic establishments thus adding to Pakistan’s insatiable appetite for fast food. My only concern being the westernisation of our traditional eateries, because nothing would break my heart more than finding cupcakes on the menu of a dhaba.

The author is an educationalist and industrialist in the textile and clothing sector of Botswana (Southern Africa). Born in Pakistan, he is an avid reader and writer of issues big and small.

To squat or not to squat?