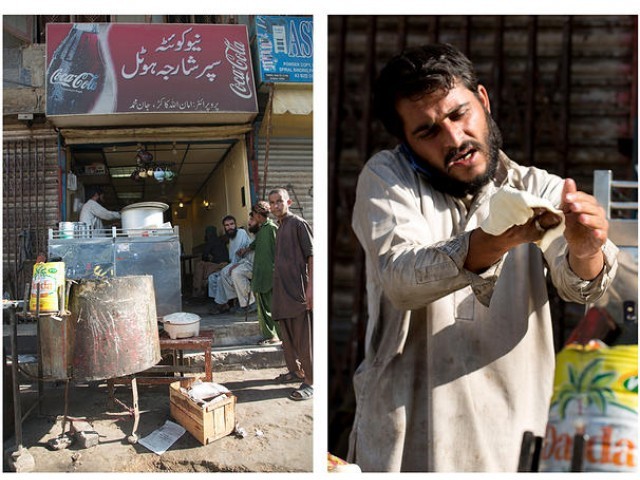 Strangely though, as I have started peeping down regularly, the only thing that always strikes me is the relentless energy that all the staff members exude at that early hour of the day. PHOTO: SAADIA TARIQ

Did you know that there is a chai ka dhaba (tea cafe) in Karachi that has four branches in one of the most affluent parts of the city? Similarly, were you aware of the fact that this said cafe has only three items on its menu and it operates from 6:30 in the morning till late in the night?

Well then, don’t be disappointed; I didn’t know these facts either.

In fact, there was a lot more I didn’t know about this peculiar cafe, until I decided to investigate and find out more.

Almost every other morning, as I hip-hop on the elliptical machine cornered in a local gym and peep out of the window to observe the outside world, I notice the bustle surrounding a small, Coca-Cola bannered dhaba named the ‘New Quetta Super Sharjah Hotel’ located near my gym.

All nearby shops around the restaurant are usually closed by the time the hotel starts serving its delicacies. The staff at the cafe is seen smoking away cooking oil on a huge flat pan, transforming freshly made dough into yellowish-golden, oil dripping parathas, served with hot steaming tea to all those who are heading out for their early morning mazdoori (labour).

Those more ravenous than the rest have the option of ordering omelettes as well, cooked on the same black, flat pan.

Strangely though, as I have started peeping down regularly, the only thing that always strikes me is the relentless energy that all the staff members exude during those early hours of the day. Be it the food server, the tea maker or the paratha man, all of them look so focused and committed, going through with their daily, monotonous chores with the utmost finesse, or whatever finesse is required to run a dhaba.

After days of observation, I decided to go and speak to them. As I approached them, with caution, they eyed me with suspicion. I gathered it was because their clientele primarily consisted of men but I was proven wrong when they immediately questioned me,

(Are you from the media?)

When I assured them that I did not belong to any media channel and that they will not be featured on any political tabsaraas (discussion forums), they eased down and very reluctantly divulged some information.

After moving to Karachi from Quetta, Mr Katkar and his family opened up a tea joint near the Karachi Highway. This was roughly eight years ago. Today, they have four outlets in Defence Housing Society (DHA) – one of the most upscale residential areas in Karachi.

This particular outlet sells 200 parathas every day, from 6:30 in the morning till midday and sells tea till midnight. The dough is freshly prepared every morning at the outlet. Albeit a one-egged omelette, a paratha or a cup of tea, nothing exceeds Rs25 per item.

When asked about his daily sales or savings, he was cautious to answer, and naturally so. However, he did say that,

(We usually save four to five thousands, on an average, Madam)

However, he tried to evade the question and I did not persist either.

The cafe employs six people and pays a rent of Rs17,000 per month. I asked Katkar how much he pays his staff and he gave me a smile with his tea-stained teeth, saying,

(They’re all our people, Madam)

Yet another evasive reply; he was really good at this.

Soon enough, I realised he was getting uncomfortable with my presence and didn’t want to answer any of my inquisitive questions. Hence, I decided let him go and took his permission to take some pictures while he worked at his station. He smiled in agreement and immediately took out his cell phone, which had been buzzing in his side pocket all this time.

Whilst I clicked away, he made about two parathas and one omelette for a customer and all this while he was on his phone, intently chatting away with a ‘khocha’.

When I finally thanked him and made my way towards my car, he shouted from behind,

(Madam, where are you going? Aren’t you going to have any tea or paratha?)

This was accompanied with yet another smile.

Katkar and his family may not have become very successful so far, but they are striving to climb up the social ladder. In the last few years, they have made a name for themselves. They seem complacent with the limited menu and do not desire to diversify it – serving from dawn to midnight, they have monopolised on early risers and late sleepers alike.

Happy and contended, they continue to serve hot, steaming, fit-for-slurping chai, flat bread doused in hot oil and a freshly whipped egg cooked into an oblong-shaped omelette to innumerable customers. Eight years, four outlets and with only three food items, the cafe has marked its territory and that is something they can be proud of.