Ten things I hate about Dubai 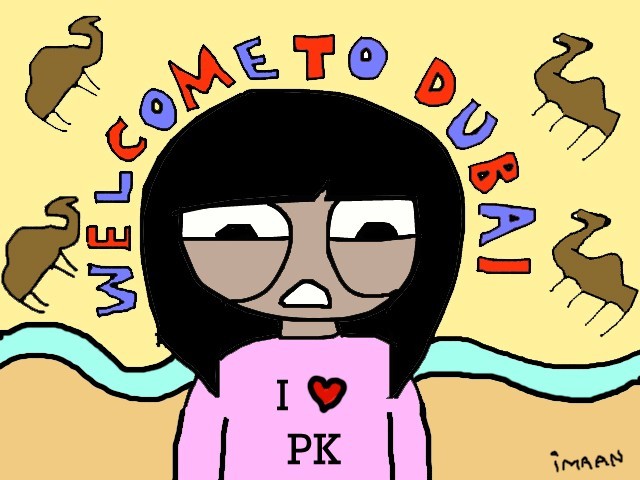 Now, I know that the title makes me look like a snob who gets to go places but is just so ungrateful. However, my trips to Dubai are really never out of willingness to visit, but mandatory – mum’s orders.

I was born in Dubai and spent my early years there. Now I have to visit twice a year to see my dad and brother, them being one of the few good things about the place.

Here are ten things that I don’t like about Dubai:

I know malls are fun, but what if they were all you could go to? How many times will you go on the dhow cruise, the desert safari or the beach? After all, one comes back to the nearest dull (albeit air-conditioned) mall.

If you aren’t a shopaholic, Dubai’s not the place for you. I have lost the little appetite I had for clothes, window shopping and causeless mall-walking, and so my trips are spent reading a book with my hipster face on at Starbucks.

At first I thought that I hated pointless strolls in the mall because I wasn’t accompanied by friends. However, for two years, I’ve had some social life there and it isn’t much different – the same places, the same restaurants, the same bored me.

Even people who have never visited Dubai have heard of this – everything is too expensive. Another thing is that the price of the same article in two different shops is completely different. I’ve even had experiences where shops next to each other would charge double the amount for the same thing. I don’t understand the reason here.

Oh hey, I have a nationality other than Pakistani. LOL JUST KIDDING, I was born in Dubai.

No one cares if you were born in Dubai or have lived there for 40+ years. You don’t get any extra benefits and if God forbid you’re a guy, you may want to pack your junk and leave as soon as you hit 18 and are no longer under a work visa. If you’re a girl though, Wallah you can under your dad/husband’s visa without having to work.

This part my dad hates more than I do because he is always flooded with fines. He literally wakes up to a parking fine every morning. Poor man is already in his sixties, have some mercy!

You get fined over small things like parking your car so that the bonnet is slightly casting a shadow on the curb. As a Pakistani (who is able to do just about anything and get away with it), I’m not a fan of such a suffocating system.

These fines are not small either. You must pay 200 dirhams for the above mentioned example. That’s more than Rs5,300! I can safely say that Dubai has made a hefty amount of money just from parking fines (half of it coming from a certain suit-clad man in his sixties).

It may be wrong of me to hate on Dubai’s extravagant nature because it is after all a tourist destination, but good God, do these guys have a hole in their hand!

I bet that a display of fireworks is happening right now in at least three places in just Dubai. Fireworks on New Year’s Eve, Christmas, or Eid are great, but must there really be fireworks all through the duration of Ramadan, the winter/summer shopping festivals?

But if they really have the money to spend, what can one say?

There is no such thing as a shopping festival in Dubai. The only thing you will see in the name of these “festivals” is a small area with rides for the children and a few kiosks on roadsides selling made-in-China ornaments and mobile accessories. These festivals were better at least seven years ago when fun events would be held at malls and there were real discounts on things.

There are discounts galore! Seeing a “70% off” sign displayed outside all stores is normal. However, when you step inside, you will find that everything costs the same as it always did. There is too much false advertising. Pierre Cardin stores alone have had a “75% off!”sign for as long as I have seen it in Dubai!

The terribly hot weather may be one of the few reasons people resort to going to air-conditioned malls.

I should not have too much of a problem with it since I’ve always lived in Karachi. However, in the summer, Karachi is breezy by the night.

Dubai is just a darker, hotter, more humid hell hole by night. And forget about the afternoons! If you have somewhere to go in the afternoon, think twice before you sit your tush down on the burning leather car seat. I’ve had the experience of baking things nobody would want baked.

Would it be racist of me to say that the Arabs are kind of racist towards us South Asian folks?

They have their nose in the air and most of the times don’t prefer to interact with South Asians. There is no such thing as labourer rights too, by the way. Most of the labourers are Pathans from Pakistan.

My brother and his South Asian friends are often stopped by the police and told to carry all his identification documents at all times.

9. Strangled journalism and the media:

The United Arab Emirates isn’t the only country in the world where the media and journalists aren’t given the most basic of freedom. Hence there is less scope for what I would call real journalism, but if you are a fashion and tourism journalist, you may want to try your luck.

The Terminal One is a huge airport in Dubai.

This isn’t the good kind of huge at all. After you’re done with the check-in counter, you basically have to cross half the distance to your destination city on foot, on escalators. No, I’m just exaggerating, but you have to walk a lot! I am asthmatic by the time I reach the departure lounge.

I think having to land at Terminal One may be one of the reasons my trips to Dubai start horribly.

And with that I am done with the ten things I hate about Dubai.

DISCLAIMER: You may not have had all the bad experiences as the author, but let’s not forget that she’s broke most of the time, which doesn’t work for Dubai.