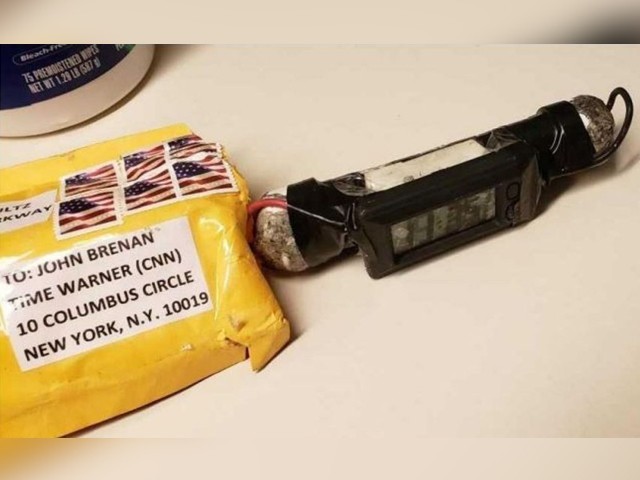 The image of a package sent to CNN on October 24, 2018 shows a rudimentary explosive wrapped in electrical tape with a digital timer attached. PHOTO: ABC NEWS

Words matter and have consequences, especially when they come from the mouths of those at the helm of affairs, who rule our destinies. What the president of the United States says therefore matters, and if it were to take a more civil tone, it would indeed make a difference.

To many, Donald Trump has no shame. While people’s lives are being threatened because of his ridiculously divisive rhetoric, he instead remarks that most of the anger prevalent in society is caused by press reports that he feels are “false and inaccurate”.

A very big part of the Anger we see today in our society is caused by the purposely false and inaccurate reporting of the Mainstream Media that I refer to as Fake News. It has gotten so bad and hateful that it is beyond description. Mainstream Media must clean up its act, FAST!

It didn’t really come as a surprise to anyone when after the recent mail bomb episode, Trump yet again decided to exclude himself from any scrutiny and blamed the media instead. He repeatedly calls others to change and never acknowledges or shows any willingness to change himself. It all makes sense, since he once said he’s never done anything that required God’s forgiveness.

The Obamas, Joe Biden, the Clintons, Eric Holder, John Brennan, Robert De Niro, CNN, and the list goes on. These are the people who received bombs in their mail, and not even once did Trump bother to reach out to them and offer a few words of sympathy.

The United States is dancing to Trump’s uncivil and reckless tune. This election season, Trump has gone from being the defender of US frontiers to being a ‘nationalist’ who incites crowds at rallies to go after the Democrats and the progressives. Disagreement and debate with decency and respect is no longer part of the equation. The straight shooters, the sucker punchers, and Trump’s “poorly educated” are out to destroy the very carefully crafted American fabric of values and the lofty ideals that the country, until recently, stood for.

I strongly condemn the attempted acts of violence against President Obama, the Clinton family, @CNN & others. There is no excuse—America is better than this.

Gratitude to the @SecretService and law enforcement for all they do to keep this nation safe.

One is not sure if this is at all true. Is America really better than this? I’ve heard people say this ever since Trump descended on the political scene. Evidently, there is not much to write home about in terms of peaceful and civil discourse. We see white supremacists, child molesters, rapists and drunkards, all out there and left unchecked, only because the guy in the Oval Office is patronising them all.

Also, does Ivanka strongly condemn her father using the presidential bully pulpit and years of campaign rallies to constantly stir up hatred against the media, the Clintons and the Obamas?

Whoever is behind the mail bombs is very much dialled into the ongoing discourse. All the targets in this week’s mail attacks have been Trump’s worst enemies. Trump has spent the last two years celebrating violence against his enemies, and at worst, inciting it. His efforts are now bearing fruit and the followers of his “cult” are out creating havoc amongst the public at large.

While there is hesitation in holding Trump directly responsible for the mail attacks, there’s no doubt that he’s an insult to the constitution, the government, the people and the nation. He’s an anti-thesis of the ‘united we stand, divided we fall’ phenomenon. He’s no longer breaking the country apart – he already has.

Brennan, the former director of the Central Intelligence Agency (CIA) and one of the recipients of the bomb package, said to Trump the following day:

Stop blaming others. Look in the mirror. Your inflammatory rhetoric, insults, lies, & encouragement of physical violence are disgraceful. Clean up your act….try to act Presidential. The American people deserve much better. BTW, your critics will not be intimidated into silence. https://t.co/cS5qNiuU7o

We still have almost two weeks to go for the Midterm Elections on November 6th. All this chaos is just beginning to unravel. As Trump gathers momentum, going from rally to rally and fighting for the Republican (read: his own) cause, a lot more nastiness can be expected between now and then. Trump will not stop inciting the minds of his followers anytime soon. He wants to win, and he wants to do so no matter what the cost.

In the words of the celebrated American analyst, David Gergen,

“Trump unleashed the dogs of hatred in this country from the day he declared he was running for president, and they’ve been snarling and barking at each other ever since. It’s just inevitable there are going to be acts of violence that grow out of that.”

It may very well be that we cannot rely on Trump to talk about unity and peace. The power truly resides in the people of this country. People control what resonates and what is rewarded in politics. We are the ones who control the discourse.

Some of the country’s leading historians, who called the targeting of President Trump’s political enemies by an apparent terrorist an “unprecedented” development, also said the president bears at least some of the blame for the fresh wave of terror. But Trump is simply incapable of being a unifier or accepting any personal responsibility.

America may not be better than a disturbed and polarised polity anymore, but Americans deserve more – so much more – from a president. The fact remains that we may never see the much talked about and anticipated “blue wave” happen, and we may not be spared the aggravation of Trump’s ultra-atrocious behaviour in the near future.

I’m just sorry. I’m so sorry about our deplorable state of affairs. May the Lord have mercy on us.