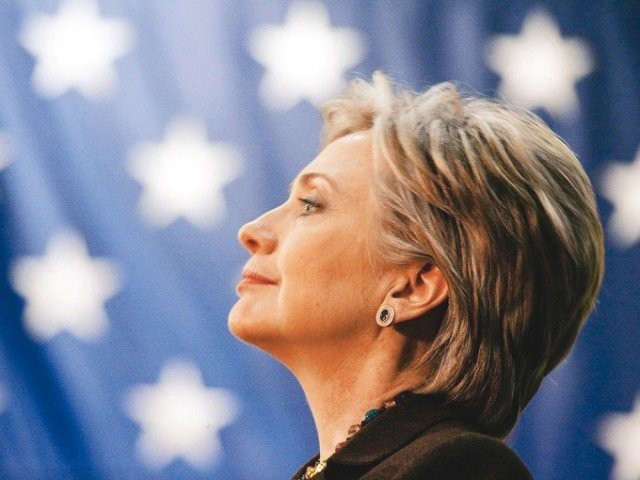 Hillary Clinton will be contesting in the US presidential elections. PHOTO: AFP

Hillary Clinton recently announced that she would be running for the US presidential office for the next term. If she manages to win, she will be the first female president of the United States, which in itself is quite a feat considering the fact that the US has an extremely small percentage of female representatives in congress as compared to men.

Clinton promises to be a ‘champion’ for Americans, but her popularity ratings have witnessed a sharp decline from a high of 67% to a mere 49% since her departure from the State Department. The question remains – how will she manage to beef up her points with the common American man before the presidential elections?

Will Clinton’s tax reforms or health care policies be the solution to America’s problems? Or will it be her notorious and aggressive war policies listed below:

1. During her tenure as secretary of state, Clinton supported the escalation of the Afghan war

Upon being questioned about increasing number of troops on ground, she said,

“I would, it depends on conditions, on the ground, and what is being asked for.”

2. Clinton favoured and backed George Bush’s decision on the Iraq invasion but later put the entire onus on Bush and said it was “Bush’s war”

During her floor speech, she said,

“It is a vote that says clearly to Saddam Hussein: This is your last chance. Disarm or be disarmed.”

3. She threatened Iran if it ever attacked Israel

In regard to Iran, she said that US would strike Iran and “totally obliterate” it if it ever attacks Israel using nuclear weapons.

She supported the incognito raid on Osama Bin Laden ‘secret hideout’ in Abbottabad, Pakistan, since she feels that those who help terrorists should feel the “wrath” of US.

5. If Iraq wasn’t enough, she was one of the key policymakers for the war in Libya

“Jihadist groups are governing territory. They will never stay there, though. They are driven to expand. Their raison d’etre is to be against the West, against the Crusaders, against the fill-in-the-blank—and we all fit into one of these categories. How do we try to contain that? I’m thinking a lot about containment, deterrence, and defeat.”

6. She urged Barack Obama to aide and arm the Syrian rebels and administer air strikes against the Bashar al Assad regime

“I can’t put a definite hour and minute on it, but the Assad regime is not going to survive. I just wish it would end sooner instead of later…That would be the best signal we could send to Assad that his days are numbered.”

7. Clinton supported Israel’s attacks on Gaza in 2014, which resulted in thousands of innocent lives being lost

“I think Israel did what it had to do to respond to the rockets, Israel has a right to defend itself.”

The US has launched various international intervention campaigns, most of which have been unsuccessful, starting from the Vietnam War. Should Clinton remain steadfast in her rigid war policies considering most Americans view the wars as unsuccessful and an utter waste?

Taking her approach towards Pakistan in perspective, Clinton seems to have it all chalked out for our government as to how we should deal with terrorism. During her visit to India last year, she openly slammed Asif Ali Zardari’s government for not knowing of connections between the ISI, military and extremist groups as well as spewed subtle accusatory remarks towards the top tier of our government and military officials.

She further went on to state,

“It’s like keeping poisonous snakes in your backyard expecting they will only bite your neighbour and what we are seeing now is the continuing threat to the state of Pakistan by these very same elements.”

Thanks Hillary, we really needed you to sow more seeds of conspiracy and dislike in our neighbouring country.

To me at least, drone strikes in Pakistan are a way of emasculating Pakistan; it’s like America is saying,

“No Pakistan, you aren’t good enough, so let us take over.”

The definition of sovereignty remains unknown to the American government. Infringing on international territories seems to be their forte. What the American government, along with Clinton, need to realise is that they shouldn’t dive further into military interventions; they’ve lost enough to know that they should step back. But will Hillary Clinton, as future President of the United States of America, be able to promise that to the common American man?

If the Pakistani government wants to fill their coffers with military assistance loans and aid packages, Clinton’s hard stance on terror will benefit Pakistan. Other than that, benefits are valued at nil.