Considering torture is illegal as per US law, how is a brutal torturer appointed as the new CIA chief? 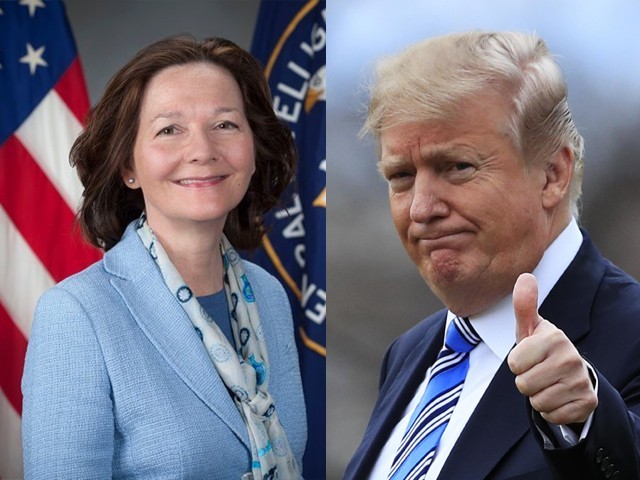 This being the CIA and Gina Haspel having a record as an undercover spy for most of her career, her public record is murky.

The CIA occupies an almost mythic space in the minds of those of us who watch Hollywood movies. Time and again, we come across movies that show a direct link between the CIA and various atrocities around the globe. Movies such as the Bourne series and the Mission: Impossible series bubble up plenty of theories regarding how the CIA operates.

Specifically for Pakistan and the Muslim world in general, such movies are proof for drawing room analysts that the CIA has a one-point agenda: defeat the Muslims. Movies like Zero Dark Thirty showed a heroic account of the CIA against brutish Pakistani agents. Enemy of The State verified what many Muslims already believe – that the CIA has a web of operatives spread across the Muslim world spying on their communities and maligning their reputation. And then there are movies like Rendition, an account of an Arab-American who gets picked up from Chicago and is taken to a prison facility outside the US (in this case Africa) and is subjected to interrogation and torture over a suicide attack.

What happens in the movie is sold as a work of fiction, but now we have living proof that it may not be so far from the truth. President Donald Trump announced a new director of the CIA just last week – Gina Haspel. While his tweet regarding the appointment touted the fact that Ms Haspel was the first woman director of the CIA, what he left out was more telling.

We live in a hyper-connected and social media driven world. There is very little chance of hiding our actions, regardless of how much we try. Intrepid journalists and internet provocateur alike raced to find out who this person was. Turns out she was the deputy director of the CIA (effectively the second-in-command) and had a career that spanned postings across the globe. They also found out through a prominent positing that Haspel had been running a black site for the CIA in Thailand in the wake of 9/11.

Black site in the CIA lingo indicates a site that is outside the United States. As such, it does not bear the responsibility of reporting to the central CIA command. It can also afford to be less than transparent regarding the way it operates. The CIA opened up a bunch of these sites after 9/11 in order to speed up interrogation of al Qaeda members as they were captured from various parts of the world. As suspected, al Qaeda operatives were rounded up, and were sent to various CIA black sites across the world instead of being brought to the United States to be tried under the Geneva Convention. Geneva Convention enforces laws that defend the rights of prisoners of war. Torture is also deemed illegal according to US constitutional law. By not bringing them to the United States, the CIA effectively avoided any nosy lawmakers or NGOs that might have protested and slowed down the intelligence process by demanding the humane treatment of these prisoners.

This being the CIA and Haspel having a record as an undercover spy for most of her career, her public record is murky. US lawmakers are already up in arms about her role in promoting severe torture. They contend that while Haspel might be an able operative, she should be answerable regarding her role in running a black site. They feel that by promoting severe torture against prisoners, Haspel went against the United States stature in the world as a beacon of morality and supporter of law. Further complicated is the fact that Haspel is accused of destroying evidence of torture conducted at the site.

In light of the news and articles pouring in regarding Haspel’s record in the CIA (which is thin due to the fact that she served the CIA mostly in an undercover capacity), there are some questions that need to be asked of her before she is confirmed as the new CIA chief:

1. Why did she destroy evidence of torture? If it was really that gruesome, is she the best person to lead the CIA since she could bring back harsh interrogation techniques?

2. Can she provide the CIA’s success rate when employing extreme torture techniques? How many times have CIA’s techniques actually resulted in prevention of an attack? As in the case of the movie Rendition, may times the CIA has weak or faulty evidence at best, yet they go ahead with the torture.

3. Are there black sites still in operation and what will she do to make them more transparent?

Holistically, I doubt Haspel will face any tough opposition in her bid to be confirmed as the new CIA director. Firstly, she is a woman and becoming the first woman director of the CIA reflects magnanimously on the United States’ establishment. Secondly, she is already second-in-command at the CIA and is the most natural choice to take the top spot. Thirdly, whatever methods she may have employed while running an alleged black site (alleged because with the CIA, you never know for sure), it was for her country. Lastly, the US has strong institutions. Everyone in power is accountable to the people and can be subject to questioning. Running the CIA will not be like running an opaque facility in some remote corner of the world. And most important of all, she has the support of her president.

As for the rest of the world, since Trump has come into power, he has gradually filled up his cabinet with people who are in line with his thinking. As such, Haspel is most likely a conservative hawk, who supports Trumps views of harsh justice against those who question his policies. Her appointment, however, will further undoubtedly hurt America’s standing amongst its friends and allies in the world.