If Nawaz Sharif wants PML-N to survive and win, he should go to jail 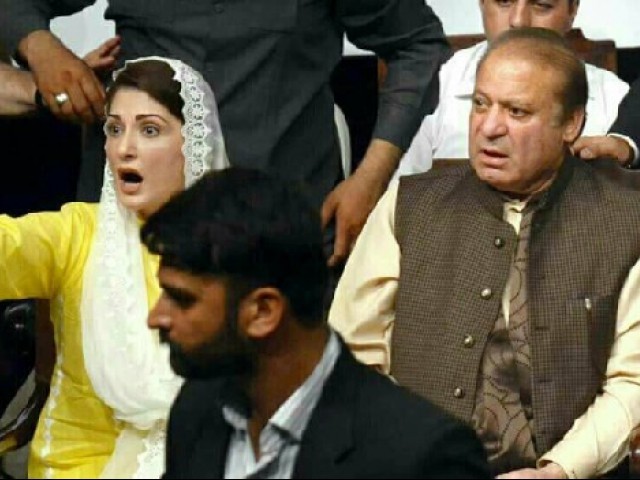 It will all be over if Nawaz and Maryam decide to stay in London. PHOTO: SCREENGRAB

The Avenfield verdict did not come as a surprise to anyone – after all, almost every informed person in the country knew that Nawaz Sharif and his daughter Maryam Nawaz would both be found guilty and indicted in this case. Strangely, Accountability Court Judge Muhammad Bashir mentioned in his decision that the National Accountability Bureau (NAB) was not able to prove any charges of corruption and money laundering on both the accused. On the contrary, the court actually gave a verdict on the basis of insufficient proof submitted by Nawaz and Maryam in their defence.

As per the decision, the accused were not able to prove their innocence, hence it was assumed they were guilty and had bought the property with black money. Interestingly, Maryam, who has never held any public office or political rank, was given a sentence merely on the basis of the doubt that she helped her father in concealing the truth and presenting forged documents.

Most of the accountability court verdict is based on assumptions, and has nothing to do with established proofs. In fact, the accountability court has set a new precedent by placing the onus of proof on the accused instead of the prosecution. This is the reason why prominent lawyers like Ali Ahmad Kurd and Salman Akram Raja have termed this decision a flawed one, and one having insufficient legal grounds.

But then there is the perception created by Imran Khan – with the support of the invisible forces – where Nawaz and his family are deemed responsible for every ill and problem the country is facing at the moment. Irrespective of whether this is right or wrong, a major chunk of the population strongly believes this narrative, which has only strengthened after this verdict. This has strong political implications, as Imran can now re-assert the narrative of Nawaz being corrupt and consequently win the natural vote bank of Punjab.

On the other hand, the Pakistan Muslim League-Nawaz (PML-N) cannot run an effective election campaign simply under the leadership of Shehbaz Sharif; neither is he capable of pulling large crowds and turning the support of the crowd into votes for the party. Shehbaz, in fact, is still playing the role of the good cop in hopes of getting something as compensation from the powers that be. However, it seems the good cop-bad cop strategy will not work for PML-N anymore, and if it has to survive, then Nawaz and Maryam will inevitably have to return to the country. Whether Nawaz chooses to remain in self-imposed exile or ends up returning to the country, as he says he will, will determine the fate of the PML-N in the upcoming General Elections as well as in the days to come.

Thus, Nawaz’s return to Pakistan will be the make or break point for PML-N, as he is the only one who has the narrative and the political acumen to challenge the status quo and rise against all odds. Currently, there exist two narratives: one developed by the invisible forces and endorsed by Imran; the other one created by Nawaz, focusing on civilian supremacy against the status quo powers responsible for the direct and indirect rule in Pakistan for past 70 years. There is an actual ongoing war between Nawaz and the powers that be, and for the past year, Nawaz has been facing the consequences and paying the price for standing up to the invisible forces. If he decides to return along with his daughter, he will definitely push the invisible forces on the back foot, as putting him and his daughter behind bars will not be an easy feat.

On the contrary, this will earn Nawaz the sympathy of voters in his fort of Punjab, and we all know that in Pakistan, the sympathy vote actually changes the entire picture of the electoral results. We have witnessed this formerly in the 2008 General Elections, when the Pakistan Peoples Party (PPP) emerged the winner after the assassination of Benazir Bhutto – all because the sympathy vote was in favour of the PPP. Thus, Nawaz has the golden opportunity to come back and face the courts. In the process, he should be sent to jail, as this will only make him and his daughter a symbol of resistance against the powers that be.

Unfortunately, you can never be sure of what Nawaz will do. He has missed the golden opportunity to be present in the court and create a historic moment as he witnessed a flawed verdict being delivered against him in person. Instead of showing up, Nawaz spent his time sitting in London, while ticket holders from his party were threatened and forced to change loyalties. Many of them eventually returned the party ticket, and yet Nawaz chose to stay out of politics and sat in London taking care of his ailing wife. After all, leaving Maryam in London to take care of ailing Kulsoom Nawaz was always an option.

Had Nawaz returned to Pakistan at the end of last month, things would have been entirely different. He could have easily managed the rifts within the party, and his presence would have saved PML-N from a large number of defections in South Punjab. It is the unpredictability of Nawaz that not only surprises his opponents, but also surprises his close aides as well. So even after witnessing his presser in London after the verdict where he confirmed his return to Pakistan, one can never say with conviction that he will really return to the country. The other question regarding his possible return emerges because he has still not confirmed a date of return, and has instead told the media he is waiting for Kulsoom’s health to improve in order to announce a date. A man of his experience should know better that politics does not wait for anyone; neither does it recognise human tragedy.

For now, everything depends on whether Nawaz and Maryam come back or not. The Avenfield verdict has not dented the vote bank of PML-N, as the voters are convinced Nawaz is being victimised. Clearly, all is not over yet for the PML-N and Nawaz, even after repeated verdicts against them.

However, it will all be over if Nawaz and Maryam decide to stay in London. This proves the fact that the career of a politician can never be finished through weak decisions by a court, as it is only the masses that make or break any political party or political figure through the ballot. Zulfiqar Ali Bhutto was hanged, but all efforts to eliminate his party were in vain. Same is the case here – if Nawaz chooses to face prison and other difficulties in his home country, no one can eliminate him from politics, neither can PML-N be thrown out of the political sphere.

The ball is in Nawaz’s court now: it is he whose decision will decide the fate of PML-N, not the Avenfield verdict.