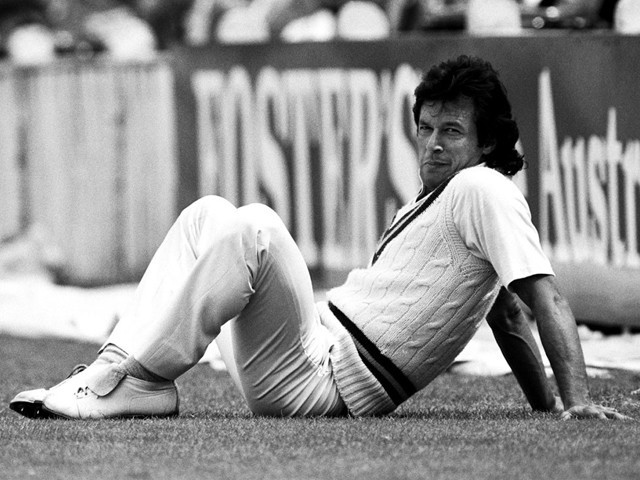 It’s been a long journey for Imran Khan. He founded his political party, Pakistan Tehreek-e-Insaf (PTI) in 1996, and for many years made no real progress. Many mocked him. The Guardian journalist Declan Walsh dismissed him as ‘a miserable politician’, whose ideas and affiliations had ‘swerved and skidded like a rickshaw in a rainshower’.

PTI did make a limited amount of progress in the 2013 General Elections, when it emerged as the second largest party by national vote and with 30 parliamentary seats. Furthermore, Imran’s party secured control of Khyber-Pakhtunkhwa (K-P). But none of this was enough to challenge for national power.

The outlook has changed dramatically over the past three months. The world needs to take seriously the prospect that Pakistan’s sporting idol and former Test cricket captain may be its next prime minister.

The Pakistan People’s Party (PPP), mired in complacency and corruption, is no longer a significant national force. Meanwhile, Pakistan Muslim League-Nawaz (PML-N), the ruling party, is facing a series of corruption charges after the Pakistan Supreme Court disqualified its leader Nawaz Sharif in the wake of investigations that followed the publication of the Panama Papers.

With only a month to go until the General Elections, the house of Sharif is rudderless and broken. Following the fall of Nawaz, it cannot even agree on a candidate to lead the party into the election. And it is accused of stashing huge sums of money abroad.

Imran has one further advantage. The 65-year-old has repeatedly presented himself as the virtuous outsider promising to clean up the endemic corruption of Pakistan’s politics. The enforced resignation of Nawaz is therefore seen as a profound vindication of Imran himself.

So when I drove up the hill to Imran’s elegant house overlooking Islamabad, I wasn’t going to visit a mere commentator on Pakistani politics. I was going to visit a man who could potentially transform this vast Muslim country, now home to more than 200 million people.

I started by asking him about US President Donald Trump’s recent announcement that he would send American troops back into Afghanistan and the accompanying threat that Pakistan ‘has much to lose by continuing to harbour terrorists’.

“It shows a concrete misunderstanding of the whole Afghan issue,” he told me.

He compared the current situation to Vietnam in the 70s, when the US blamed insurgents crossing the border from Cambodia for its failure to stamp out the Viet Cong.

“We all know what happened in Cambodia after that,” he said. “It’s very similar to what’s happening right now.”

The Taliban, Imran explained, is an ‘indigenous movement’ that cannot be dealt with by military force.

“For 16 years [the US] have been trying to use [the] military to crush the Taliban movement and it has failed. And it will fail again. This is just a recipe for a failed policy. What they’re doing now is just endless war.”

I then asked Imran about Trump’s plans to drop certain Obama-era requirements for conducting drone strikes, which could create an upsurge in attacks on Pakistani soil. While the Pakistani government has always publicly condemned US drone attacks as an infringement of its national sovereignty, a string of reports have cited evidence of tacit approval behind the scenes.

“We will not grant them permission,” he replied.

He said that he will stand up to the US, but Imran may have just as difficult a task standing up to his own armed forces, which have ruled Pakistan for almost half of its 70-year history and have exercised a strong influence when not in power.

Nawaz’s daughter, Maryam Nawaz, recently labelled Imran a mere pawn of the military. The Sharifs have recently fallen out with the armed forces and a common allegation against Imran is that he has become very close to the military establishment.

But he claimed he would not kowtow.

At this, we turned to his country’s convulsive domestic politics. To the detriment of traditional parties, radical groups with links to militancy and terrorism have been making remarkable inroads into electoral politics, most recently in last month’s Lahore by-election, where two hardliners together received 11% of the vote. So how comfortable is the PTI leader with the prospect of sharing a ballot paper with people who have been involved in violence?

“I think it’s alarming in the sense that the traditional religious parties have lost steam,” he said. “On the other hand, the beauty of democracy is – and this is what has happened to the other religious parties – that once you bring these guys into parliament, whatever they said before gets moderated. They move towards the centre.”

And what about blasphemy, the cause of dozens of murders, notably including of the former governor of Punjab? Many in the West see blasphemy laws as a blatant attack on freedom of speech, and critics within the country say that the laws lead to the persecution of minorities and the conviction of innocent people. Since 1990, at least 65 people accused of blasphemy have been murdered in Pakistan.

Nonetheless, Imran believes that doing away with the laws would only lead to more violence.

“I would never get rid of blasphemy legislation,” he said. “You know why? Because I would open the way for lynching mobs. If you accuse anyone of blasphemy, the other person has a right to prove that he’s innocent. But if you take that out, you will have, in villages, some religious cleric from a mosque instigating people. It’s happened to us. In Chitral [a district of K-P], suddenly [at] this one mosque, this guy claimed that someone had committed blasphemy and he riled the crowd up, and they were going to lynch him and the police saved him. So I think that it is a form of protection for people.”

Imran goes one step further, claiming that he would punish those found to have falsely accused others of blasphemy. He said that this is already happening in K-P, where 57 people are being tried after false accusations that student Mashal Khan had posted blasphemous content online in April which led to him being beaten and shot to death by a mob.

The issue of blasphemy is a symbol of what would be Imran’s overall approach to governing Pakistan. First and foremost, he intends to uphold the rule of law and strengthen independent institutions in order to create a more just society.

Some commentators have suggested that his support is divided across irreconcilable demographic lines. On the one hand, he depends on the backing of young, urban, secular-liberal, middle-class voters; on the other, on a more conservative, religiously-minded sector of the population. Once in power, it is thought, he could find it impossible to please both.

Imran has a simple response to that suggestion.

“With people voting in Pakistan today, it really is not that much of an issue whether someone is liberal or someone is conservative,” he said. “People want governance. If people vote for us, it won’t be about whether I’m liberal or conservative. It will be, who is going to tackle corruption.”

Apart from this, what is Imran’s political vision? In some ways, it’s not unlike Jeremy Corbyn’s.

“I don’t care what anyone says,” Imran told me. “I think he’s a genuine leader. You know, he has a belief system.”

Like Corbyn, Imran believes in taxing the rich and investing heavily in health and education.

“There are two things which I feel my party has in common with him,” Imran said. “He believes in social justice, economic justice. And secondly, his foreign policy is much more just.”

So is Imran going to win?

“You know, you’re asking a sportsman who’s going to go and play a match whether he’s going to win or lose,” he replied. “Of course I say I am going to win.”

The world should no longer see Imran as merely a former Test cricketer. It needs to look at him very seriously as a potential leader of Pakistan who can project his country onto the world stage. He could become Pakistan’s most recognisable leader since Zulfikar Ali Bhutto 40 years ago, mobilising a mass movement and articulating a fresh political vision.

But the world should also bear in mind one thing: although he is instantly recognisable in the West, and fits the westernised mould of Zulfiqar and his daughter Benazir Bhutto, many of Imran’s messages – whether over drones and military intervention or on the position of religion in society – may be painful to some western ears.

The author is a Daily Mail columnist. He tweets @OborneTweets (twitter.com/OborneTweets)