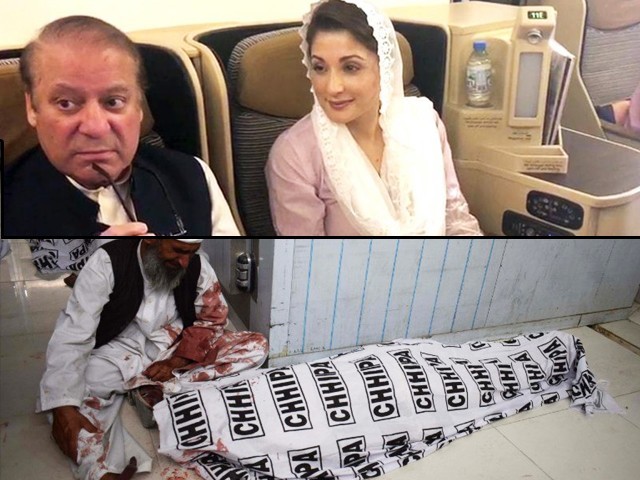 The anti-climactic landing of deposed premier Nawaz Sharif in Lahore stood in strong contrast to the scores of supporters usurping the provincial capital in order to welcome him. Funnily enough, none of the leaders of the Pakistan Muslim League-Nawaz (PML-N) made it to the airport, or even near it. Their entire show of power to ‘welcome’ Nawaz was solely to flaunt their supporters and exhibit to the country that PML-N still holds strength in Punjab.

Nawaz and daughter Maryam Nawaz both arrived in Lahore at around 8:48pm last night, and videos from fellow passengers were being played on repeat on every news channel across the country. In the while it took Nawaz to exit the plane and get through immigration, the death toll in the deadly suicide attack in Balochistan’s Mastung rose by 20. However, no news channel felt that Mastung’s tragedy deserved more coverage than Nawaz’s arrival.

While this isn’t a competition of priority, one would believe that instead of running ‘live’ feeds of the Etihad flight that carried the father-daughter duo from Abu Dhabi, TV channels would prioritise the Mastung massacre. Unfortunately, a convicted politician and his glorification of “jail time” trumped the scores of dead being counted in Balochistan.

Honestly, the incident left a gaping hole in my heart. To hear of the Bannu attack in the morning and hours later, learn that a Provincial Assembly candidate was among the hundreds martyred, reminds us of the tragic death of Awami National Party’s (ANP) Haroon Bilour in Khyber Pakhtunkhwa (K-P) only earlier this week. Three separate attacks on three different candidates – resulting in the death of two out of three – shows the deteriorating security situation in the country.

And honestly, what was PML-N’s hue and cry all about? The ‘illegal’ rally led by PML-N President Shehbaz Sharif, despite multiple prohibitions and warnings from the caretaker set-up in the province, surprised me! There was no chance the rally was ever going to be allowed to reach the airport; the federal and provincial governments would never have allowed such a crowd to enter the airport while such high profile political leaders were arriving. The risk was too big.

The aforementioned attacks have been claimed by the deadly Islamic State (IS) and Tehreek-e-Taliban Pakistan (TTP). When we have seen from our own eyes that the attackers could be hidden anywhere amidst the scores of supporters, extra caution needs to be practiced.

With Hamza Shehbaz driving the lead vehicle, Shehbaz spoke to media personnel from the window of his car, ensuring them that the PML-N will support and welcome the man who granted the country nuclear power and the person who initiated the China-Pakistan Economic Corridor (CPEC); the routine PML-N chants of Nawaz’s good deeds. The image of Hamza and Shehbaz leading a rally while Maryam and Nawaz come back to serve their sentence also shows the power transfer within the party. Whereas a couple of months ago the country thought Nawaz and Maryam were the future of the party, the trend seems to now be tilting towards the younger Sharif brother and his son.

To ensure flawless security measures, the National Accountability Bureau (NAB) requested exemption from producing the accused in court last night for them to begin their sentence. The accountability court accepted their plea and directed the bureau officials to transport them to jail directly. Maryam was placed in Sihala house for her medical and was then shifted to the women barracks in Adiala, and Nawaz spent the night in jail as well.

I gather from reliable sources that the two have ACs in their jail cells, two helpers each, and all luxuries provided for while being held in the Category B jail cells. As a deposed three-time prime minister, Nawaz will be given top priority and will be provided with all luxuries possible (well, only the wealthy can enjoy TV and ACs in jail).

Interestingly, the last time Nawaz was behind bars, he went into self-exile and emerged much, much stronger. Makes me feel that maybe this time, the bars will be in Maryam’s favour, as the country locks its eyes on the PML-N leaders in Rawalpindi’s jail.