Is Maryam Nawaz gearing up to be the next prime minister of Pakistan? 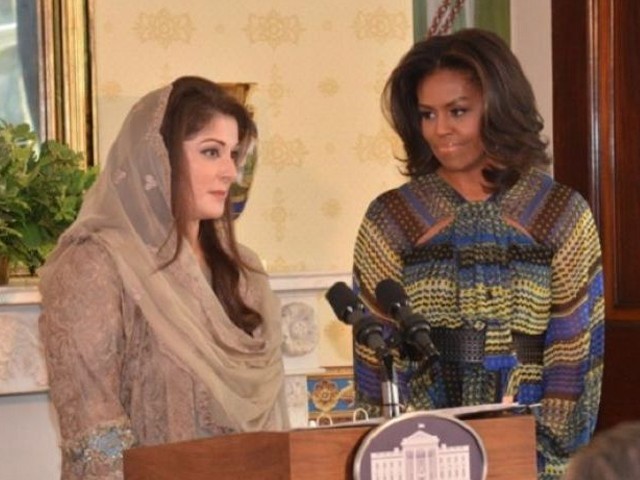 On October 22nd, the former US First Lady and current Secretary of State, Hillary Clinton, survived an 11-hour long congressional hearing pushing her closer to the Oval Office. The same day, Justin Trudeau, the son of former Canadian Premier, Pierre Trudeau, began his takeover of power in Ottawa, Canada. On that very day, just shy of her 42nd birthday, another political heir made her global debut standing next to Michelle Obama in the eastern wing of the White House.

This woman is Maryam Nawaz, the daughter of Pakistan’s incumbent third time Prime Minister, Nawaz Sharif, who has announced a commitment to educate more girls in her country. The fact that Maryam accompanied her father to his US trip seems to be a sign that she is being groomed as the second generation leader of the Sharif political dynasty, one of the two most powerful dynasties in the world’s sixth largest democracy alongside the Bhutto clan. The Twitter savvy Maryam had already been showing signs of influence in Pakistani politics, but her trip to the states is the most evident sign yet of her inevitable succession to the Sharif throne.

Arrived in Washington to see this note by the First Lady Michelle Obama. Beautiful gesture ! pic.twitter.com/e3q0uZGG7l

Thank you @BarackObama & @MichelleObama for your wonderful hospitality. pic.twitter.com/43gYWGoTyH

FLOTUS:With this funding we’re going to be building more than a dozen schools and rehabilitating hundreds of others pic.twitter.com/y2TGIyQZ1j

Akin to movie sequels, celebrities or major brands, political dynasties in Pakistan, like elsewhere in the world, enjoy recognition, wealth and connections essential to their survival and domination. In Pakistan, these families have substantial influence. Before Nawaz, Pakistan was in the hands of Asif Ali Zardari, the widower of former Prime Minister Benazir Bhutto, who herself was the daughter of Zulfiqar Ali Bhutto who ruled the country for much of the 70s. Nawaz, a wealthy businessman, governed Pakistan twice in the 90s before coming to power again in 2013. His younger brother, Shahbaz Sharif, has been in control of Pakistan’s largest province since 2008 while his nephew, Hamza Shahbaz Sharif, has a seat in the parliament.

Bhutto’s and Sharif’s are not the only blue bloods in Pakistan. Out of Pakistan’s nine largest political parties, six have clear affiliation with a dynastic family. This means that unlike Hillary Clinton or Justin Trudeau, these political scions inherit their party leaderships, hence making these political fronts essentially an extension of the family’s personal wealth and prestige. It is a fact, which makes any sense of accountability of these families within these political parties improbable, if not out rightly impossible.

Then there are the smaller families, usually which have influence in specific parliamentary constituencies. A 2013 research found that approximately 44 per cent of all outgoing legislators in Pakistan were related to individuals who had served in previous legislative tenures. This is usually due to a relationship between the larger and smaller political dynasties. This mutually beneficial relationship is based on mutual support aimed at a control of absolute political power. These smaller political dynasties often change their allegiance depending on the public opinion of their constituents – this political fluidity prevents any meaningful political change in the country.

So is there any benefit of having these dynastic families? For one, in a conservative society like Pakistan, women belonging to these families may find it easier to achieve political power, in case of Benazir Bhutto – who if not for her father probably would not have become the prime minister. Perhaps Pakistan might get another female premier in the form of Maryam Nawaz in the future. But this creates an illusion of greater gender equality while the reality for the society at large remains bleak.

If moving from one dynasty to another is considered democracy, then Pakistan is the most democratic nation in the world.

With the grooming of a clear successor of Pakistan’s largest political party, the country can expect to remain under the influence of these dynasties. These dynastic families have become an inescapable part of Pakistan’s political culture. They are keeping up the facade of democracy while maintaining the privilege of a monarchy.

The author is an activist who runs the Center for Youth Activism of Pakistan, he is also a student of global development at the University of London. He tweets as @shahrukhwani (twitter.com/shahrukhwani).