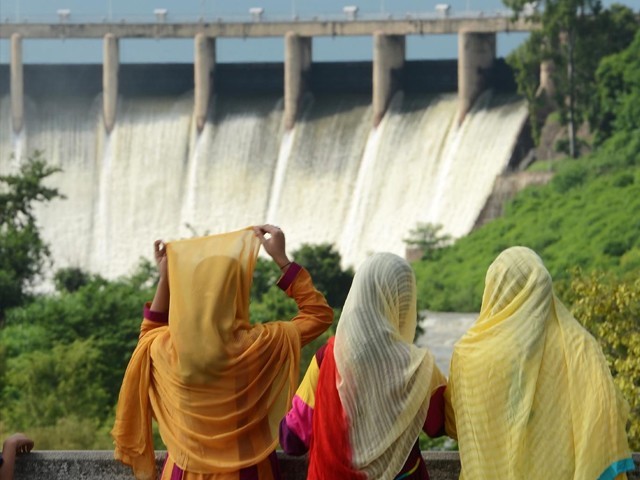 A Pakistani family looks at the Rawal dam spill way during the Eid holidays in Islamabad on August 10, 2013. PHOTO: AFP

A few days back, my views on the futility of Kalabagh Dam published in a national daily evoked a very strong and hostile reaction from many people. I had posed a simple and pertinent question:

“If, as is evident, Pakistan will have very little water in future, what will we fill Kalabagh Dam with?”

Some people said Pakistan will have enough water forever, while others called me an enemy agent. Before delving deeper into why the dam should not be constructed, I would like to share my own experience of water consumption.

Up until 10 years back, I had no idea how much water my family was using, nor was I bothered when I saw it being wasted. This was because the Karachi Water and Sewerage Board (KWSB) charges domestic consumers a fixed amount every month, irrespective of consumption, based upon the floor area of each house. So a large house owner has to pay much more than a small apartment owner, even if only two people live in the large house and the small house has 10 occupants.

However, when I moved into my present apartment (where a meter records water consumption), I found that on an average, each member of my family was consuming 50 gallons daily (including water used for bathing and washing clothes and dishes). During the hot summer months, my water bill shoots up to Rs15,000 a month. This is because water is either obtained from tankers or from a reverse-osmosis plant set up near my apartment block to supply water to 720 apartments.

So, when I read about Pakistan running out of water in the next few years due to receding glaciers and highly reduced rain due to global warming, as well as the diversion of our water by India, I thought it would be good if our people could be compelled to save water. One way of doing that would of course be to make people pay for actual consumption, rather than recover a fixed amount based on the space occupied by their houses. Of course, most of the water of our rivers is consumed for agriculture, so it is essential to train farmers to reduce wastage of water.

A lot of people argue that Kalabagh Dam is the answer to all our water-related problems. My arguments against building it stem from many statistics and examples available to me. It has been known for a long time that huge dams cause great environmental damage, besides being very expensive and construction requiring a very long time. For example, even though the foundation stone of the $11 billion Diamer Bhasha Dam was laid in 2011, but construction has not yet started.

Besides contributing to global warming, dams have resulted in the decimation of fish species, displacement of people, desertification of areas near the coast, and changing the ecology of the planet by trapping sediment which is needed by deltas to support vegetation. The intrusion of the sea and destruction of agricultural land in lower Sindh is a direct result of dams and hydropower projects upstream.

According to International Rivers:

“The livelihoods of many millions of people also suffer because of the downstream effects of dams: the loss of fisheries, contaminated water, decreased amounts of water and a reduction in the fertility of farmlands and forests due to the loss of natural fertilisers and irrigation in seasonal floods. Dams also spread waterborne diseases such as malaria, leishmaniasis and schistosomiasis. Opponents also believe that the benefits of dams have frequently been deliberately exaggerated and that the services they provide could be provided by other more efficient and sustainable means.”

It should be obvious that another huge dam upstream would deal a death blow to Sindh.

One argument in favour of large dams is that hydropower is much cheaper than other conventional options available. But I’d like to argue that the cost of electricity from solar cells has reduced considerably in recent years and is expected to be lower in future and this could be used instead. Moreover, even though hydropower is very cheap, the opportunity cost of it is a lot higher.

“Hydropower should not be considered as clean power because of the destruction of river ecosystems and its many social impacts. Internationally, private investors in power projects are largely avoiding large dams and prefer to invest in cheaper and less risky gas-fired power plants.”

In fact, about 1,000 dams are being dismantled in the US to restore rivers to their original pristine condition.

Gradually, electricity from solar panels is becoming popular. In future, most houses, farms and factories will be able to produce virtually free electricity.

Not only is this a criminal wastage of water, sugar is one commodity which we should learn to use economically. It’s bad for health, it requires an immense amount of storage, and it is highly subsidised. It therefore has a negative impact on the Gross Domestic Product (GDP); it actually makes the country poorer.

Instead of providing so much subsidy and other benefits for sugar production, the government should provide the same facilities for growth of valuable crops like canola, sunflower and other edible crops. Unfortunately, this seems to be a lost cause as a lot of politics is involved here. Most of our filthy rich politicians are sugar mill owners, who get bank loans written off and pay very little tax. They are, of course, able to do this because they are in the Parliament and they decide how much tax we should pay (while paying negligible amount of taxes themselves).

Moreover, our farmers should take up drip irrigation, which can raise production significantly using the same quantity of water. Israel is the pioneer in this field, and in India,it has been adopted successfully in many states, resulting in saving water for more irrigation.

Singapore, Kuwait, Saudi Arabia and other Gulf countries rely completely on sea water desalination plants for providing water for drinking and agriculture. Why not try this in Pakistan? Initially, sufficient water for Karachi and coastal areas can be produced by setting up large desalination plants. Later, such plants can be built to provide water for agriculture. The face of Sindh and Balochistan will be changed forever, providing livelihood and food for the poor and impoverished people.

Hence, those who are insisting on making Kalabagh Dam should consider that besides measures to reduce water wastage, there are cheaper alternatives available worldwide to produce electricity and water. The Kalabagh Dam will only leave a huge debt for future generations, besides doing irreversible damage to the environment.