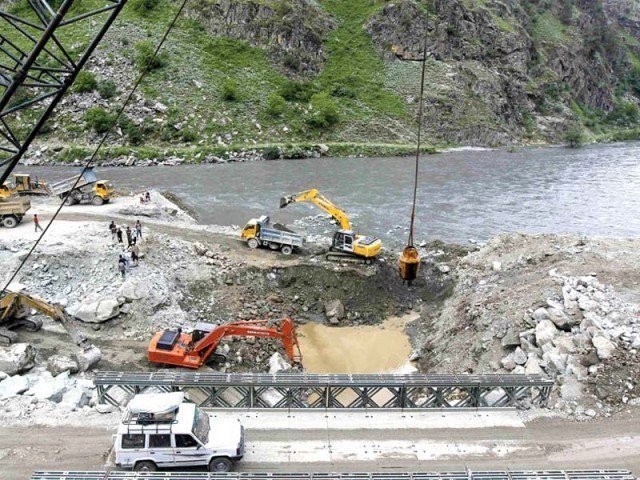 A private vehicle crosses a bridge as excavators are used at the dam site of Kishanganga power project in Gurez, 160 kilometres north of Srinagar. PHOTO: REUTERS

The Indo-Pak relationship has become a byword and a cautionary tale in what nation states must not do when interacting with one another. Whether it is the complex Kashmir issue, cross-border terror, trade issues, the China-Pakistan Economic Corridor (CPEC), or even the allegedly “low hanging” and easily resolvable issues of Siachen and Sir Creek, the two countries have been unable to come to terms.

In the backdrop of failed agreements, lost opportunities and active sabotage of attempted détentes, one instance of cooperation on a critical issue bucks this trend, and that is the Indus Waters Treaty (IWT).

The treaty was signed in 1960 and has withstood the test of time, including three major wars. According to the treaty, India gained full control of the eastern rivers of the Indus system and their tributaries, while Pakistan gained full control of the western rivers. Thus, while India could use the waters of its rivers in any way it liked and divert them, it could not divert the waters of the western rivers over which Pakistan had control.

According to the treaty, however, India can use the western rivers for constructing run-of-the-river dams to generate electricity. The treaty does not stipulate any limit on the number of such dams India can build, and consequently, especially in the last couple of decades, India has made use of this provision by building a number of dams on the western rivers. The pace with which India has built these dams has made Pakistan anxious and insecure of India’s intentions. Pakistan has raised an objection to several dams India has built or is in the process of building by questioning the technical details of the dams, since the IWT lays down guidelines India has to follow in this regard.

One such dam Pakistan has had an objection to is the 330 megawatt (MW) Kishanganga Hydroelectric Project that was inaugurated by Narendra Modi this month. The project was objected to by Pakistan because it diverted water from the Kishanganga River (called the Neelum River in Pakistan) to the Jhelum river, which it is a tributary of. Construction was halted in 2011 when Pakistan took the matter to the Hague Court of Permanent Arbitration, but resumed when the court declared India could divert the waters, provided it maintained a certain level of flow in the Kishanganga River for environmental purposes.

India was allowed to divert the flow because the Kishanganga is a tributary of the Jhelum and water was not being diverted out of the Jhelum’s flow. Meanwhile, Pakistan alleges that by diverting some of the flow of the Kishanganga to the Jhelum prematurely, India is affecting Pakistan’s 900MW Neelum-Jhelum Project on the same river downstream.

Pakistan’s growing insecurity with respect to India’s plans on the western rivers is understandable, and it is compounded by its adversarial relationship with India as well as its chronic water shortages. Its per capita water availability has reduced from 5,300 cubic metres in 1947 to less than 1,000 cubic metres today, making it among the world’s most water stressed countries. Pakistan has faced much criticism from its citizens for not doing enough to utilise its water resources adequately, as decades have passed by without adequate improvements in its storage capacity. Silting is depleting the capacity of existing dams, while other dams have been delayed for several reasons, worsening the per capita water availability. Thus, while it is clear why Pakistan is raising concerns regarding the Kishanganga project, the country also has to focus on taking active steps to improve its own water management, conservation and policy.

In India, on the other hand, the chances of viewing Pakistan’s concerns with empathy have reduced significantly with the rise of tensions that continue to spill over to other issues, including water. Indeed, recently Modi linked terror with water saying,

“Blood and water cannot flow together.”

This may have been the first time an Indian premier linked the two together so categorically, and there were fears India may even disregard the IWT. Even though those fears were premature and subsequently allayed, clearly the only enduring agreement between the two countries is also not as secure as it used to be. Linking terror and water in this manner goes to show the two countries have not built any bridges to foster trust and cooperation, and that India sees water as the only major leverage it possesses over Pakistan, since the two states have not invested in each other’s progress. Modi’s inauguration of the Kishanganga project despite Pakistan’s protests to the World Bank, and India barely taking cognisance of the protest, seems to suggest positions have hardened further.

What Pakistan will have to consider is that the treaty is the most generous water sharing treaty on earth. It allocates 80% of the Indus system’s waters to Pakistan. Despite Pakistan’s protests against dams built by India, neutral international courts have, by and large, sided with India’s position and have allowed construction of these dams, as they are within the purview of the treaty. With the treaty being as generous as it is, the voices in Pakistan that want to do away with it or alter it because it allows India to build these dams, may want to reconsider. Any revision may well allocate more water to India than the treaty presently does.

Despite wars and the recent rhetoric from the Indian premier no less, India has abided by the treaty for 58 years. With media attention largely on India’s alleged infractions of the treaty, chances are Pakistan may lose focus of its own measures and policies as far as water debates are concerned. For its part, India must see that while its concerns of cross-border terror pertain to the Pakistani state, water is a question that concerns all Pakistani people, and must therefore treat Pakistan’s concerns in a less cavalier manner.

Water is the most critical issue between the two countries and we have been fortunate that despite odds, a treaty has been in operation that has worked for the most part. But with the two countries facing new demand and supply challenges, such as rising populations and receding glaciers, it is essential to build trust and empathy to facilitate cooperation. In a better world, better relations and electricity agreements may have meant that the Kishanganga issue would have been a non-starter. In this world, we have to hope that hardened positions on both sides don’t lead to Kishanganga-like disputes continuing to sour an already sour relationship.