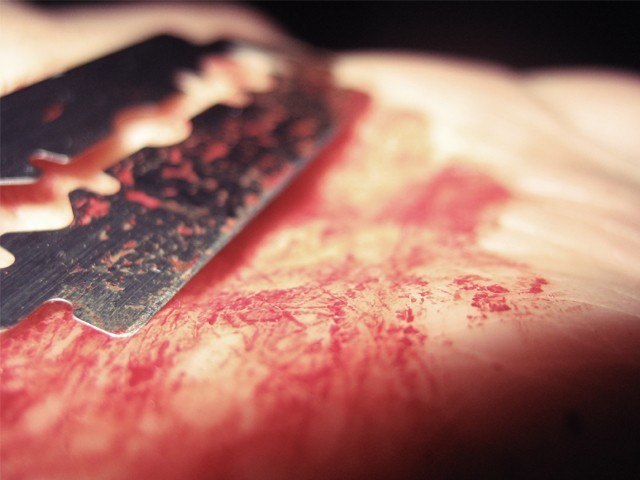 Haider sat on the bathroom’s floor, with a blade in one hand. PHOTO: SHUTTERSHOCK

The sun was ablaze in an empty blue sky. The city glazed in the dazzling sunshine was bright and yellow and alive. Amal lay supine under the sun, her skin covered in a shimmer of sweat. Today, after work, she didn’t go home. Instead, she came to a park near her workplace.

Children and the elderly loitered in the park. Pedestrians skittered and scuttled on the sidewalks. The roads around bustled with cars. All people moved to the ends of their journeys, while Amal was sprawled unmoving on the ground.

The sky was taking on a cherry tint. The sun was disappearing into the sky.

The park filled in with more people. Some noticed Amal lying lifelessly on the prickly grass, in the sweltering heat.

A few asked her if she was fine, a few looked at her with curious eyes, the rest simply ignored her. Amal was deaf to their words, and to their silence. She kept looking towards the sky, her eyes hollow, and her face pale.

She closed her eyes.

When she opened them again, they were watery with tears. She wiped them with the back of her hand and got up to leave. She had been here too long.

Streetlights glowed along the wide roads that led to her house. She weaved her way through several streets before she finally reached her destination.

Her house was big and stood in the middle of huge green gardens. Its white walls flushed pink as the sunset became more poignant.

Amal gazed at the house with empty hazel eyes. A little while later, she drove away.

Haider sat on the bathroom’s floor, with a blade in one hand. ‘Cut, cut, cut’ the voices in his head were louder than any he had ever heard.

He made the first cut on his arm. Scarlet blood dribbled down on the white tiles of the bathroom floor.

He made a few more cuts.

By the time he was done, the white bathroom floor was red with blood.

He smiled broadly when he looked at his arm. The words “they’re all liars” were finely carved into the soft flesh. His eyes glimmered with satisfaction.

He rolled down the sleeve, and got out of the bathroom.

On one wall of his room hung a picture of him with his parents. He took it off from there and threw it on the floor.

Then he got into bed, and fell asleep.

That night, he dreamed that Amal and Farid were his real parents. He dreamed of a lie, that he wanted to be true. When he woke up in the morning, his other arm tingled lightly.

It was time again.

The sky was unadorned without the stars and the moon; it was black like coal.

Farid’s house emerged. It stood still and silent in an empty corner of the city.

Amal gathered her courage and rang the bell. A little while later, she was sitting across from Farid in his living room.

Amal and Farid got married 25 years ago. It was an arranged marriage that failed miserably.

Farid treated Amal nicely in the beginning. But as time passed by, he grew vile. He started coming home late, and mostly drunk. The abuse started then.

When Amal couldn’t conceive, he beat her unconscious. Some scars from the abuse Farid inflicted on Amal still lingered on her body.

Some years into the marriage, they adopted a baby boy and named him Haider. Amal thought it was the beginning of something new, of something better. But she was wrong. Farid was still the same man, still hurtful to her.

Almost a decade later, Amal took a divorce from Farid. Fortunately, Farid let her and Haider be in the same house and settled in a different house himself. The household expenses had to be taken care of, and so Amal started working.

This time, it really was the beginning of something new. Life without an abusive husband was good. Until yesterday.

Amal heaved with sobs, purging from deep within her. When she talked, her voice came out in frail whispers.

“The truth we’ve been hiding from him.”

“Mother came over last night. We were talking. He overheard us.”

Farid’s face was ashen. He was bitterly hurt.

That night Amal didn’t return home. She stayed back with Farid and drank till she passed out.

In the morning, events of the past day fuzzed in her mind.

She wondered why life was being so unfair to her.

Haider was sitting alone on the dining table, eating his favourite cereal when Amal returned home with Farid.

Seeing them together amused him. ‘They’re here to tell me more lies’, he thought

“Haider, darling! I know you’re upset with us. But you weren’t supposed to know,” Amal said in her papery thin voice.

“You know, I really loved you both, like you were my own parents, because obviously I didn’t know that you weren’t. When Baba left home, I was devastated. I couldn’t move on. It took me years to forget what happened, and just when I did, I learned that the man I cried for every night isn’t my father, and the woman I loved so dearly isn’t my mother,” Haider said quietly.

“Haider, we know we should’ve told you. We made a mistake, and we want you to forgive us,” Farid intoned softly.

Haider stared at them blankly.

A few moments later, Amal hugged him tightly, and Haider hugged her back.

“You are my parents, and I’m your son,” he said feebly. Tears pooled in the corners of his eyes.

Amal and Farid were relieved. A huge burden was lifted off their shoulders. They thought Haider won’t forgive them, and won’t ever accept them as his parents.

At night, when Haider was back in his room, he took out a blade from his drawer.

Cut, cut, cut, the voices in his head were echoing again.

This time he made the cuts on his thigh.

“They’re not my parents.”

The words glistened red on his thigh. Haider’s lips curled into a smile. He felt oddly satisfied, seeing himself bleed.