How I found true love in an arranged marriage 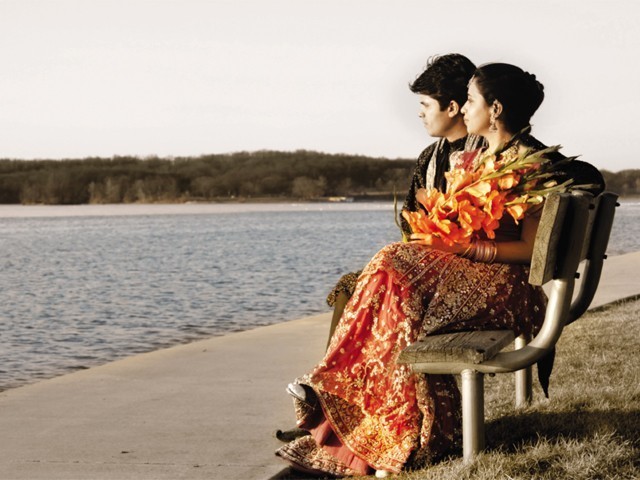 He courted me for three months before we got married, in a dowry-free marriage. PHOTO: EXPRESS TRIBUNE MAGAZINE

Last week, we celebrated our sixth wedding anniversary. Ours was an arranged marriage, and I had not even seen his picture before saying yes to him. Sounds so backwards, right?

I didn’t see his picture because I didn’t care to see, as I was already besotted by him when I began to talk to him on the phone and chatting with him over emails.

It was the beginning of 2009. I was on holiday with my friend in Manipur without informing my parents. I called my sister at the hour of departure and told her I was leaving for a four-day holiday in Manipur with my friend. Before she could say anything, I switched off my phone and sat on the ATR that took off from Kolkata.

Within this short trip, I intended to leave behind the emotional bruises of a failed relationship and also to get some relief from the mounting pressure of arranged marriage that had been dangling over my head.

For the past five years, my papa brought proposals to me for marriage, and I somehow couldn’t seem to settle down with any of them. I would talk to them, once or multiple times, depending on my interest, but none of them fit well in my vision of a life partner.

It was difficult to explain this concept of my kind of life partner to my increasingly restless parents, but I was determined to not give in to their irrational demands. I knew I would rather stay single and stay abroad than marry someone against my wishes. Coming to Manipur was an impulsive decision to gain some sanity.

I didn’t know the devil of arranged marriage would follow me up there, where the phone caught signal once every 10 minutes. But you see, parents find a way to get to you.

I was trying to call my bestie from Manipur, and was haggling with the intermittent network, when I saw my phone beeping, Papa calling. It sent chills down my spine, but as a matter of family rules, I answered the call. What I heard from the other end was more than enough to spoil my vacation.

Papa had given my number to a prospective match who might call me anytime. I was now on an alert, and since I couldn’t hate Papa, I hated this prospect who could call me. Couldn’t he give a set date and time?

Thankfully, the phone call never came, but a month later, an email arrived on Valentine’s Day.

The sender had politely asked me to be his friend, and while he told me about himself in concise 10 sentences. He asked me if I wanted to change him.

As a thoughtful reply, I wrote to him in detail that I was a spontaneous and happy-go-lucky girl who was seeking love, chemistry, mutual understanding and a spark. This probably didn’t answer his questions, so he called me the next day.

“I sent you an email but you didn’t reply,” he questioned.

“You sent an email but it was not the reply to my questions. They remained unanswered,” he argued.

I didn’t know what to say, except that I thought he was an extremely arrogant man, highly egoistic and displaying great superiority complex of his job.

I didn’t want to carry on with the conversation, but I did because I knew I would have to answer Papa after the call.

We talked, and he spoke about his life, his personality and he confessed this was the first call he ever made to a girl. At the end of that hour-long conversation, he admitted that he had never spoken to any woman for that long.

“Sadly, no. I lost her when I was 14, which was five years after my father’s death.”

I was quiet, speechless and spellbound. This explains his maturity. He didn’t carry a phone, which is why he couldn’t give a set date and time to call.

This explained why he asked me if I wanted to bring about any change in him. He wanted to be accepted the way he is, and he brutally presents himself in his purest form to people.

“I do not have any bank balance or property but I have immense love to give. I have always held onto this love and I now want to love someone to the best of my capacity,” he said in one of the following conversations.

Is he a part of me? How else could he know that I was seeking somebody who could love me to the best of his abilities? How could he learn that I didn’t need money or wealth or property, but a sound character and true, pure love?

One phone call led to another and one email gave way to a chain of emails. We shared views, opinions and feelings.

We discussed the hypocrisies of society and we planned for a happier future.

But I had not seen his picture while he had seen plenty of mine. My social networks were rife with images of my vacations, friends and family, and he was completely absent from Google.

One day Papa asked me,

“How is it going with him? Did he say he is ready to marry you?”

“No. He hinted at it but he hasn’t said it explicitly,” I replied.

That night he specifically mentioned marrying me, and I asked him to talk to Papa. He called Papa and only said,

Papa was a little confused and asked,

“Thank you for what?”

“Thank you for sending Surabhi in my life. I want to marry her.”

Next day, we were off to his training centre in Mussoorie to carry out a small, formal family tradition of roka.

My heart thumped heavily on those curvy, snaky uphill roads. What if I don’t like him physically? What if he had chubby cheeks? What if he was too fair? My mind was bombarding my heart with questions, and my heart replied to each question with a quick heartbeat.

I knew he had worked in the Indian Air Force for 10 years, so I was assured he possessed a well rugged body, but body wasn’t enough. I had to like his face. I wanted to see kindness in his eyes and an innocent, compassionate face.

Finally, the moment arrived. He was waiting outside his training centre to receive us. From the rear window of the car, I glanced at him. Standing around five feet and eight inches tall, he looked decent and handsome. A sharp nose, petite eyes and a broad jaw primarily defined his facial features. Behind those glasses, I could see purity in his eyes.

His well combed, oily hair was a bit of a turn off, and so was his old patterned shirt, but I chose to dive deeper into his disposition that was charming on the phone and now charismatic in person.

We met, shook hands and he gifted me a rose bud.

“My eternal love is yours now,” he said.

Now that we are happily and crazily married (we fight 10 times a week), I can see how an arranged marriage system came to my rescue when I was failing at taking charge of my life.

After brief stints of attempting to find love, I gave up. I realised that maybe I was not destined to get married and that my kind of love does not exist in the world. My kind of love is slightly possessive, but overtly giving. It comprises more of shared laughs and dreams and less of gifts and services.

My love is about me and my happiness, and my lover should be okay with it. But this is where I faltered. How can a person love you without demanding a bit of happiness for himself?

In my kind of love, I don’t give happiness to him. He must derive it from mine, and how and where would I find such a person? Who would love me the way I want to be loved? Who would take the risk and eventually have a core belief that once he loves me, I will ultimately give all of myself to him?

Had I met him on any random occasion, I am sure I wouldn’t have continued talking to him after five minutes.

It was the pressure (and the liberty) of an arranged marriage system to talk to him that helped me in knowing him further beyond those superficial, materialistic aspects. I am thankful for the fact that Papa insisted I talk to him. It is an added advantage that Papa had done all the background checks by himself, and that there were no chances of being cheated.

The best part is that Papa admired him instantly when he met him for the first time. Papa was so sure of his choice that he knew this guy would sweep me off my feet – he was so right.

He courted me for three months before we got married, in a dowry-free marriage. I did not think twice about not utilising my Bradford MBA and I quit my business analyst job with a MNC to settle down with him in the pristine and remote islands of Andaman and Nicobar Islands.

Soon, I picked up blogging, but more on that later.

As of now, I’m going to go celebrate my anniversary.

Surabhi Surendra is MBA from Bradford University, UK. She quit her job with MNC to settle down with her family in the remote islands of Andamans. She now chronicles her journey of life on her blog Womanatics (www.womanatics.com/). She tweets as @womanatics.