For the West, Malala fits the image of Pakistan but Edhi does not 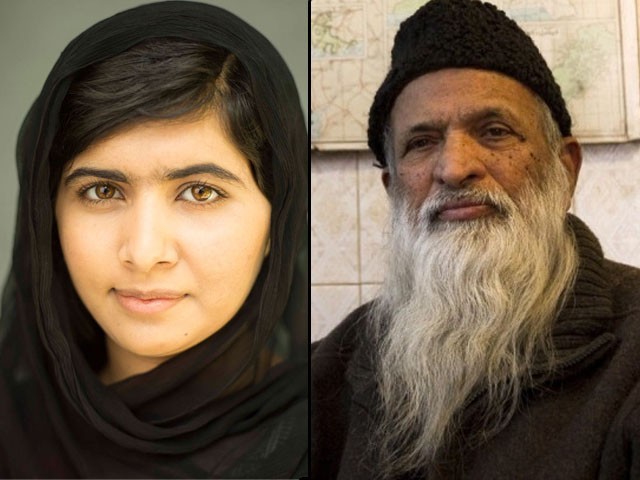 In this moment, Malala deserves the peace prize but so does Abdus Satter Edhi.

Let me begin by saying that I like Malala Yousafzai – she is courageous, authentic and has great conviction. But a couple of questions keep dwelling in my mind; why does the West like her so much? What is her appeal to them? And along with these questions dwells the answer as well, which is quite simple; the West is courting her because she represents a side of Pakistan and Islam that suits them.

By suggesting this, I am not trying to imply that Malala doesn’t deserve her accolades; she represents hope, valour, defiance and the image of a strong girl hailing from third world Pakistan.

She fought her battle with strength, no doubt, but does the west propagate her for that reason alone or is there something else?

Since the announcement of the shared Noble Prize for Peace by Malala and Kailash Satyarthi, I have read countless articles, social media updates, Facebook squabbles, tweets and drawing room discussions on, “why Malala and why not Edhi?”.

My humble opinion: Abdul Sattar Edhi is the most deserving Pakistani for this award, he should have been given the Noble Peace Prize decades ago, much before Barack Obama and Yasser Arafat. However, we must appreciate the veracity that this is a political award and is not always awarded to the most deserving of candidates.

The Nobel Peace Prize is more image-driven rather than personality-driven, and currently it is more about what the west wants to see and project about Pakistan rather than anything else. At the risk of playing the devil’s advocate, should the award not be awarded on the impact of what the recipient may have done for their country rather than what the West perceives it to be?

The fact remains that, by comparing Edhi and Malala, we not only simplify and belittle her cause and treacherous journey – which by all accounts is tremendous – but also play into the dangerous game presented to us by the West where the media continually implies that eastern societies thrive on the oppression of women and female children. Rampant, heinous and vulgar it may sound, yes, but for the most part, it is true.

What is it that the West likes about Malala that they do not like about Edhi?

Malala epitomises the image of Pakistan that the West likes; an oppressed poster girl child who stood against all odds to change the system and raised a voice to fight for her rights and the rights of young girls like herself against her oppressors.

On the flip side, who is Edhi? What does he stand for? What are his achievements? What is it that his image can do for the west? How is his persona going to represent humanity and human rights in the third world? What impact will it have on the people viewing Islam and Pakistan from the outside?

Edhi’s contribution to strife-ridden Pakistan is immeasurable, and the impact of his charity to the rest of the world is unfathomable. Tattered, poor and violent, Edhi’s Pakistan has catered to billions of victims; orphans, injured, hungry, homeless, abandoned, abused, dead and raped, for more than half a century, all because of a man named Edhi. When no one is there he is, and at times he’s the only one there, but his bearded, topi-pajama-kurta image and dark spot on his forehead does not fit the image of the Pakistan that the West wants to project. The only white bearded man the West likes is Santa Clause – the rest don’t matter.

Today, as I discussed the same with a friend, she quoted an interesting incident. For the past many years, she has been nominating Edhi for the award of CNN Heroes, and yes, all the people winning that award in the past years have been very deserving, but so is Edhi.

If the West were watching us so closely, if they so want to make a difference in our part of the world, how is it that Edhi has never been recognised at an international, global level? How has he not been given grants, aid, charity and awards for his lifelong tireless commitment to God’s humanity? What does he need to do differently to get the recognition we all want for him?

In this moment, Malala deserves the peace prize, as did Rosa Parks a few decades ago, but so does Edhi. His image may not be right for the West, his gender may be wrong, but his humanity is godliness – a godliness that must be rewarded in this world before it becomes nothing more than just a chapter in Pakistan’s history.