A tale of self-destruction: I am what they call a “functioning” alcoholic 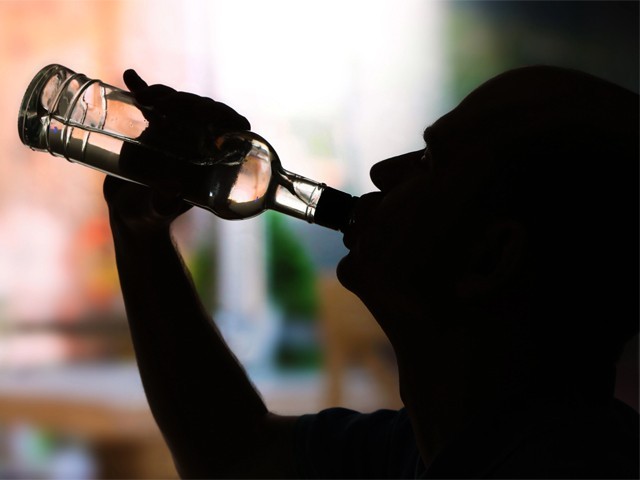 The mind of an alcoholic has a rationality of its own where the need to have a drink overrides everything else. PHOTO: SHUTTERSTOCK

It is 6:30am. I am up and feeling that terrible sensation in the gut. I look at my wife, who is sleeping peacefully, oblivious to the fact that I am up and about to indulge in my daily ritual. She knows, but does not know the extent to which this vice has engulfed me.

I drag myself to the restroom of the other bedroom and see my reflection in the mirror. My face is summarising the story of my last 10 years. I am 40 but can be easily mistaken as a person of 50. The face which a decade ago could be considered handsome, appears haggard and a closer look reveals tiny red veins sprouting around my nose and upper cheeks.  While looking at my own reflection, I am instantly reminded of how conscious I used to be of my looks when I was young. Now, it does not seem to matter at all.

My hands have already begun to shake. It is 8:30am, I have to leave for office. Now, I have a choice to either quickly gulp it as much as I can in one hour and then take a shower, followed by a heavy breakfast. The risk is that once I start, I might not be able to stop after one hour and may have to either take a day off or go in late. Another option is not to indulge in it now and wait for late night when my wife is asleep. She sleeps early as she comes back from the office relatively late and then falls asleep rather quickly.

The option of not indulging in it does not simply come into my decision-making, even though last night before sleeping, I made a promise to myself that I won’t touch it. Like hundreds of identical promises, which I have been making to myself over the course of several years, this one also does not even survive my barely six hours of sleep.

I go to the refrigerator, fetch a can of Diet Pepsi and then extract the vodka bottle from underneath a pile of clothes. I mix them, keeping the ratio of two to three and take the first sip. The moment I take the sip, the shaking of the hands begins to ease and a euphoric sensation ripples through my body and mind. A typical day in my life has begun. As I start to drink it, anxiety also starts receding quickly. One hour passes quickly and it is 7:45am. I have already consumed four drinks. I am now supposed to take a shower, but I decide against it. The euphoria which I am feeling is too great.

In my case, once I start, I cannot stop, and moreover, alcohol is a daily ritual. In fact, my waking hours revolve around accommodating alcohol consumption. Since I have to keep it hidden from my wife, I drink when she is not around or is sleeping.

I will miss family functions, go late to the office or even take a day off, just to drink.

But at the same time, although I am an alcoholic, I am what they call a “functioning” alcoholic, and despite my addiction, I am still maintaining a veneer of stable professional and personal life.

Today, I will go late to the office but will still go.

At 8:30am, I tell my wife that I will go late. Despite the fact that I am heavily drunk, she cannot notice. Over the years, my tolerance level has increased to such a level that I appear normal to almost everyone. Even the slur in the voice is barely noticeable.

At 9:30am, I take the shower I was supposed to take two hours ago. At 10:15am, I am on my way. The high is wearing off, and very soon, I will start experiencing a headache, which may last for several hours, during which I may once again make a promise of quitting it from tomorrow! That’s what alcoholics are – making promises to themselves and breaking them, almost daily.

They say alcoholism is the outcome of some sadness or depression. They say you take to the bottle when you are going through personal trauma or setback. Frankly, this is not true in my case. When I started drinking a decade ago, I was not going through any setbacks. Perhaps there were some deep-seated personality issues, which ended up making me an addict. In fact, I started drinking pretty late in my life. But the moment I started to drink, I became enthralled with it. Alcohol soothed my hyperactive nerves and allowed me to get over my worries. Alcohol gave me euphoria and calmed me, but at the same time, it made me addicted to itself.

A love affair started, all-consuming, between me and the bottle. It was passionate and like all such affairs, destructive. Initially, I drank in social gatherings, where alcohol was present – despite the taboos, alcohol is quite common in Pakistan – but soon discovered that my inability to stop often led to embarrassing situations. So I decided to drink alone and secretly.

Soon after, occasional drinking in the morning started as I found out that one achieved a better high in the morning. I would at times go to the office drunk and at times, would take alcohol with me. Gradually, alcohol started to engulf me. They say it is social glue, but in my case, it led to withdrawal; I often started making excuses for not accompanying my wife to attend functions. She would go and I would often stay behind and drink.

But drinking made me more conversant; I would often call friends while drunk. When you drink, at some point, you like to talk. On days, I did not go to the office, or when my wife was away to visit her parents in Lahore, I would just randomly call people while drunk or post overly emotional posts on social media. Alcohol was lowering my inhibitions and severely affecting my decision-making calculus.

In such moments of madness, I started to exchange messages with an office colleague who was married and older than me. I was always drunk when I used to do that. Gradually, due to lower inhibitions, the messages became flirtatious in nature. She initially resisted and then started responding. The moment you start online intimacy, betrayal of your spouse starts. One thing led to another, and in a few months’ time, we were having a full-blown affair. I was now cheating on my wife also, something I would not have done if I had not become an alcoholic. My addiction was now also destroying my moral fabric completely. I had now become a completely shameless person who was blatantly destroying the sanctity of marriage and betraying the trust of the person whom I loved intensely.

Over the years, despite loving her, I veered away from her. In fact, I had started to even before the affair started due to my need to be alone to drink. I often used to sleep in a separate room, a practice I have put an end to only in the last few months.

Professionally, my career also suffered. After all, you don’t work effectively in a hungover state. Likewise, when you drink in the morning, at times, you become too intoxicated to go to the office. Leaves piled up in my case, obviously affecting my appraisal.

Physically, I am beginning to see the effects. My weight has gone up in the last few years. My face has become puffy and haggard. I am hardly able to sleep for more than five hours and that too is interrupted. My body aches all over, and despite all of this, I am not able to stop.  I am slowly but surely drinking myself to death. I am too scared to even get my liver examined.

To some, I will appear as just a weak-willed person, from a privileged background, who cannot control himself. I don’t blame them for thinking like that, but at the same time, they don’t know what it is to be an alcoholic. We can only fairly decide about others, once we have experienced the same. Only when you have fought with internal demons, you realise what it is all about. The mind of an alcoholic has a rationality of its own where the need to have a drink overrides everything else. Your day revolves around creating time and situation, to gulp it. In my case, my life is now revolving around it.

I have at times, tried to stop, but I don’t recall ever going beyond a month (that too a few years ago) and during every period of abstinence, I kept on having dreams of alcohol. Once I remember, it went on for three months. I thought it was safe to indulge again, and the moment I drank again, it was back to the old routine. With the passage of time, the “dry” time period has shrunk to an average of two days. The withdrawal symptoms become so severe that I am forced to drink again.

I have thought of going to a rehabilitation centre, but I am afraid that the world will know and more importantly, my wife will know. Moreover, the taboo around alcohol is too strong in a religious and conservative country like Pakistan. If someone finds out that I am a hardcore drinker that alone is going to lead me into big trouble. And if the fact that I am seeking treatment for alcohol abuse becomes known, this might be the end of life as I know it. The word “treatment” indicates a severity, which though applicable in my case, will also lead to a complete destruction of the world as I know it.

The purpose of this blog is not gaining sympathy. I am an addict, but it was my choice to become one. I could have left it when I had the ability. However, I did not, and once I made a conscious decision to continue, after a certain point, it completely took over my life. Justice demands that I must suffer the consequences and I am. The purpose is to point out the dangers of alcoholism as it destroys an individual, his career and marital life. Due to taboos, social stigma and fear of prosecution, alcoholics cannot even seek help. We need to discuss these things so that we make the atmosphere more supportive of such people.

The writer used to be an ambitious person but is now fighting a losing battle with his internal demons. He wants the world to know the dangers of alcoholism.

How I became a drunken, cheating swine who destroyed his marriage