Forget the weapons – he was carrying alcohol! Taubah Taubah! 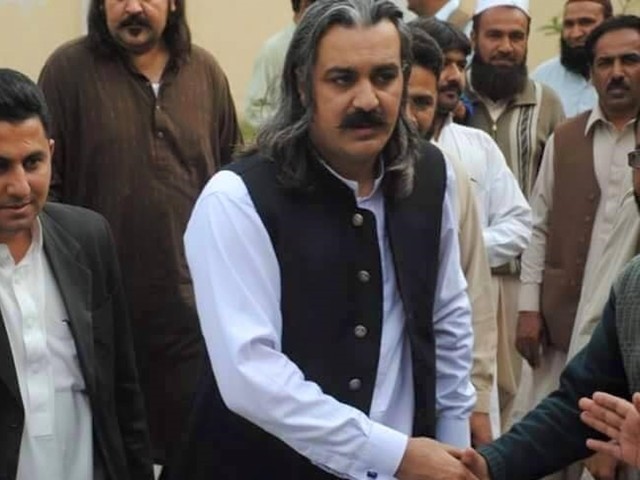 Pakistan Tehreek-e-Insaaf (PTI) leader and Khyber-Pakhtunkhwa (K-P) Revenue Minister Amin Gandapur has been in the news ever since Kalashnikov rifles were recovered from his vehicle. PHOTO: PINTEREST

Pakistan Tehreek-e-Insaaf (PTI) leader and Khyber-Pakhtunkhwa (K-P) Revenue Minister Amin Gandapur has been in the news ever since Kalashnikov rifles were recovered from his vehicle. The problem wasn’t the rifles though. The problem was the bottle of whiskey.

This is not the first time that possession of alcohol by a public figure has given our moral police a field day, and nor will this be the last. Back in 2011, Attiqa Odho was caught at Islamabad Airport with wine bottles in her luggage and the daggers were out. More recently, Jamshed Dasti, the MNA from Muzzafargarh, made a lot of noise when empty alcohol bottles were discovered outside the parliament lodges. Taking the moral policing even further, a petition was recently submitted in the Sindh High Court against liquor stores Karachi.

Despite being banned for Muslims in 1977, most of the alcohol consumed in the country today is by the Muslim population. Whether it’s the licensed wine shops in Sindh, or bootleggers operating in other parts of the country, access to alcohol is hardly difficult. But even though the consumption is wide-spread, the moral police is out for blood every time sometime is ‘caught’ in the possession of these supposed evil beverages. Once should perhaps ask them – which one of Pakistan’s problems did the ban on alcohol fix after 1977? Additionally, which one of the country’s problems today, if any, is a result of alcohol consumption?

Like many of the ills facing Pakistan today, our problem with alcohol stems from the same thing many of our other problem stem from: the inability to leave a fellow person’s personal life alone. The beverage a person consumes, the number of prayers he or she offers, the status of his or her romantic life etcetera are not personal matters – they are public matters which going by the parameters created by our moral police, define the character of our fellow person.

While the moral police has been busy rejoicing every time alcohol is confiscated, what they have failed to notice is that not having legal access to alcohol has resulted in an increase in the shift towards street drugs. As things stand today, Pakistan has one of the highest heroin addiction rates in the world. Not only that, there has been a significant rise in the number of deaths via poisonous alcohol amongst people who cannot afford higher grade alcohol and thus rely on home-made brews which have the potential of containing methanol. Most recently 10 people lost their lives after consuming poisonous alcohol in Jehlum.

Where then, is the moral police when these deaths take place?

Fermented drinks have been running through the subcontinent’s veins as long ago as 1200 BC in the form of a beverage called Soma. More so, the history of distilled spirits began in the subcontinent in the geographical area that is – you guessed it – modern day Pakistan!

The moral police needs to take a take a step back, and concentrate on the real problems. Alcohol certainly isn’t one of them.