#SalmanVerdict: 7 ways Twitter made the best jokes out of a ‘horrible’ situation 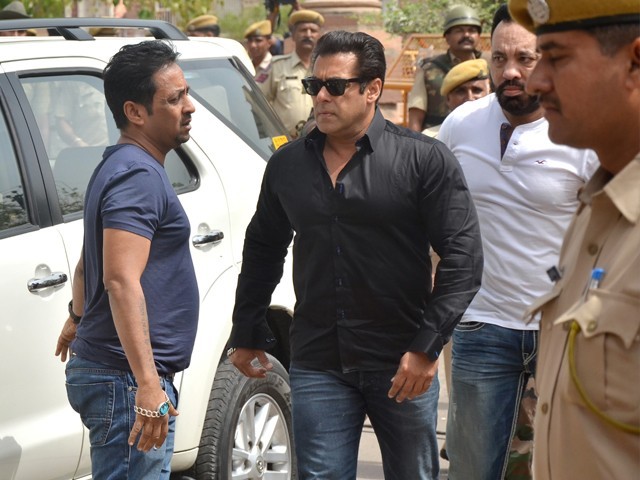 Indian Bollywood actor Salman Khan arrives at a court to hear the verdict in the long-running wildlife poaching case against him in Jodhpur on April 5, 2018. PHOTO: AFP

It is undoubtedly a sad time in the world. One of the most “respected”, “kindest” and “greatest” people on the planet has been convicted of a crime he committed some 20 years ago. Obviously, we are all in mourning as we see the harsh punishment sentenced to “a great human being”, whose only taint on his record includes domestic violence, hunting illegal animals and killing an innocent man sleeping on the footpath (allegedly, as we are all aware).

Of course, these tragic times have compelled fans from all over to defend Salman Khan and protest the harsh laws that exist to punish criminals. Topping the list of defenders was our very own actress and woman who thinks human rights lawyers shouldn’t have a job, Mawra Hocane.

In a world with no “NO” human rights, a great human being is being punished for killing an animal umpteen years ago under animal rights. Bash me all you want, but there’s something completely wrong about it.. mind you such human beings are our saving grace! #SalmanKhanVerdict

It is indeed a sad day when courts in India, not known to deliver justice frequently, finally follow through on their judicial system and sentence Salman to some jail time. In a world with ‘no’ human rights, why are Indian courts trying to improve the world order by punishing people for their crimes?

Yes, Salman killed an animal, but have we forgotten the major contributions that he, being the “saving grace” of humanity, has done for the world? After all, his campaign is called ‘Being Human’, not ‘Being Animal’.

Salman may have illegally killed an animal, may have allegedly domestically abused Aishwarya Rai Bachchan, and may have allegedly run over a man sleeping on the footpath, but are these crimes anything compared to how much he does for people? What does he do for people precisely, you ask? A lot, his fans will inform you, and leave it at that.

Interesting how we’re all ignoring the law stating that because he is the ‘Bhai’, he is automatically acquitted of all crimes, even the ones he hasn’t committed yet. Because Bhai can never be in the wrong. Bhai is most definitely God’s right hand.

Thus, Bhai fans are observing a day of mourning as they worry how Salman, a man innocent of everything but his crimes, will survive in prison. The Bollywood fraternity, on the other hand, is worried, for who will be the new Johnny Bravo of the industry? Now that Salman is in jail and can’t dance awkwardly or take off his shirt to utter a cheesy dialogue, writers in the industry will have to come up with an actual script to make money.

The best part of this hullabaloo, as always, has been Twitter. If one wants to really see how to make the best of a ‘horrible’ situation, they should turn to this social media site! The following are just some of the best jokes made on the internet after the revelation of this sad, sad news.

Everyone knows about the rivalry between fans of all the iconic Bollywood Khans, making this the perfect opportunity for fans of King Khan to celebrate. If this doesn’t count as a victory for Shah Rukh, we don’t know what does.

2. When Salman’s films provided the perfect opportunity for a joke

All of Salman’s films have become iconic in some way or the other, but we’re pretty sure this is not how he intended for them to be memorable…

3. Vivek Oberoi was (rightfully) brought in

We’re sure Vivek has always been jealous of Bhai, but then who wouldn’t be jealous of the acting skills hiding all the way underneath his muscles?

Unless you live under a rock, you must be aware that umpteen years ago, Salman used to date Aishwarya. After they broke up due to his abusive behaviour, Aishwarya eventually started dating Vivek. Because he is such a good person, Salman ensured that Vivek paid for this relationship by threatening his career. After the passing of so many years, Vivek may have forgiven Salman (we hope not), but the internet, on the other hand, never forgives an opportunity for a good joke.

The irony of Salman getting acquitted in the hit-and-run case (after being convicted, no less) and then randomly getting convicted for the case everyone had forgotten about, was clearly not lost on Twitter.

After all, Bhai wasn’t drunk, the car was!

Hit and run victims after seeing bhai getting convicted for killing a blackbuck. #BlackBuckPoachingCase pic.twitter.com/38VrMgo3NA

5. It was easy to empathise with the blackbuck

Who knew blackbucks were so cute?

When you are dead for 20 years but someone tells you that Salman khan convicted in #BlackBuckPoachingCase pic.twitter.com/exG49afYJ7

6. There were obvious concerns about Salman’s movie schedule

7. And of course, a little something for the die-hard fans

Knowing Salman’s level of influence, once he’s out tomorrow, the jokes are all we will have left.

Later:
Salman out on bail.

Don’t leave us, Bhai! We are not prepared to watch intellectual movies just yet! Come back to us and prove that,

(Catching Don is not only hard, it is impossible…)