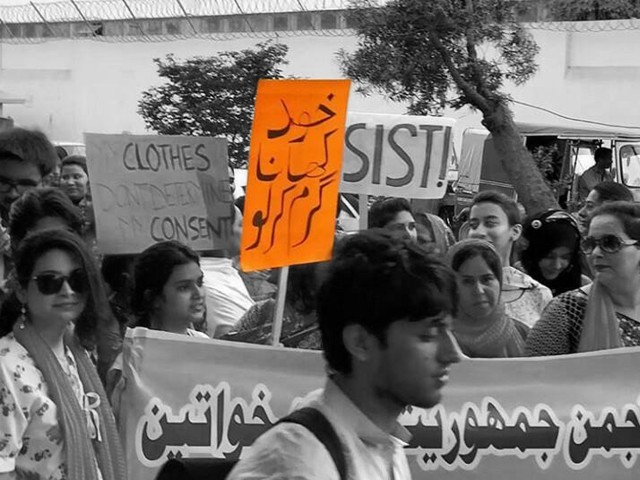 Tongue in cheek, and effortlessly simple, the slogan has hit a nerve with almost everyone who came across it. PHOTO: FACEBOOK

There is very little doubt that the #MeToo socio-political statements on the internet are among the most powerful ones in recent history. Spreading virtually across the entire globe, the online movement has gathered its fair share of attention in Pakistan too and thankfully so.

The recent Aurat March was proof of this movement affecting this country. What began as a protest against sexual misconduct, has now raged into something much bigger. It holds even more meaning in countries such as Pakistan, since not only is sexual misconduct ripe here, the country is still home to an extremely patriarchal society.

The Aurat March had its fair share of brilliant slogans, but perhaps none better than the ‘khud khana garam karlo’ (heat up your own food) poster. Tongue in cheek, and effortlessly simple, it has hit a nerve with almost everyone who came across it.

A common argument is that the women’s movement is a much bigger issue, and not one that is limited to posters commenting on household responsibilities.

This is completely correct.

However, if that criticism is raised, one needs to remember that the Aurat March included many other issues too – quickly skimming through some of the pictures from the march should clarify that.

But regardless of the fact that the Aurat March represented something much bigger than who heats up the food, why the backlash over bringing it up? Have we not grown up in households where tasks in the kitchen were limited to women? Whether it be our mothers, wives, sisters or maids, the kitchen is still supposed to be a lady’s domain. Accomplishing those tasks in the kitchen to serve men was, and disappointingly still is, a woman’s job. Have we forgotten the “go make me a sandwich” jokes that went viral on the internet? Have we forgotten “women belong in the kitchen” statements that have been thrown at women? These are not mere statements and jokes, these are realities that women go through, especially in a country like Pakistan.

This isn’t a practice limited to Pakistan of course – it is something prevalent in virtually all male-dominated cultures. While some cultures have transformed for the better and now see much more equality among genders in household tasks, most cultures do not.

In the midst of all the uproar a video that caught my attention was one by Laiba Zainab, aptly titled ‘ab khud kar lo khana garam‘ (now heat up your own food).

It would make for rather uncomfortable viewing for people already enraged over the Aurat March, and it is obvious to see from the way people have reacted to it.

The answer to these questions is a big, fat NO! Women’s role in society has been highly domesticated; even if a woman works, she is expected to do so without neglecting “her responsibilities” at home. There are many women in this country who have to give up their jobs because the in-laws are worried that they will not be able to attend to the family’s needs at home. There are those who have to leave their professional lives because they now have children to take care of too. Clearly, then, the share of responsibilities is unequal.

What makes this criticism more disappointing is that when it comes from individuals who have otherwise been exposed to higher education and a progressive worldview. The common arguments include, but are not limited to,

“This is generalisation of the highest order and all Pakistani men aren’t like that,”

“This is dividing men and women by spreading hatred.”

So on and so forth.

Every single male may not have contributed to build the massive walls of patriarchy that exist in Pakistan today, but they have contributed enough to take collective responsibility for their gender’s actions. The least we can do is realise our privilege as men in the society and stand up for women’s rights.

The rise of Bilawal Bhutto Zardari: Much more than a poster boy of Pakistan’s family-dominated politics