To the women of Pakistan: Get out there, march and reclaim your space! 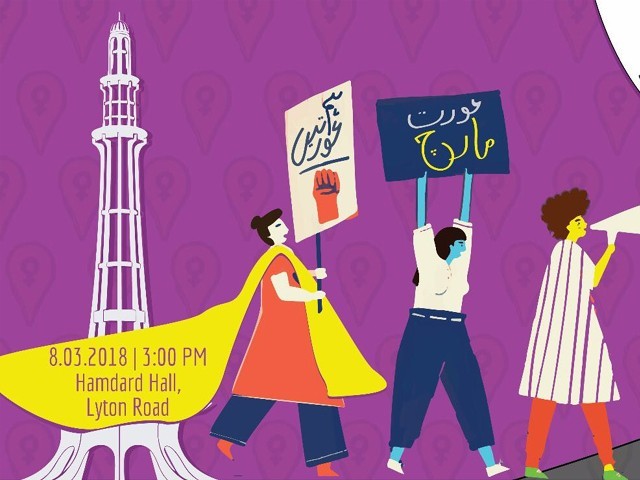 With the Lahore Aurat March, we have attempted and tried our best to engage women from all backgrounds. PHOTO: TWITTER/ AURATMARCH2018

For this year’s International Women’s Day, Pakistani women from Lahore, Karachi and Islamabad have decided to stick it out together, get out on the streets of their respective cities, and march to reclaim their space in the public sphere. The event, called the Aurat March, is planned and organised entirely by a diverse group of women belonging to different ethnicities, classes and sections of our society. The march itself is not linked to a particular organisation, nor is it initiated or funded by any political parties or groups, and all women (and men) are welcome!

Pakistani women from all stages of life getting together to organise the Aurat March has been an absolutely phenomenal and life-changing experience, to say the least. I can say with certainty about the march in Lahore – where I was part of the group of women who organised the event – that it has taken a lot of passion and dedicated effort to plan this peaceful demonstration, which is to start at Hamdard Hall on Lyton Road at 4pm, and will go all the way to Charring Cross crossing the Punjab Assembly.

'Marching is a political and emotional committment, one that is not only dependant on funding​' – Sheema Kermani

Across the world and throughout history, we have seen women on the front line of various movements and revolutions, as they came out to demand their right to vote, or to protest crimes against their gender. As they pushed for more inclusivity and progress, their passion was often mistaken for fury, and they were declared hysteric or crazy, and treated accordingly.

In Pakistan alone, who can forget the work done by organisations such as the Women’s Action Forum (WAF) to reclaim the status of women, at a time when the state itself was treating them as second class citizens? So many women from the older generation of feminists have poured their blood and soul and fought to ensure the position women are in today, and today we march to honour their legacy.

Over the past several years, Pakistan has had more of an awakening when it comes to women’s rights. More and more women are taking note of the scale of injustice and violence against women and the absence of basic rights for them in the country, and as a result, are becoming more aware of the everyday sexism they face in private and public spheres. The past year, in particular, where the news cycle was dominated with stories of women being raped and murdered, has made it imperative for there to exist a unity amongst these women in order to tackle the very real issues they face in our society. And perhaps it is losing a champion in the face of Asma Jahangir that has made a political demonstration the apt way to pay our respects and honour the woman who fought tirelessly for our rights, in an era where the system was against us. Today, women will join hands and participate in the Aurat March to show solidarity not only for other women, but also against a misogynistic culture that unfortunately continues to prevail in every part of the country.

Perhaps this will sound cliché, but no one can deny that women’s rights are gravely important for the functioning of a society. It is a fact that, for any country to move from developing to developed, the women have to be educated and be more involved. What women want – what everyone should want – is a society in which women from all ethnic backgrounds, religious communities, including low income, working class, displaced, refugee and differently-abled women, as well as persons with all gender identities, can exercise autonomy over their lives and build a peaceful, healthy environment, one where they can rely on a fair justice system to support them in times of need.

Therefore, this International Women’s Day, women march with an aim. Not only do we demand safety, rights and justice from the state, we also aim to show resistance by reclaiming our spaces on the streets, which have been largely restricted to and occupied by men. The Aurat March will be an example of power through mass action, as we join hands to share and fight the struggle together.

Guidelines for the Aurat March tomorrow! See you there! #aaohamaraysaathchalo pic.twitter.com/JNhjH5r0kN

The agenda of this march is to demand the most fundamental rights as women; human rights that are so easily granted and reserved for men. These demands include, but are not limited to, an end to violence against women, labour rights, reproductive rights, environmental justice, anti-sexual assault laws, wage equality, fair political representation and opportunities, education equality, equality for the transgender community and an end to child marriage and honour killings.

This form of political mobilisation of women is something many of us in the current generation are seeing for the first time, and our main objective here is to ensure that Pakistani feminists are part of the bigger movement to construct a world where there is no discrimination or oppression.

Come out for your sisters, mothers, friends, colleagues, comrades! Come out for Asma, Perween, Sabeen, Qandeel and all those who have struggled before you! And last but not least, come out for yourself! Karachi, Islamabad, Lahore, let's do this! #AuratMarch2018

With the Lahore Aurat March, we have attempted and tried our best to engage women from all backgrounds. Some of the organisers are experienced in building such movements, but for a lot of us, this is a first, which is why we all unanimously concluded that we are allowed the time and space to make some mistakes and learn from our experiences. As long as we get women out on the streets and start a conversation around women’s issues, we believe that, per se, would be a big accomplishment at this early stage.

On a personal level, many women in the organising team also visited various schools, colleges, and events to help spread the word. In addition, each of us has been reaching out to domestic workers, factory workers, and women who work at home, and have tried to involve as many women as we can from the informal sector. Representation from all corners of the society matters immensely, and no women’s march can take place without the involvement of women from all spheres of life, especially in Pakistan, where women are more commonly found in the private sphere than in the public one.

Yes, the internet and social media are great tools for advocating change, raging, and even for running campaigns. However, truly being part of a movement actually means getting out there and displaying as a united front what it means to be passionate about equality, dignity, safety and opportunity.

From This International Women's Day onwards, let's try to practice EQUALITY every day! Video credits: @inshabukhari and all my other fellow people who have worked tirelessly and contributed to making this video! It have been an overwhelming experience to see so much support amongst the Aurat March organizers, the dedication towards making this world a better place exists everywhere and we have come together to do something about it. See you all at the Aurat March today at 4PM, Hamdard Hall, Lyton Road, Lahore. #InternationalWomensDay #IWD2018 #Equality #Barabar #Equity #Feminism #Revolution #SayNOtoSexism #Women #AuratMarch #AuratMarch2018 #SmashThePatriarchy #RaiseYourVoice 🤘🏼

My only hope is that our resistance continues to be relentless, and this kind of solidarity proves to be visible every year from now on. The Aurat March has taught so many women the importance of mobilisation for a cause; a mobilisation that has been largely absent for women, even as the rest of the country mobilises for political causes on a regular basis. It was heartening to work with a great group of women, as we helped each other learn and participate in the first of what will hopefully be a growing list of marches. While the march itself was always the end goal, it remains an honour for me to be part of this wonderful group of supportive, intelligent and driven women, with whom organising this event was just as fun as it was empowering!

To all the women in Karachi, Lahore and Islamabad – this International Women’s Day, get out there and march!