Dear Vogue India, we don’t need fashion magazines to remind us of colonisation 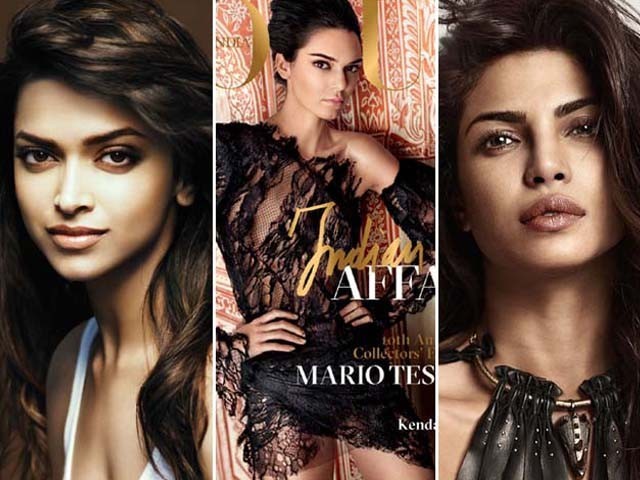 Though many of the outraged Indians expressed how Indian Bollywood actresses like Priyanka Chopra and Deepika Padukone could have featured instead of Jenner, I wonder why Vogue India didn’t look beyond supermodels.

No woman across the world would hear the words, “women’s fashion bible” and not equate them with the most eminent fashion magazine globally, Vogue.

Today, Vogue is not just a fashion magazine but a source of inspiration for women across the planet. One of the most significant aspects about the magazine (published in 23 countries) is that it has become a synonym of women empowerment, their individuality, their success, and also a testament of how important they are and how far they can go.

Apparently, Vogue presents that exclusive world. It is a voice that talks to millions of women.

“The Indian woman has begun identifying her style, one that doesn’t simply ape the West, or stick to traditional Indian wear. We want to monitor that change.”

Yet, Vogue India thought of taking away the few opportunities that brown women get to glitter, by giving it to a super popular white woman Kendall Jenner, making her the face of Vogue India’s 10th anniversary cover titled, ‘Indian Affair’.

As if we were not already fed up of the western idealisation of beauty that you conveniently thought of reinforcing the stains of colonisation in our minds once again?

Ideally, this edition was a great time and opportunity for the magazine to debunk all the myths surrounding the western idealisation of beauty that are still prevalent in India. Vogue India could have easily captured the beauty of a brown girl, applauding her skin, charm and prettiness, reaffirming the belief that brown women are beautiful the way they are.

But no! They decided to go with a popular white American model on the cover. They not only acted irresponsible, but were downright mean to millions of women in India and South Asia who are judged for their skin tone on a daily basis.

Off late, when India is battling consistently towards colourism, it is really shameful that one of the leading publications in the country simply doesn’t feel the need to serve the real interest of its audience. Instead, it placed someone on their front cover that Indian women can’t even identify with.

How can the dark-skinned Indian women feel empowered and comfortable in their own skin when a women’s magazine openly endorses the concept of ‘white is right’ by featuring an American reality star who literally has no connection with India or its culture?

Though many of the outraged Indians expressed how Indian Bollywood actresses like Priyanka Chopra and Deepika Padukone could have featured instead of Jenner, I wonder why Vogue India didn’t look beyond supermodels.

Did all the 1.2 billion Indians die that they put her on the cover #vogueindia pic.twitter.com/HkZH4m0uFF

So many stunning women in #India & #vogueindia goes & picks #KendallJenner to grace its cover. She's beautiful but they've got it all wrong.

in a culture where girls are encouraged to use skin-whitening creams and bleach, picking Kendall Jenner for #vogueindia is a step backwards

Honestly I'm just so disappointed in Vogue India. How do you celebrate the 10th anniversary of Vogue India… without an Indian?!?!?! https://t.co/P5oxqUdJ78

In a country like India where patriarchal values are rampant, Vogue India could have indeed rocked their cover had they chosen to showcase the real Indian woman on its 10th anniversary cover. How about an acid attack survivor? Any successful Indian woman entrepreneur who broke all the odds to reach the milestone? A rags to riches story (we have plenty!)? Or perhaps just an ordinary Indian woman? Don’t you think that would have been more sensible to relate with the everyday life of a woman in India? Don’t you think that would have been more apt to something that goes by the title, ‘Indian Affair?’

Vogue India, we don’t need fashion magazines to remind us of colonisation; be insensitive towards our women and culture, or simply prick us where it hurts the most.

In the end, however, it is quite noteworthy to see the reaction of Indians – no, Indians did not swoon over an American supermodel on the cover of a desi magazine, but questioned her very presence. It is time these magazines and companies get off their capitalist mind-set and know they can only sustain themselves if they serve the real interests of their audience.