The problem lies not within the Pepsi advertisement but with us 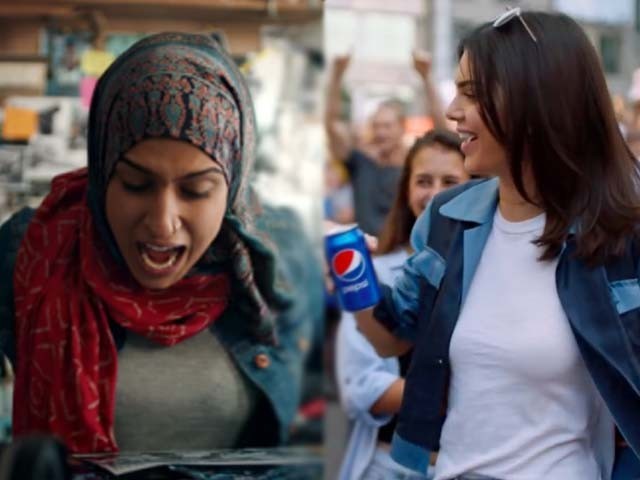 We who live in this world are weathering a racist and stereotypical wave of hatred that has transformed anything and everything into suggestive discriminatory actions.

Maybe Kendell Jenner and the marketing department at Pepsi could have gotten away with their new advertisement if they had decided to air it on April 1st instead of April 4th.

The backlash it received was enormous. So what exactly happened there?

Well, it was just another company using several attractive people of different cultures and creed to sell their product. Was it something that has never happened before? Of course not! All corporate set-ups, industries and businesses have done this countless times. Then why has it become a matter of offence and a subject of absolute ridicule? The answer is one word – timing!

It starts with a mixed race crowd that looks quite ‘put together’ even at a first glance. People have also complained that the crowd was a bit too ‘attractive’ for a real life street protest. But that’s the most forgivable oversight of the entire advertisement. As the crowd edges on with a rather earthy and carefree air (as opposed to the real life protests where one could cut the agitation with a blunt knife), the camera focuses on Jenner posing for a high fashion photo shoot in a blonde wig. Suddenly, she is beckoned towards the crowd by a cute cellist who smiles at her.

In an all too familiar moment of epiphany, she swipes off the wig, passing it on to her assistant (a black woman) and wipes off her loud lip colour. She walks through the crowd finally arriving in front of a formidable formation of some sharp looking policemen and offers one of the officers a can of Pepsi. In a not so surprising reaction, he accepts and drinks it. And the people rejoice while a Muslim woman captures this moment with her camera.

So why did this poorly crafted advertisement face such an overwhelmingly negative reaction?

Well, it did not help its chances that along with the mixed and matched crowd of suggestive victims of discrimination, there was a woman in a headscarf with a camera. She is the perfect Muslim woman with a scarf signifying her religion, a camera signifying her liberation and her very presence signifying a complete lack of consideration; all to sell a can of bottled carbon? But then again, isn’t it what every real life protest in the world is doing right now? These veiled Muslim women are being symbolised through all ways and means possible, so I guess it should not come as a surprise that she was shown with a camera and not a bruise on her face or crying a baby hanging from her side.

We who live in this world are weathering a racist and stereotypical wave of hatred that has transformed anything and everything into suggestive discriminatory actions. As the tolerant mask of the American social mascot has been torn off, what we see is the truth, which is that we are not as evolved or modern as we deem ourselves to be. Racism, religious discrimination and stereotyping have always been rampant. They still swell in numbers and intensity because if they hadn’t, then we would have seen this advertisement as only the directorial disaster that it was, not as a prejudiced outrage. The placards were absurdly labelled because apparently the goal was to create something that went beyond all races, colours and social disparities. Sadly though, it ended up doing the exact opposite.

When people unaffected by police brutality start explaining why the #PepsiAd is 'actually progressive' pic.twitter.com/ORsGG6ohtu

To clarify, I'm pissed at the #PepsiAd bc this is what happens if you walk toward police barriers. No soda protects PoC from police violence pic.twitter.com/6lrNluHUBf

I mean, we knew it was going to happen, right? #PepsiAd #capitalism #commodifyingtheresistance

I agree that the advertisement could have been created with more dedication and common sense but the reaction to it is what troubles me the most. The reaction just shows that we are getting only what we sent out into the world before. We send out intolerance, self-righteousness and arrogance into this world. What we receive is only fair. The advert had to be taken down and apologies had to be made.

@BerniceKing We at Pepsi believe in the legacy of Dr. King & meant absolutely no disrespect to him & others who fight for justice. pic.twitter.com/rM8W8i0Euu

But is it only Pepsi that is responsible for this fiasco? Their advertising campaign was to sell their product in question which they managed to do quite poorly but the intention behind all this was probably not as absurd. It was just an advertisement that risked aiming higher; too high for their lack of a proper foundation and idea execution. The backlash it caused was both justified and over the top at the same time. This is precisely the problem of modern television and social media; between what is shown and what is mocked, the real message is usually lost!