Why is Sana Safinaz plagiarising and giving copy-right notices at the same time? 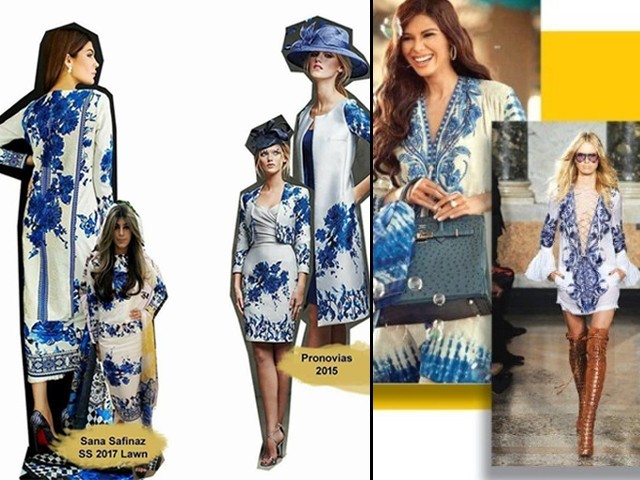 Sana Safinaz is under the spot light once again and for the same reason – plagiarism. PHOTO: SECRET BUYER

Ever look at those expensive designer dresses in the display windows and felt sad? Ever felt left out because you couldn’t possibly afford to buy a Dior or a Balenciaga dress? Fret not, for Pakistani designers have a genius way of saving you of this misery.

No, no, I’m not talking about cheap knockoffs. Oh no. This is a strangely real deal. You’ll still be wearing designer clothes, probably might even cost an organ, but you’ll be halfway there on the social ladder.

One of Pakistan’s leading fashion houses, Sana Safinaz is under the spot light once again and for the same reason – plagiarism. This time they were copying designs from Pronovias, a Spanish brand. This isn’t the first time they have done so as they’ve also copied Zara designs before. Old habits die hard I guess. I wonder if this is supposed to enhance the brand’s value. One wonders what goes through their minds when they promote their designs: Hey look, we don’t just sell original prints. We sell copied from famous designer prints as well which you wouldn’t be able to afford otherwise! 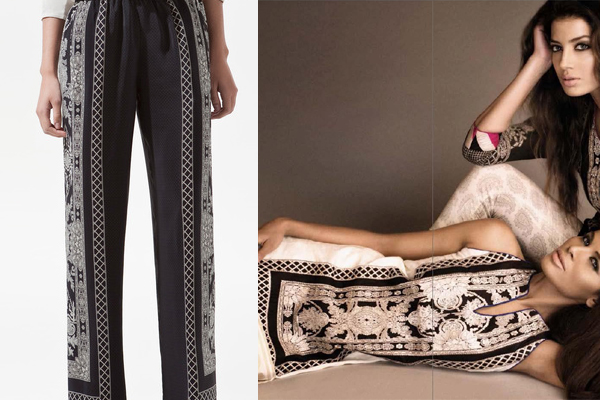 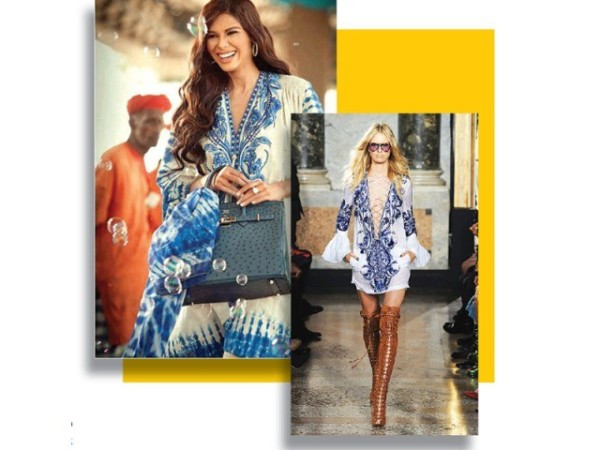 It would have been acceptable, as many others from the industry do it as well, but where Sana Safinaz took a hypocritical turn is when they issued this notice where they’re warning ‘copycats’ not to plagiarise their designs and sell at cheap prices.

I couldnt have find a better birthday gift than this for you @aamiriat .. Happy Birthday in Advance {like weeks in advance (sorry mixed it up with some other syed bukhari)} . Its a warning by the brand to all you naughty little copycats in the country!! Picture credit: Omar quraishi on twitter :)

What goes around comes around; you hear that, Karma? You’ve been guilty of this too. Actually, there are hardly any designers in the field that haven’t committed the sin of faulty ‘inspiration’.

Fashion blogger and plagiarism spotter, Aamir Bukhari runs an extensive, and I must say eye-opening, blog on these copycats. Bukhari’s blog collates various design inspirations from catwalks as well as where they even copy model styling. Some of them are direct copies from the fashion shoots.

I had no idea the situation in the Pakistani fashion industry was this bad and disappointing. And from sudden self-pity of being unable to afford most of these dresses, I am now extremely amused. Thanks, Aamir Bukhari, I feel so much better. It’s like a bizarre schadenfreude (malicious joy) of sorts. I’m amused at the level of chaapa culture (copying) that is instilled in these big names while being saddened, on the other hand, by the fact that all these designers win ‘awards’ and are major movers and shakers of the industry.

A long time ago, a friend of mine who worked for one of the big labels in Pakistan told me how this label would exploit interns by getting them to design outfits and then would fire them or just not hire them once their internship finished, despite the label keeping all of the interns’ designs and eventually claiming credit for them. My friend was shocked to find some of her designs hanging in the display of the label’s store windows even though she had not been given a job at the said fashion house or credit for her designs at the least.

We get it. It’s a tough market out there, especially when every third begum has turned into a fashion designer and has a boutique on MM Alam Road or Zamzama Road. We get that the competition is fierce. But the real tragedy here is that, dear designers, there is no dearth of talent in this country. What you’re actually doing is depriving genuinely talented people, and to save a buck or two (okay fine, lots of bucks) you’re taking the easy route of plagiarising designs from unknown brands that the desi lawn-buying, pret-wearing woman in Pakistan has no clue about. She doesn’t know who Balenciaga is but she knows who Sana Safinaz is. She doesn’t know who Tom Ford is but she knows who Ali Xeeshan is. So she’s wowed by what she sees with little thought regarding what patterns were in the Milan Fashion Week in 2012 and are now seen on her sleeve under the brand tag of Sana Safinaz. Isn’t it enough, dear designers, that you’re already employing cheap labour in Pakistan and making thousands of rupees of profits off each dress (charging minimum Rs6,000 per lawn outfit) and have the fortune of marketing your dresses into a fairly gullible demographic that only watches morning shows and scarcely flips through Harper’s Bazaar or Cosmopolitan?

Some time ago, I lived in Hong Kong; it’s one of the most fashion forward cities in the world. Hong Kong’s Central District is host to one of the largest shops of the biggest brands in the world. While I was walking through the cheap street markets in Yau Ma Tei where even the canopied clothes stands had fashionable material, I noticed a dress hanging in one of the window displays of BCBG Max Azria which seemed eerily similar to a dress I saw on Facebook. Turns out, a little known designer, Zari Faisal, had plagiarised BCBG’s striped evening dress and had made it her own. I couldn’t help but laugh in disbelief. 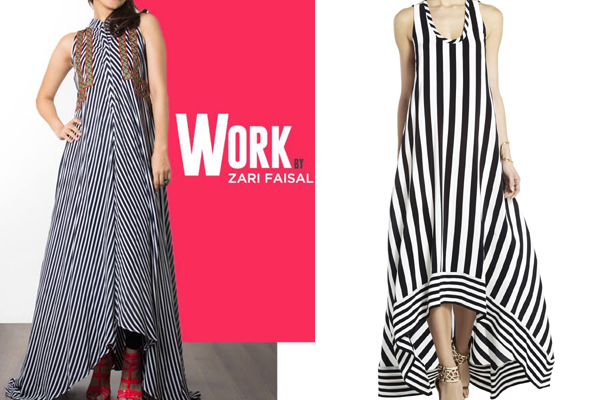 In this day and age of social media, Snapchat and live streaming, do people still do that, I wondered. Apparently so, and that too bluntly I might add.  But thanks to copycat spotters, that won’t be the story for long. Through the keen eyes of people with a sense of integrity that doesn’t come easily in a cutthroat industry, copycat spotters would probably be able to stop these big labels from plagiarising.

If people are paying huge amounts of their hard-earned (or husband’s hard-earned) money, the least these designers can do is not disrespect their trust in your brand. When you hire interns from recognised fashion institutes, don’t use and toss them aside once their talent has been squeezed out by your greedy hands.

As per the words of Nolan Gould from Modern Family,

“In this world, one thing you should definitely strive for is originality. Just be who you are, and be your own person. That’s what will make you stand out.”