Are medicine and engineering the only two feasible options for Pakistani students? 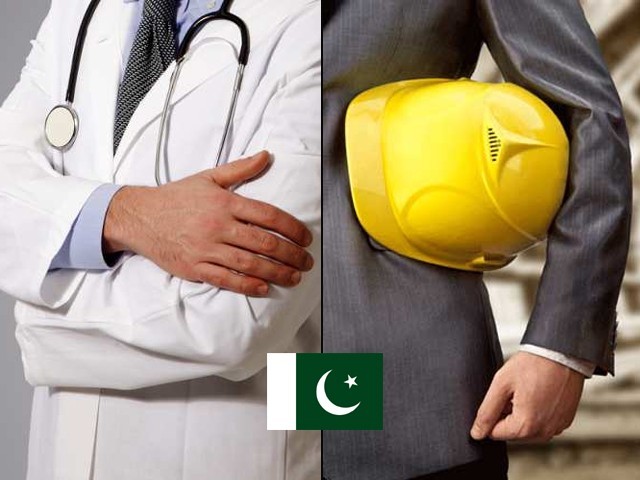 Whether you want to stay in Pakistan or move abroad, medicine and engineering are two fields that offer a relatively better standing, both professionally and economically.

Till a couple of decades ago, engineering and medicine were considered the most sought-after fields for students to pursue professionally. Parents at home and teachers at school would shape the youngsters in order to make them able to qualify for the top-notch medical and engineering schools. The most common statement to hear as a child, whenever questioned about future plans in front of our parents, would be,

(My child will grow up to be a doctor or an engineer.)

Young people never even get the chance to come to this realisation on their own; when it comes to their future, their parents end up taking the lead.

In the last decade or so, however, things have changed quite a bit. As the number of graduates in the medical and engineering profession continued to rise and the job market itself continued to shrink, thanks to the political and economic situation of Pakistan, people began to realise that these two options aren’t the safety net they used to be. People now accepted the reality that they needed to look beyond these two professions at more career options. The advent of social media played a crucial role in developing this mindset, as every struggling individual started using the example of Mark Zuckerberg achieving success, despite being a Harvard drop-out. A lot of new institutions popped up too, offering degrees in media sciences, business administration, mass communication, tourism, hospitality services and so on, and more and more youngsters started getting into diversified fields.

It’s perfectly alright for students to opt for fields of their interest, however, things start getting problematic when they don’t assess the market properly, and begin to live in a fairy tale as they avoid the creeping reality of looming failure. Today, it doesn’t look cool to say,

(I want to become an engineer or a doctor when I grow up.)

Rather, it sounds boring, old-fashioned and out-dated. Yet, if you look at the reality, it appears that these two options are still some of the best career options with the most stability for the youth in Pakistan.

First things first, you have the best chance at immigration if you are qualified as a doctor or an engineer. Call me anti-Pakistan if you like, but the brutal reality remains that once you graduate and get some experience, what attracts you the most is the boards advertising ‘Immigration to Canada’. The hopeless situation of Pakistan pushes one to seriously consider immigration as a possibility, and honestly, I don’t see anything wrong with that. People have been moving across lands in search of a better lifestyle, jobs and security since the very beginning of the human race. In those days, people could easily say goodbye to their beloved homeland without anyone questioning their ‘patriotism’.

Immigration aside, the second factor on the list of most young graduates is having a job abroad. In that regard too, the fields of medicine and engineering are a clear winner by a long shot. Other fields, such as media sciences, business administration and law, are centred on one’s country and region, which is why you won’t find as many opportunities across the world. Yes, exceptions exist for every profession, but visiting any recruitment agency and questioning them about the professions that have the most demand and opportunities will result in the same response – medicine and engineering.

If you want to stay in Pakistan, then too these two fields offer a relatively better standing, both professionally and economically. Especially for those in the field of medicine, there is the great option of starting one’s own practice alongside other employment; a pattern that most medical graduates follow. Engineers don’t have as many options in manufacturing, as utilities are too expensive in Pakistan, while having China next door means that a copy of one’s innovation will be easily available within six months at half the price, that too in the same shop.

Am I resisting the emergence of new fields and the changing of the job market? No, I am not. But I do feel that while the youth should be passionate, they should not completely let go of their grasp on reality. Yes, be inspired by Zuckerberg, but don’t let yourself sink in his story. Remember that while Zuckerberg may be a dropout, he was a dropout from Harvard, and most of the top-notch jobs, even in the US, lie with Ivy League graduates. Do what you love and follow your dreams, but don’t forget that if you live in a developing country of Pakistan’s stature, your chances to succeed are already reduced by half.